What's Bill Barr hiding in the Mueller report? It could be Trump’s grand jury testimony 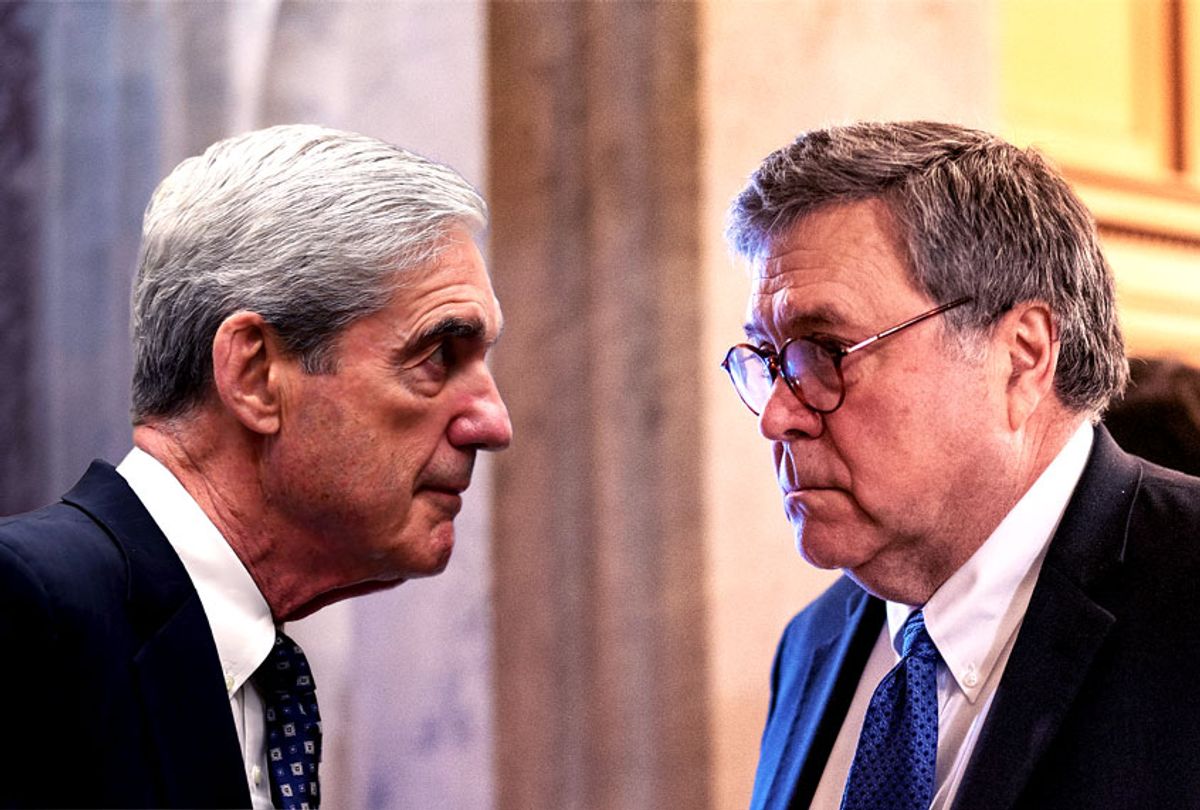 The Supreme Court on Wednesday temporarily blocked the release of special counsel Robert Mueller's report on his investigation into Russian interference in the 2016 election, pending a response from the Justice Department.

The court was considering a House Judiciary Committee request for grand jury materials that the DOJ had redacted from the published report. House lawyers argued the materials are relevant to pending impeachment proceedings against President Trump involving obstruction of justice.

Mueller, citing constitutional concerns, did not reach a conclusion "one way or the other" about whether the president committed the crime of obstruction, though his report made multiple pointed references to Congress' ability to do so.

The Supreme Court did not block the House request permanently. Rather, it put a temporary hold on an earlier order from an appeals court to release the full report to Congress, including all grand jury material.

Judge Judy W. Rogers, writing for the majority in that appellate court decision, argued that the congressional request was standard, and that it was "only the president's categorical resistance and the department's objection that is unprecedented."

If the DOJ fails to respond — which is highly unlikely — Congress will get to see the grand jury information. Most likely, Congress and the Justice Department will square off directly before the Supreme Court, in what could be a historic constitutional showdown.

Attorney General Bill Barr has clung tightly to his redactions since releasing the report to the public last spring. Of all the blacked-out sections, Barr has fought hardest to keep the grand jury information secret.

It is conceivable, according to former federal prosecutors, that some of those redactions refer to what may seem a far-fetched scenario: Mueller's grand jury could have considered the evidence on obstruction of justice, including testimony from the president himself.

A redacted passage in the report suggests that the grand jury saw Trump's written responses to Mueller's questions — which Mueller ultimately found unsatisfactory and which contained various contradictions and, according to Mueller himself, false statements.

Lying under oath to federal prosecutors is unequivocally a crime.

Almost all the grand jury information is in Volume I of the report, the conspiracy section. Volume II, however, which considers obstruction of justice, contains a few isolated redactions that tell the story of Mueller's attempts to get Trump to sit for an interview.

Mueller initially requested an in-person interview, but after going back and forth with the president's lawyers for more than a year, the two sides agreed on written responses.

At the end of that paragraph, Mueller sends the reader to Appendix C for more detail. But there, in the middle of the same narrative, that extra detail is also redacted. 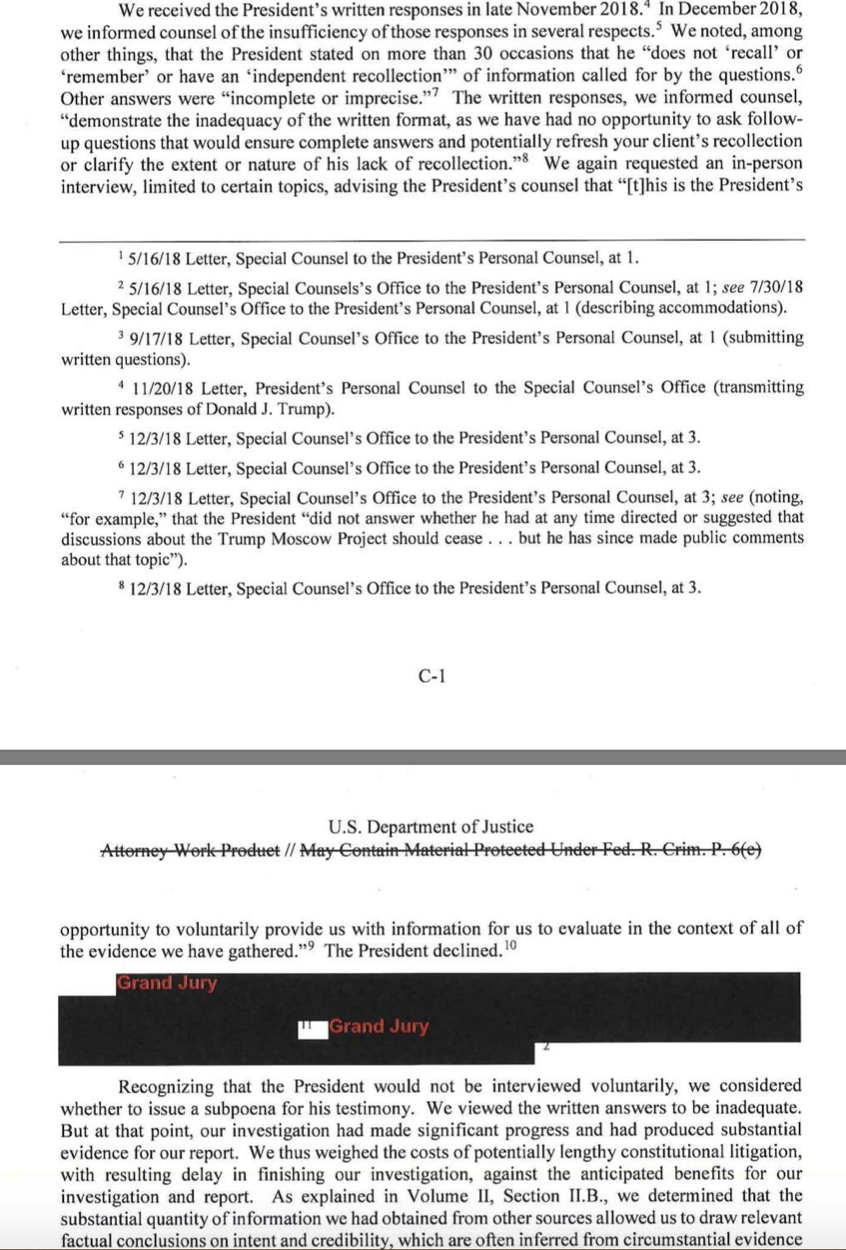 Both passages make clear that Mueller's team, after being stonewalled by Trump's lawyers, decided to take some action related to the grand jury.

That action, whatever it was, seems to have informed Mueller's conclusion that he had the "legal justification" to subpoena Trump, though he decided against it because, he writes, of the likely prospect of extended court and constitutional battles.

Mueller believed that the "substantial evidence" he had gathered — which included Trump's written responses — contributed enough to "the anticipated benefits for our investigation and report" that it rendered a drawn-out court fight unnecessary.

Even if Mueller had won that fight, Trump could likely have refused to testify further, either by invoking executive privilege or exercising his Fifth Amendment right against self-incrimination.

Furthermore, even if Trump had lied to Mueller in a sit-down interview — a blatant criminal act — the legal framework Mueller had adopted would not have allowed him to indict the president. The ultimate result, then, would have been unchanged: A report that Congress could use as basis for the impeachment process.

We have seen no reports that the grand jury took up questions about Trump's written responses, so what follows is highly speculative. But one intriguing sentence following one of the redacted grand jury passages reads: "Recognizing that the president would not be interviewed voluntarily, we considered whether to issue a subpoena for his testimony."

One explanation for that would be that at some point between receiving Trump's written answers and deciding not to subpoena him, Mueller submitted that testimony to the grand jury.

When Barr testified before the Senate the month after he published the report, Sen. Patrick Leahy, D-Vt., repeatedly asked the attorney general whether Trump had testified to the grand jury.

Given that the president had clearly not done so, Barr's reluctance to answer directly was puzzling.

Leahy: The president of course declared many times publicly in tweets and at campaign rallies and all that he would testify. He never did testify, correct?

Leahy: I think you know whether he testified or not.

Barr: As far as I know, he didn't testify.

Leahy: And Mr. Mueller found the written answers to be inadequate. Is that correct?

Barr: I think he wanted additional, but he never sought it.

Leahy: And the president never testified.

Barr: Well, he never — he never pushed it.

A few minutes later, Barr brought up the grand jury, which led Leahy to ask him again if it was accurate that Trump never testified.

Given the unusual circumstances, it's conceivable that one lawyer could understand written responses submitted to a grand jury as being grand jury testimony, while another might not. This could explain Barr's careful answer.

"I think Mueller may have presented the written answers to the grand jury," former U.S. attorney and national security expert Barbara McQuade told Salon in an email. "That could be considered 'testimony' before the grand jury, if they saw it."

Matt Miller, an MSNBC legal analyst and former director of the Office of Public Affairs for the Department of Justice under Barack Obama, understood the redacted material pertaining to the grand jury differently. "I think any discussion or decision whether to subpoena or not might be redacted," Miller said in an interview. "It appeared to be with Donald Trump Jr. That's what Ken Starr did with [former president Bill] Clinton."

But Barr did not in fact redact Mueller's discussion of his decision not to subpoena President Trump.

McQuade suggested that she regretted Mueller's decision to forgo a subpoena. "I think that pushing Trump to testify at a grand jury would have been successful, but would have taken a long time," she said. "As we have seen with other matters, Trump is willing to fight all the way to the Supreme Court. It could have taken a year to get it resolved. That said, it still might have been worth the wait."

The Department of Justice has until June 1 to submit its petition to fight the case in the Supreme Court. Barr appears determined to prevent Congress from reading the redacted grand jury material for as long as he can.