Like in the U.S., Malaysian authorities are using COVID-19 to limit immigration 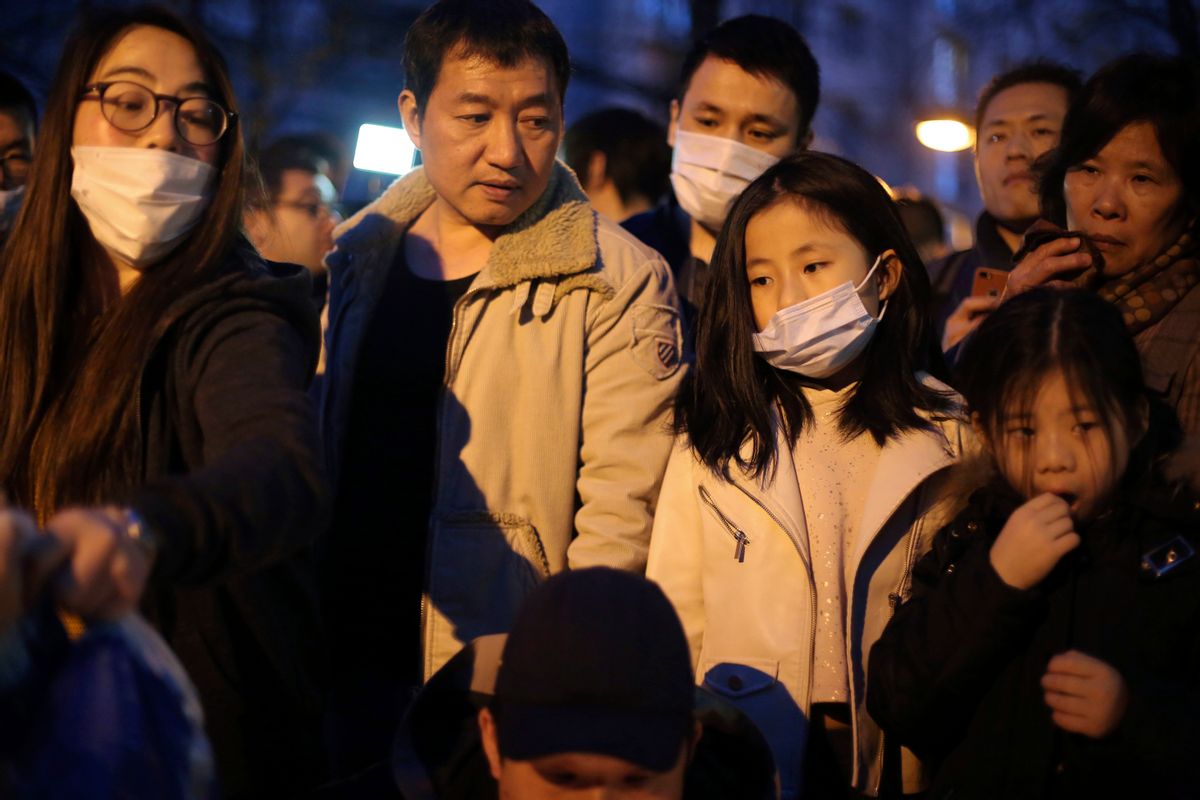 Chinese immigrants gather to protest over the fatal shooting of a Chinese man in his apartment, in Paris, Tuesday, March 28, 2017. Chinese immigrants and China's government are protesting a police killing in Paris that prompted violent street clashes and exposed the fears and frustrations of France's large Asian community. (AP Photo/Thibault Camus) (AP)
--

It's hard to fathom the type of desperation that would force scores of men, women and children to face the uncertainty of the open sea in little more than an overcrowded, pitifully rationed lifeboat — making starvation or dehydration seem almost inevitable, should they avoid the constant threat of drowning. Unfortunately for the Rohingya people — an ethnic and religious minority from Burma whose long history of oppression is unprecedented in terms of scale and brutality — this sort of desperation is all too familiar.

About 300 Rohingya refugees recently "rescued" in the Bay of Bengal may have felt like their string of horrid luck had finally turned. However, instead of being taken to their safe haven in Malaysia (likely their intended destination) where they might have finally had a chance at some semblance of a dignified existence, they were taken to the deserted, cyclone-prone island of Bhashan Char off the coast of Bangladesh. The group was part of a larger cohort which had been stranded at sea, possibly for months, in dilapidated fishing boats. It is feared that many have already died, and many more are still in danger.

Migrants fleeing violence, persecution and starvation have long been seen as a nuisance to state authorities forced to balance international ideals of human rights with domestic bigotry and isolationist tendencies. The COVID-19 pandemic has provided a convenient excuse for governments, including Malaysia, to refuse entry to migrants in an ostensible effort to limit spread of the virus. With no end in sight to the global disaster, this callous disregard for the world's most vulnerable could become the new norm.

For the Rohingya, their persecution at the hands of government-sponsored Buddhist nationalists culminated in 2017, when hundreds of thousands were violently forced from their homes in Burma in an effort at ethnic cleansing that was tantamount to genocide. Their settlement in nearby Cox's Bazar, Bangladesh, swelled to over a million people and has become one of the largest refugee camps in the world.

The Bangladeshi authorities immediately recognized the political inconvenience of housing the Rohingya refugees in an impoverished nation where the government has struggled to provide for the basic needs of its own citizens. In fact, plans to relocate the Rohingya, likely by force, to the precarious island of Bhashan Char, where the recently rescued migrants have been taken, have been in the works since the initial 2017 influx.

Malaysia's refusal to allow the boats to dock, condemning the migrants to remain at sea in constant danger, likely stems from more than a benign concern over the spread of COVID-19. Xenophobic distain for the Rohingya has been festering throughout the region, and any excuse for the Malaysian government to avoid the tribulations faced by the Bangladeshi authorities in their dealings with the refugees is likely a welcomed reprieve.

There are legitimate concerns over the spread of COVID-19 by any individual crossing borders, migrants included. But targeted testing and limited quarantine under humane conditions, as opposed to marooning individuals on an uninhabitable island, are simple solutions.

Aid groups and human rights advocates have recognized the dangerous precedent that Malaysia's audacious refusal might set in the COVID-19 era. In an open letter, the human rights organization Amnesty International voiced concern for the regional governments' disregard for the Rohingya migrants stranded at sea — which they explain amounts to a dereliction of humanitarian responsibility.

Similarly, the United Nations Children's Fund (UNICEF) released a statement reaffirming the UN Network on Migration's position that COVID-19 should not be seen as an excuse for states to engage in forced return of migrants.

The United States, a country that has often espoused lofty ideals of humanitarian values, has been shamefully silent with regard to the Rohingya being stranded at sea. Perhaps this is because the United States, far from living up to those espoused ideals, has used COVID-19 as justification to close its southern border with Mexico, blocking any asylum seekers or refugees from entering. Some 20,000 migrants who were already in the U.S. have been forcibly relocated to Mexico — a move that is anathema to the UNICEF statement or to any interpretation of human rights. Like the Malaysian authorities, the Trump administration has used COVID-19 as a means to obfuscate their pre-pandemic policy of limiting migration by any means necessary.

A global pandemic of this magnitude is sure to have a profound effect on our global society. With the public understandably scared and preoccupied by their own well-being, it has the potential to spur horrific human rights abuses. Or, if we so chose, it has the potential to remind us how small the world is and how we are all part of a global community. To remind us that whether it be the Bay of Bengal or the U.S.-Mexico border, "injustice anywhere is a threat to justice everywhere."