Long after a crisis recedes, residual anxiety can remain and become calcified in cultures, customs and institutions 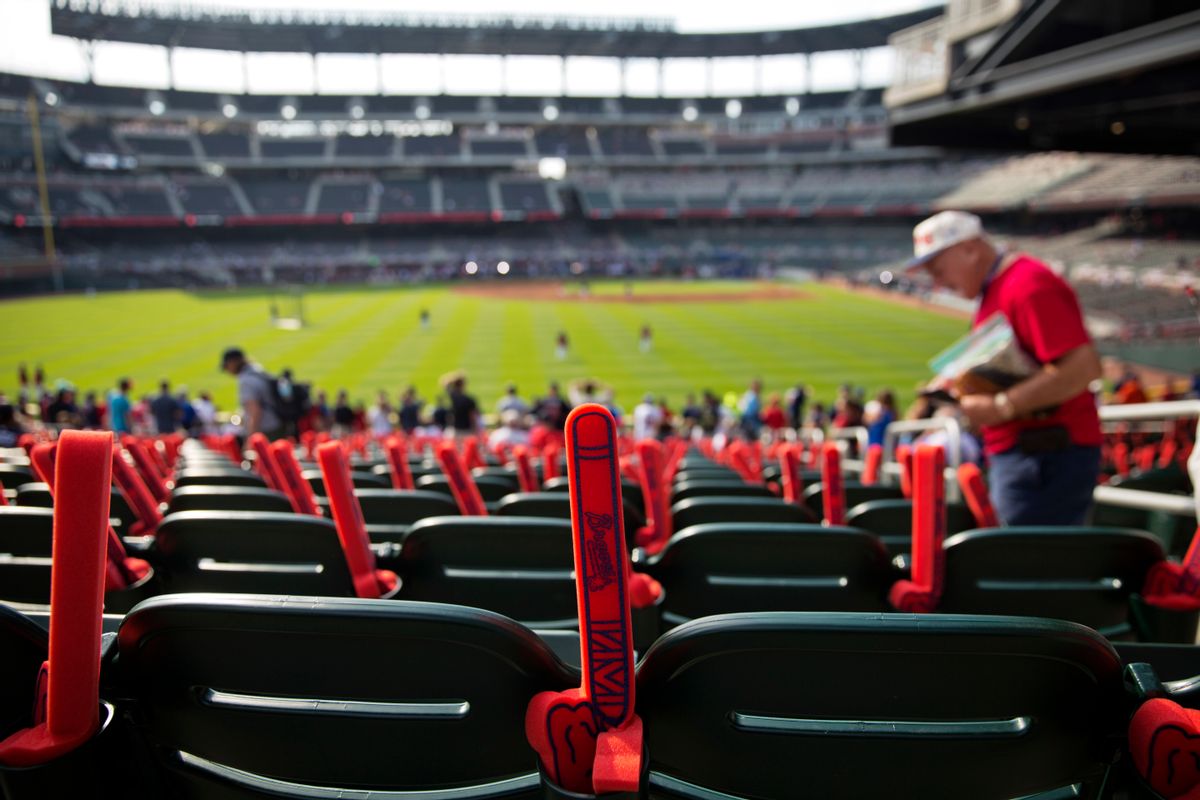 Foam tomahawks line the seats as spectators arrive for an opening day baseball game between the Atlanta Braves and the San Diego Padres in Atlanta, Friday, April 14, 2017. The Braves are playing their first regular-season game in SunTrust Park, the new suburban stadium that replaced Turner Field. (AP Photo/David Goldman) (AP)
--

Taiwan's pro baseball league rebooted operations in mid-April with robot spectators filling the bleachers. A month later, Major League Baseball dropped a 67-page document outlining a plan for bringing back the game. No hugs. No high-fives. No spitting. No showering. No fans. And lots of testing.

But the creative ways that leagues are trying to defibrillate their fanbases and keep money flowing in can't mask the fact that the sports industry is in a tailspin. Only about half of all sporting events that were originally scheduled for 2020 will likely take place.

And while play for some sports may resume in the foreseeable future, their long-term outlook remains unclear.

To what extent will residual concerns about COVID-19 shrink participation and fandom in the months to come? Will some moms and dads think twice before sending their sons and daughters off to soccer camp? When the gates finally open, how many fans will prefer watching from the safety of their couch?

As a social psychologist, I wonder if this might lead to a shift in the sports we watch and participate in, with high-contact sports taking a back seat to athletic activities more conducive to social distancing.

Fears can linger long after a crisis

Even under the best-case scenario — a vaccine emerging by early next year — many have been conditioned to worry about germs lingering on just about everything involved with the once-ordinary experiences of playing sports and going to live sporting events. Bathroom doors. Bleacher seats. Ketchup dispensers. Barbells. Locker-room air. People.

Concerns may persist even after coronavirus headlines fade.

I reached a similar conclusion after studying the fear of terrorism for more than a decade in the wake of 9/11. When people worry about something long enough, new institutions and cultural patterns form, making it easier and more likely for them to worry about the same thing in the future.

Before 9/11, 24% of Americans were very or somewhat worried about being harmed by terrorists; that percentage increased to 58% after 9/11. Over the next two decades, though the U.S. experienced relatively few deaths due to terrorism, the level of worry never receded to its pre-9/11 levels. In late 2019, the percentage of Americans who were very or somewhat worried about terrorism stood at 46%.

If the COVID-19 crisis persists or even surges again at a later date, it's easy to see how heightened concerns about disease spread could calcify into American culture, customs and institutions.

You don't need an arena or teams

But not all sports are the same; some can be played without constantly coming into close contact with others.

After years of decline, will participation rates in these sports and activities see a spike?

Many of them also depend on volunteers, grassroots groups, and public lands, parks and waterways, which may make them more resistant to the economic fallout from COVID-19 than heavily commercialized sports.

For instance, disc golf — a no-contact, individual, outdoor sport that involves throwing plastic discs into metal baskets from varying distances — is played predominately in public parks, and many of the courses have been funded, constructed and maintained by local enthusiasts. The sport's physical infrastructure is surely more recession proof than a high-end, unused, private sports facility.

And some disc golf businesses appear to be prospering, despite the pandemic.

On May 7, Jussi Meresmaa, CEO of Discmania, an international disc golf equipment company, told Ultiworld Disc Golf that they were "pretty much selling every disc on the shelf." Alan Barker, president of Infinite Discs, a large online disc golf equipment store, noted that online sales were at all-time highs.

Signs that the conversation is shifting

The sports industry isn't going to fall apart; it's not like the NBA will fold. But there is already some evidence of a shift.

In an academic paper published last year, I showed how the growth of small, emerging sports movements is reflected in traditional news coverage and social media use. A similar analysis reveals how the discussion of many sports has changed over the last four months.

Newspaper coverage of baseball increased uniformly in the first four months of 2019. As spring training got going in late February, America's pastime filled the sports pages of newspapers across the country. Press coverage of baseball typically doubles from January to April.

But with gates locked and fields empty in 2020, coverage of baseball dropped off. The number of articles about baseball in April 2020 — 64,338 — was roughly half the number published in April 2019.

I collected the same data for several other team sports and found roughly the same results. This isn't really a surprise; the NHL playoffs and NBA playoffs have been postponed, while college sports were canceled.

But this trend was not universal across all sports and recreational activities. Press coverage of disc golf in 2019 was like the coverage in 2020. In both years, as the weather got nicer in March and April, disc golf started cropping up more in the news. Despite the implementation of stay-at-home orders across the country, disc golf actually appeared in more articles April 2020 than in April 2019.

I found similar trends for other social-distance friendly sports and activities. Press coverage of running, biking, hiking, kayaking and fishing in April 2020 was higher or roughly equivalent to coverage in April 2019.

To me, this is a sign that athletic activities that can be performed at a distance — and outside — could be making a comeback. In fact, the number of articles mentioning "outdoors" was significantly greater in April 2020 — 31,361 — than in April 2019, which had 21,354 mentions.

Of course, a proper interpretation of these findings demands further research. Yet, it seems plausible that these preliminary findings could be a sign of what's to come.