How the pandemic is affecting home food waste

As people are cooking more than ever before, an expert offers tips on how to waste less food 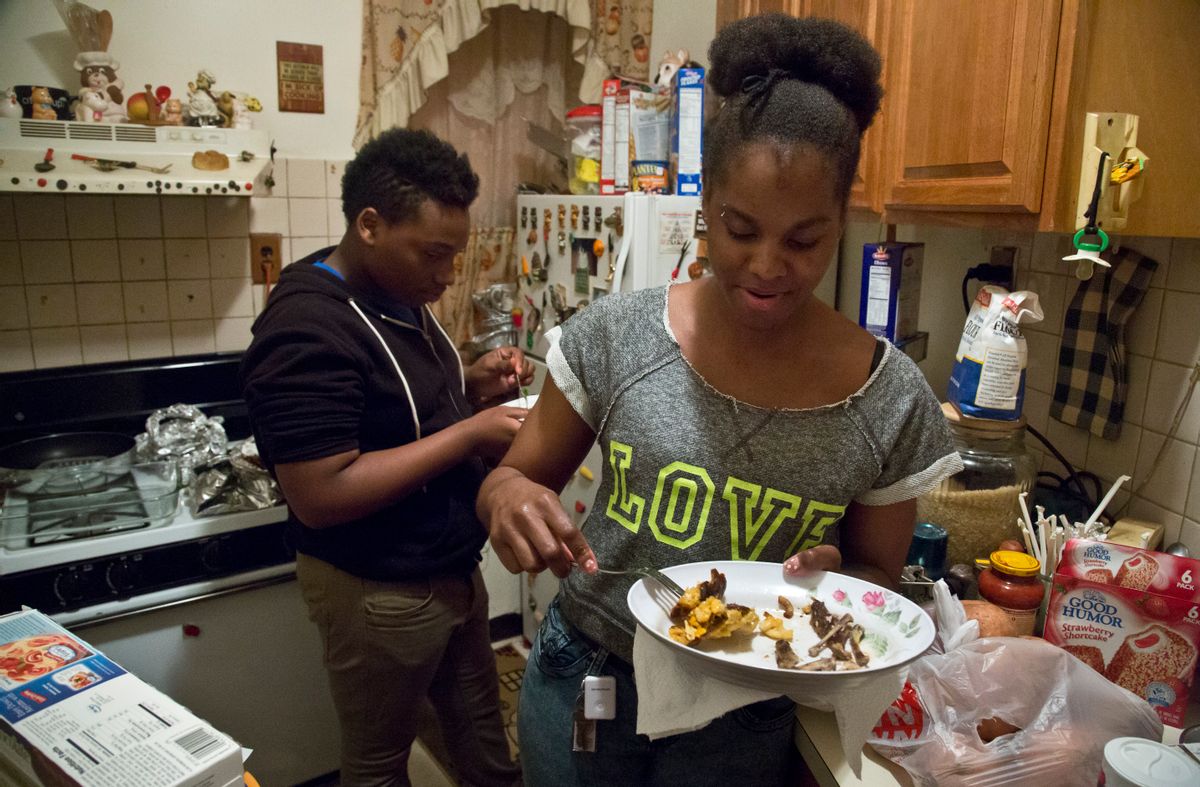 In this Friday, May 22, 2015 photo, Candie Hailey, right, and Timothy, her best friend's brother, eat leftovers while visiting her father's Bronx apartment in New York. For a while after her release from Rikers Island jail, where she spent 2 1/3 years in solitary during her more than three-year incarceration, her father's cooking was a welcomed treat until her struggle to recover from the trauma of confinement caused an estrangement. (AP Photo/Bebeto Matthews) (AP)
--

The silver pails are heavier than they were two months ago.

The cans sitting outside homes on a Tuesday morning in Ridgefield, Connecticut appear to be trash bins, but instead of rubbish, they're packed with food scraps. By the end of the morning, the scraps will be picked up by Curbside Compost, a company that serves parts of Fairfield and Westchester counties, in the metro New York City area.

"Households are filling their pails more because everyone is home," said Nick Skeadas, who co-founded the company in 2016.

As the coronavirus pandemic keeps people at home, many people who are cooking more than ever are also paying more attention to food waste. What they're doing about that food waste varies greatly.

While some home gardeners compost their own food scraps, most Americans don't have that option. And just 326 towns and cities (less than 2 percent of American communities) offer curbside food waste collection. New York City only began its voluntary organics pickup program in 2017, as part of the city's plan to reduce greenhouse gas emissions by 80 percent by 2050, and barely a year later halted expansion of the program.

Although the program, which is available to roughly 3.5 million New Yorkers remained in operation in March and April, the New York City Department of Sanitation recently announced it would suspend the service through May as the result of the pandemic.

But it's no secret that food waste was a huge issue long before the pandemic. Food waste is responsible for 6 percent of global greenhouse gas emissions. Now, images of farmers forced to dump milk, smash eggs, and destroy produce are all over the news. According to Politico, it took the U.S. Department of Agriculture (USDA) more than a month to begin buying large amounts of surplus produce. Yet, even before the pandemic, an estimated 33.4 percent of edible produce went unharvested in fields and disked under. Those numbers get worse off the farm. Households are believed to be responsible for the biggest portion of food waste. And it's not clear how things have changed now that more people are cooking at home.

Civil Eats spoke with food waste expert Dana Gunders, the executive director of ReFED, which just announced a grant program aimed at preventing 10 million pounds of food waste over the next 90 days, about the current state of food waste, what strategies home cooks can employ, and what's giving her hope for the future.

Are we wasting more food since the pandemic began? Less? Or are we just wasting it differently?

Overall, more food is going to waste than usual right now. With almost the entire restaurant and foodservice sector closed, entire supply chains have found themselves without a market. This is leading to millions of pounds of produce being tilled into the ground, many thousands of gallons of milk poured into lagoons, and huge amounts of seafood being thrown out. Because grocery sales are up, there is likely less food going to waste in that sector for the time being, but it's not enough to make up for all that's going to waste on the foodservice side. In homes, we don't know for sure, but my guess is that all the hoarding and change in habits has led people to waste slightly more food than normal.

What are the challenges of reducing food waste during the pandemic?

At first, the challenge was so many restaurants and campuses were closing abruptly, and they had to do something with all the food they had on hand. Now that has passed, and the main challenge is that supply chains that typically serve the foodservice channel have no market for their food. Some sales have been able to migrate over to the grocery sector, but that doesn't always work. For instance, a 20-pound bag of shredded cheese can't simply be sold in a grocery store, and people buy a lot less broccolini and high-end fish than restaurants do. So for many products, the sales just don't line up. There is a huge amount of food going to donation, but that doesn't always work out due to added costs of harvest or transport, or lack of storage by the donation partner.

What strategies do you recommend for those that want to reduce their food waste at home?

I usually give people four tips. First, plan your meals. Rotate through "meal sets" of two or three meals that utilize ingredients you tend to have in excess (e.g., cilantro or celery). Acknowledge that lazy nights of frozen pizza or takeout happen and plan them in. Include "Eat Down" nights, when you empty out the fridge to make use of anything that still needs using up. And remember, the moment you buy food, you've committed to it.

Freeze. Almost anything can be frozen—milk, cheese (best if shredded), bread (best if sliced), pasta sauce, pasta, leftovers, and more. At my home, we've been doing a lot of lasagna-type meals and getting sick of them after a day or two, so we just freeze the rest and are glad to have dinner already made a week later.

Store food properly. It buys you more time to use it. Fresh herbs and asparagus do great in a jar of water in the door of your fridge. Avocados last much longer if refrigerated once ripe. And fruit does best in a crisper drawer of its own set to "low" or slightly cracked open. You can find many more details on how to store different foods at savethefood.com.

Revive older food. Soak wilting veggies in ice water to re-crisp them. Un-stale bread, crackers, or tortilla chips by toasting them for 1-2 minutes.

What about "best by" and other label dates? How important are they?

Don't fear dates. Contrary to popular belief, "best by" and "sell by" dates are actually just manufacturer suggestions for when the food is at its peak quality—they don't indicate that the food is automatically bad on that date. Most food—including dairy—can safely be eaten after those dates. As a rule of thumb, foods that pregnant women are told to avoid are ones to be careful with, along with bagged salad greens.

Is now a good time to start a compost pile if you've never had one at home before?

Sure! Most of us don't have access to a municipal compost service, so home composting is the best option for recycling nutrients and reducing greenhouse gases with our food scraps. Make sure to read up on how to balance your pile with "brown" matter and how to turn it to get the best results.

People are learning or re-learning to cook, and that could be game-changing in reducing the amount of food that is wasted in homes in the long term. The more comfortable people are cooking, the more they're able to throw together a meal with what's in the fridge or know how to use something that's about to go bad. I also think many people are planning meals more as they're keen to shop less, which is another healthy muscle to build in terms of reducing waste.