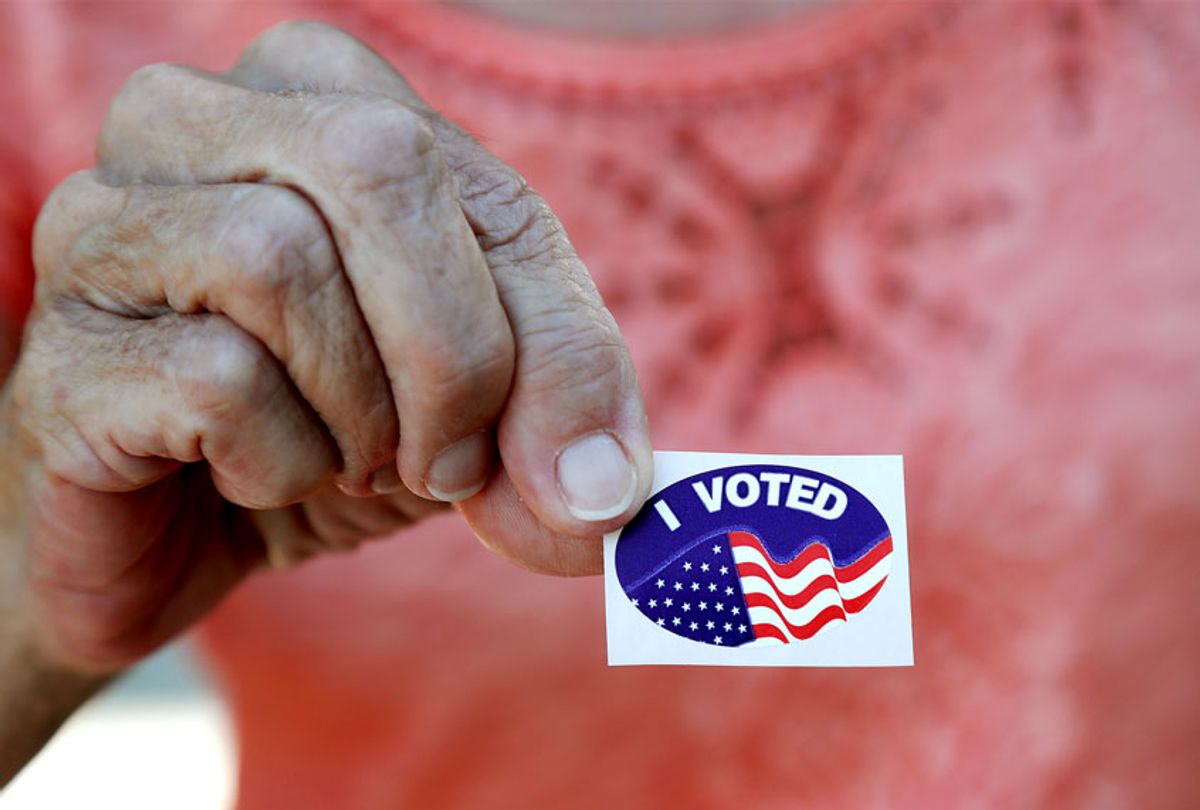 Woman shows her sticker after she voted in the Florida presidential primary in Cape Coral, Fla. (AP Photo/Elise Amendola)
--

Civil liberties advocates celebrated after a federal court on Sunday struck down as unconstitutional a Florida law that would have denied the right to vote to nearly a million recently enfranchised state residents with past felony convictions until they paid all outstanding legal fees, fines and restitution.

After Florida voters in November 2018 overwhelmingly backed Amendment 4 — a ballot initiative that restored the voting rights of Floridians who have fully completed their sentences for felony convictions other than murder or sex crimes — state lawmakers passed legislation that critics condemned as a "modern day poll tax."

U.S. District Court Judge Robert L. Hinkle of Tallahassee concluded Sunday that making voting rights contingent on payment for criminal justice services that a state must or chooses to provide represented "a tax by any other name" and violated the U.S. Constitution's 24th Amendment and the National Voter Registration Act.

Rights groups that challenged the Florida law — which was pushed through by Republican state lawmakers and signed by GOP Gov. Ron DeSantis in June 2019 — welcomed Hinkle's permanent injunction against SB7066 as "a watershed moment in election law" and "a powerful reminder that no one can trump the U.S. Constitution."

Leah C. Aden of the NAACP Legal Defense and Educational Fund called the ruling "a monumental win for our democracy" while Julie Ebenstein, senior staff attorney with ACLU's Voting Rights Project, said it was "a tremendous victory for voting rights" that could enable hundreds of thousands of Floridians to participate in upcoming elections.

Sean Morales-Doyle, senior counsel at the Brennan Center for Justice at New York University Law, said in a statement that this "historic win" in court "opens the way for hundreds of thousands of Floridians to exercise their fundamental right to vote this November — and our democracy will be stronger for their participation."

Although the state is expected to appeal Hinkle's decision — meaning participation in the upcoming November elections remains uncertain for many — the New York Times noted that "much of Sunday's ruling is built on a previous ruling by the United States Court of Appeals for the 11th Circuit in Atlanta, which would hear any appeal."

Critics of SB7066 vowed to keep up the legal battle as long as is necessary. The case was brought by the national ACLU, the ACLU of Florida, the Brennan Center, the NAACP Legal Defense and Educational Fund, the Campaign Legal Center, the Southern Poverty Law Center and the legal firm Paul, Weiss, Rifkind, Wharton & Garrison LLP.

ACLU of Florida legal director Daniel Tilley said that "our democracy requires that every eligible voter have equitable access to the ballot box. Instead of embracing this founding principle, the Florida Legislature and Gov. DeSantis enacted a modern-day poll tax to keep people from accessing this fundamental right."

"It should alarm Floridians that there are people occupying the highest echelons of political power in our state who fought to keep Florida tied to its racist past and bar people from voting," Tilley added. "While the state is likely to appeal this decision, we're ready to take this fight all the way to the U.S. Supreme Court."

Tilley and Aden acknowledged the bravery of their clients who participated in the case and spoke out against the law, which they denounced as discriminatory.

"While we're disappointed that the court did not recognize that the legislature's decision to adopt SB7066 was partially motivated by a desire to minimize the political power of black returning citizens, we nonetheless celebrate this important win alongside our brave clients like Raquel Wright, Curtis Bryant, Jr., LaToya Moreland and the Florida State and Orange County NAACP," said Aden. "Through their compelling testimony and dedicated engagement, they fearlessly stood up against Florida's attempt to put a price tag on voting."

"This court decision adds another remarkable chapter in our fight as returning citizens to participate in our democracy," said FRRC executive director Desmond Meade. "We will remain vigilant in our commitment to place people over politics, and ensure that all returning citizens, no matter how they may vote, have an opportunity to possess what we believe to be the most endearing sign of citizenship, the right to vote."

"As the leaders of Amendment 4," Meade added, "we are looking forward to utilizing this court ruling to expand on our registration efforts to create a more inclusive democracy, make voting exciting again, and to coalesce the voices of returning citizens to create a more just and equitable justice system."