“I can't breathe”: Video shows white cop with his knee on a black man’s neck who died in custody

"He should not have died": The FBI is now probing the arrest, which Mayor Jacob Frey calls "wrong on every level" 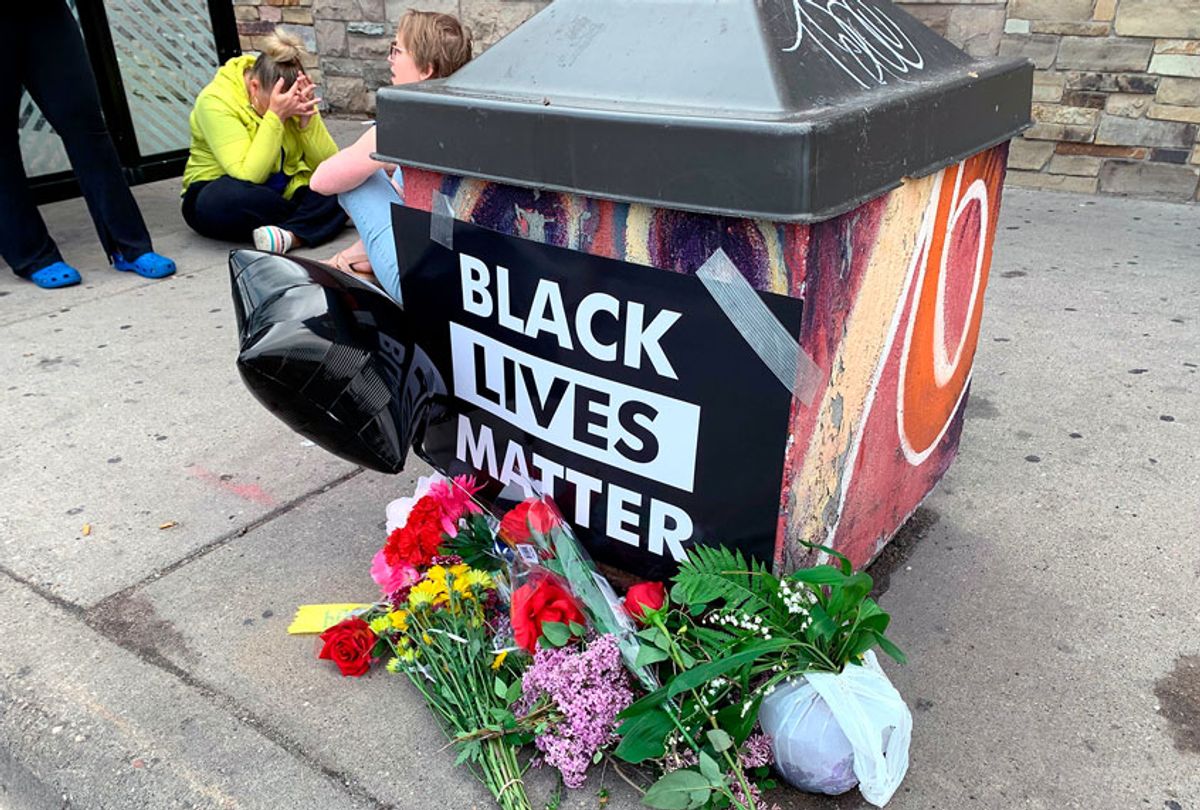 People gather around a makeshift memorial Tuesday, May 26, 2020, in Minneapolis, near where an black man was taken into police custody the day before who later died. (AP Photo/Jeff Baenen)
--

The FBI is investigating a witness video showing a white Minneapolis police officer with his knee on a restrained black man's neck before he died in custody.

A video posted to social media Tuesday shows the officer continue to keep his knee on the man's neck as repeatedly yells, "I can't breathe."

"Don't kill me," the man, whose identity has not been released, pleads in the video.

Bystanders also pleaded with the officer.

"You're going to just sit there with your knee on his neck?" one bystander is heard yelling in the video.

Minutes later, the man appears to lie motionless on the ground with his eyes closed.

"Bro, he's not even f*cking moving!" a bystander yelled. "Get off of his neck!"

"Did you kill him?" another bystander asked.

The Minneapolis Police Department issued a statement Monday revealing the unidentified man, who is believed to be in his 40s, died in custody.

The department said police responded to a report of a forgery in progress and found the man sitting unarmed in his car.

"After he got out, he physically resisted officers," the department said in the statement. "Officers were able to get the suspect into handcuffs and noted he appeared to be suffering medical distress. Officers called for an ambulance. He was transported to Hennepin County Medical Center by ambulance, where he died a short time later."

The department said that the Minnesota Bureau of Criminal Apprehension was investigating the incident. The FBI has also joined the investigation, the Minneapolis Star-Tribune reported.

Daniella Frazier, who recorded the encounter, said in a Facebook video that she did not see the beginning of the altercation.

"When I walked up, he was already on the ground," she said. "The cops — they was pinning him down by his neck, and he was crying. They wasn't trying to take him serious."

"The police killed him, bro, right in front of everybody," she said. "He was crying, telling them like, 'I can't breathe,' and everything. They killed this man."

Police spokesman John Elder said at a Monday news conference that the man had suffered a medical episode. He did not say if the man had any pre-existing conditions.

But Elder later said that "as we're looking a little further, we're realizing there's more to this."

"As we started digging into this and seeing more, we realized that the FBI needed to aid in this investigation," he said, according to the Star-Tribune. "We called and they readily agreed."

Elder added that the department does not authorize the technique the officer used to restrain the man.

"In my years as an officer, that would not be what I would ever consider a chokehold," he said.

The officers involved have been placed on administrative leave, according to the outlet.

Local activist Nekima Levy-Armstrong told the Star-Tribune that the video made her "sick to her stomach."

"It just reminds me of Eric Garner once again: a black man being accosted by police and pleading for his life saying he couldn't breathe," she said. "I'm fully convinced that if police wouldn't have been called to the scene, then he would still be alive."

Minneapolis police have their own history with in-custody deaths. In 2002, 44-year-old Christopher Burns died after two officers used a chokehold to restrain him. In 2008, 39-year-old Tommie Baker died choking on a bag of drugs after an officer repeatedly kneed him in the ribs. The same year, 24-year-old Quincy Smith died after he was Tasered and restrained by police. In 2010, 28-year-old David Smith, who suffered from bipolar disorder, died of asphyxiation after police Tasered and restrained him, leading to a $3 million settlement.

A protest is scheduled to take place Tuesday at the intersection where the man was restrained.

"Whatever the man may have done should not have ended in a death sentence," Levy-Armstrong said. "What started as an alleged economic incident once again turned deadly for a black man."

Minneapolis Mayor Jacob Frey said the arrest was "wrong on every level" during a Tuesday morning news conference.

Frey offered condolences to the man's family and the black community.

"He should not have died," he said.