"I'm not a racist": White woman apologizes after calling police on black birder in Central Park

"I'm not a racist," Amy Cooper says in a new interview. "I did not mean to harm that man in any way" 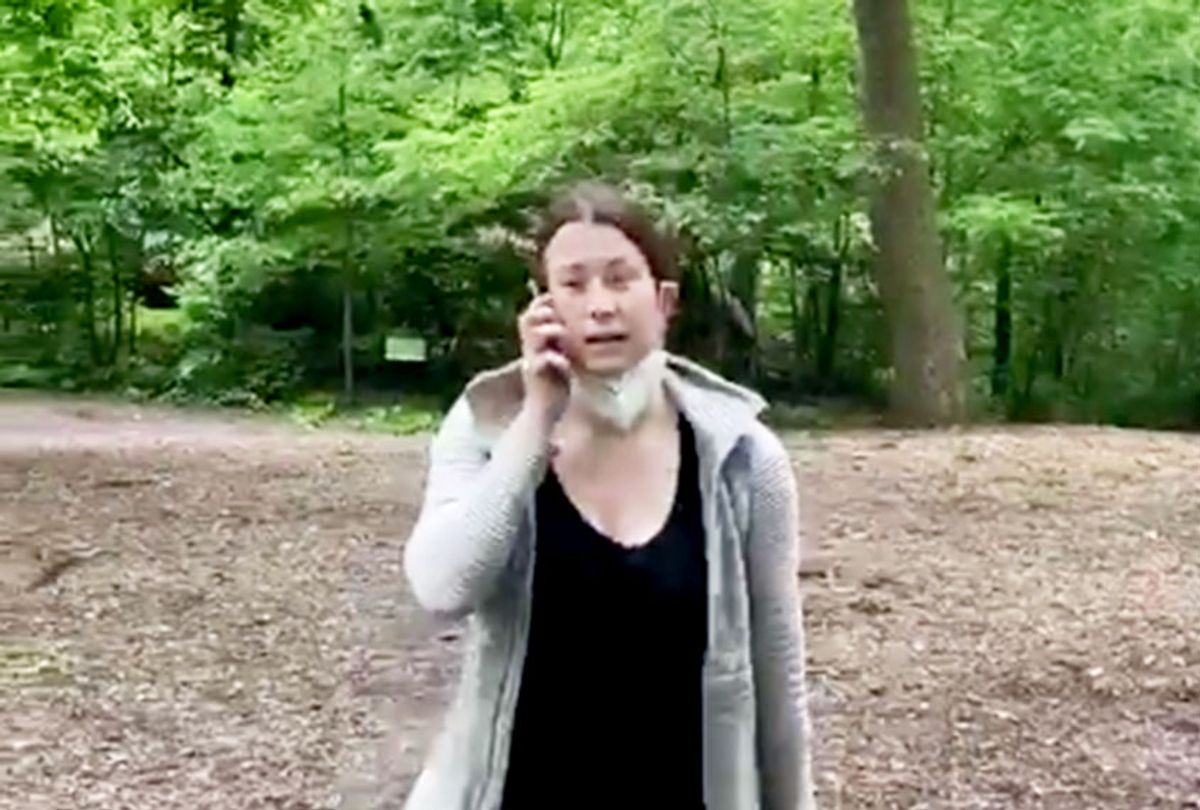 Video of Amy Cooper with her dog in Central Park was widely shared on social media on Monday. (Twitter/@melodyMcooper)
--

A white woman denied allegations of racism after she apologized for calling police on a black birder asked her to put her dog on a leash Monday morning in Central Park.

In an earlier interview with a local NBC affiliate, she said: "It was unacceptable, and I humbly and fully apologize to everyone who's seen that video, everyone that's been offended . . . everyone who thinks of me in a lower light. And I understand why they do."

The birdwatcher — Christian Cooper, a black man of no relation — recorded the encounter on his phone. After his sister posted video of the incident on Twitter, it was viewed more than 25 million times in 24 hours. Another chapter in an ongoing narrative of police being called on black Americans for "living while black" quickly became a cultural flashpoint.

"I videotaped it, because I thought it was important to document things," Christian Cooper told CNN, citing the murder of Ahmaud Arbery, a young black Georgia man shot to death while jogging. "This woman thought she could exploit that to her advantage, and I wasn't having it," he added.

Christian Cooper had been birdwatching early Monday morning in the Ramble, a bosky, secluded area in Central Park which draws hundreds of species of birds, when he encountered Amy Cooper and her dog. The white cocker spaniel mix was not on a leash, a violation of park rules posted on several conspicuous signs in the area — and one which the dog owner herself acknowledged.

"I didn't know what that meant," Amy Cooper later told CNN. "When you're alone in a wooded area, that's absolutely terrifying, right?"

Christian Cooper said he then pulled out dog treats. He told CNN that he keeps dog treats with him for exactly such an occasion. They excite dogs, forcing defiant owners to restrain them.

The video circulating online begins with Amy Cooper pulling her still-unleashed dog by the collar.

"Please don't come close to me," he says. "Sir, I'm asking you to stop recording me," she responds. When he refuses, she threatens to call the police.

"I'm taking a picture and calling the cops. I'm going to tell them there's an African American man threatening my life," she says, suggesting possible consequences.

She raises her phone to make the call. "There's a man — African-American — he has a bicycle helmet," she says. "He is recording me and threatening me and my dog."

The dog panics, and she tries to control it while speaking to the operator. "I'm being threatened by a man in the Ramble," she says. "Please send the cops immediately."

Eventually she leashes her dog. "Thank you," Christian Cooper says and stops recording.

By the time officers from the New York Police Department arrived, both of them had left.

"I think I was just scared," Amy Cooper said later. "When you're alone in the Ramble, you don't know what's happening. It's not excusable. It's not defensible."

Earlier in the month, Georgia law enforcement arrested a white former police officer and his son in the murder of Ahmaud Arbery, a 25-year-old black man who was killed while jogging through a tree-lined Brunswick neighborhood. The Department of Justice is reportedly investigating the killing of Ahmaud Arbery as a possible federal hate crime.

Gregory McMichael told police that he believed Arbery was a burglary suspect. The McMichaels were only charged in the murder after a video recorded by a neighbor which appears to show the shooting surfaced online. Both men were arrested days later, on May 9. The week before the Central Park incident, the man who recorded the video of Arbery's death was also arrested and charged with felony murder.

Presumptive Democratic presidential nominee and former Vice President Joe Biden said Arbery had been "lynched before our very eyes." President Donald Trump, who has trafficked for years in racism and race-baiting, including against the exonerated Central Park Five, called the footage "very, very disturbing."

Though the NYPD said the Central Park incident does not rise to a level that merits a police investigation, Amy Cooper told CNN that her "entire life is being destroyed."

The cocker spaniel rescue agency reclaimed her dog, and her employer — investment firm Franklin Templeton — put her on administrative leave pending an investigation.

"We take these matters very seriously, and we do not condone racism of any kind," the company said in a statement. "While we are in the process of investigating the situation, the employee involved has been put on administrative leave."

"There's no room for racism and bigotry in the park," Fischer told Salon in an interview. "We have to respond to it appropriately. Anywhere in this country, people who act like that need rehab and counseling, and if she's not willing to seek that help, she should never be allowed back."

The episode has also raised questions about increased public anxiety amid the coronavirus pandemic and related spikes in racist incidents.

"We all have to take a deep breath," Fischer told Salon.

"Everybody's going through the same thing," he continued. "No matter how challenging this is, we have to remember to treat everybody with dignity and respect. There's never an excuse."

Christian Cooper told CNN he would accept Amy Cooper's apology if it was "genuine."

"If she plans on keeping her dog on a leash in the Ramble going forward, then we have no issues with each other," he said.

"That's important to us birders, because we know that dogs won't be off leash at all, and we can go there to see the ground-dwelling birds," he said. "People spend a lot of money and time planting in those areas as well. Nothing grows in a dog run for a reason."