A secret Bureau of Prisons policy has kept all but 1.8% of federal inmates behind bars, where the virus rages. 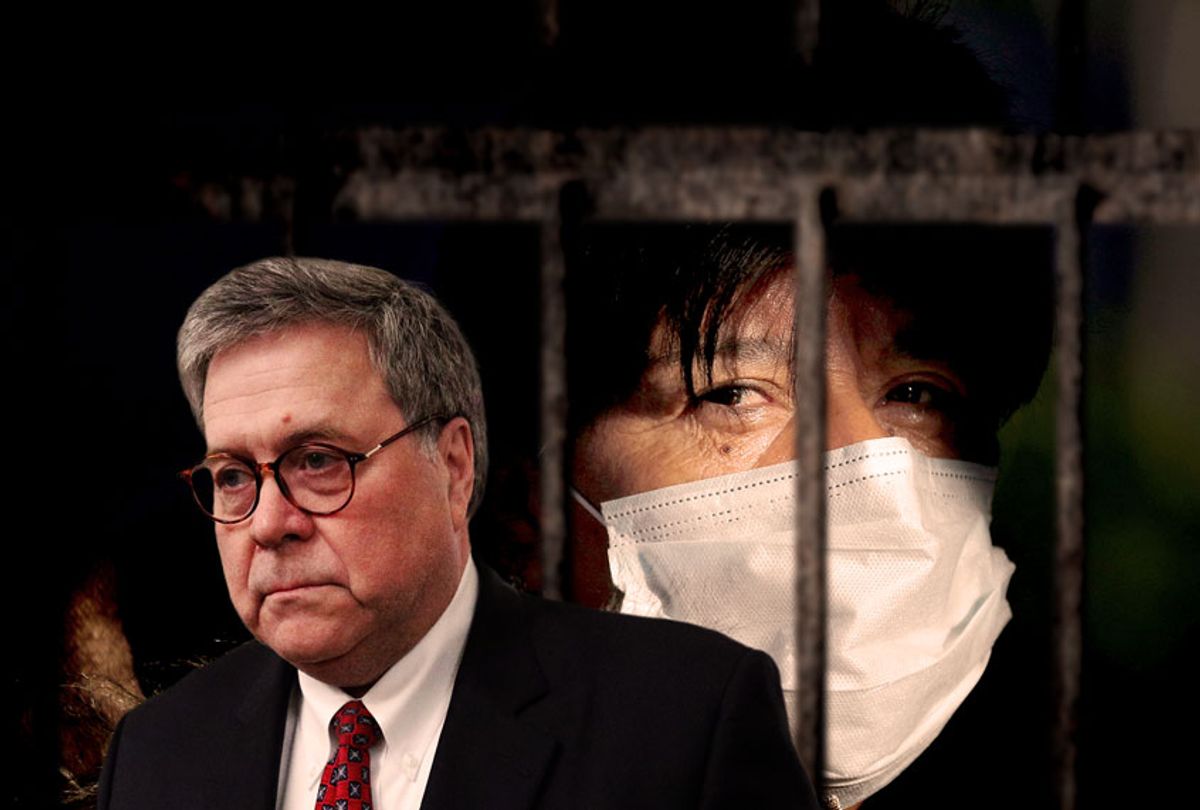 Even as the Justice Department announced that federal prisons would release vulnerable, nonviolent inmates to home confinement to avoid the spread of COVID-19, the agency was quietly adopting a policy that makes it harder for inmates to qualify for release, not easier. The result has been that more than 98% of inmates remain in federal custody, while a handful of celebrity inmates, like former Trump campaign chair Paul Manafort, have been released to home detention.

In two memos, one in late March and a second in early April, Attorney General William Barr directed the Federal Bureau of Prisons, which is part of the Justice Department, to begin identifying inmates who could safely be released to home confinement — essentially house arrest. They instructed prison officials to grant "priority treatment" to inmates deemed to present minimal risk to the public.

Separately, however, the Bureau of Prisons had drafted a 20-page policy document this year that altered a standard adopted only a year ago and made it harder for an inmate to qualify as minimum risk.

ProPublica obtained a copy of the document, which does not appear to have been finalized, and its existence surprised and baffled lawyers, prison reform advocates and inmates interviewed for this article. "It really tanks the whole enterprise if, once an instrument is selected, it can be strategically altered to make sure low-risk people don't get released," said Brandon Garrett, a law professor at Duke University who studies risk-assessment tools. "If you change the cut points, you've effectively changed the instrument."

The original assessment tool emerged from the First Step Act, a major criminal justice overhaul passed in 2018. Known as PATTERN, for Prisoner Assessment Tool Targeting Estimated Risk and Needs, it assigns a pair of numbers — based on factors like age, prison courses completed and history of violence — that purport to predict the likelihood an inmate will commit a violent crime, or any crime, upon release. Inmates are assigned to one of four categories for risk of recidivism: minimum, low, medium or high. In a July 2019 report, the Justice Department published a chart delineating the range of scores that fall into each category. The law requires that the methodology be released "publicly on the Department of Justice website."

Justin Long, a spokesman for the Bureau of Prisons, confirmed that the bureau had revised the risk categories without informing the public. The 2019 report was an "interim report," Long wrote in an email. "The interim report mentioned that DOJ would seek feedback and update the tool accordingly, which was done." That was news to people, like Garrett, who had provided feedback to the government on the rules.

The Justice Department, Long wrote, posted an update to its 2019 report in January "to reflect changes to the PATTERN tool." But that update says nothing about categorizing inmates more restrictively. To the contrary, the changes it describes largely respond to the comments of experts who raised concerns about racial bias and who sought greater transparency. As for the draft policy document, Long wrote, it "was not authorized for release."

The Bureau of Prisons' reliance on the unpublished policy document has exacerbated widespread puzzlement about how the agency is implementing Barr's home-confinement order. "There's been nothing but confusion," David Patton, the chief federal public defender for the New York City area, said. "We've received a steady stream of questions from clients about their scores, and we have no answers, because BOP doesn't give us any."

Fewer prisoners have been released than was expected when the attorney general made his announcement, lawyers say. About 3,050 inmates have been moved to home confinement as of May 21, Bureau of Prisons records show. That's around 1.8% of the people under the bureau's supervision. That figure is significantly smaller than the roughly 20% of inmates who fall into the minimum risk category (though it's not automatic that all of them would qualify for release) under the 2019 rules.

The slow pace of prisoner releases has begun to attract attention. On May 19, a federal judge accused officials at the Elkton Federal Correctional Institution in Ohio — the site of a deadly coronavirus outbreak cited by Barr in his order — of moving too slowly to release inmates and "thumbing their noses" at Barr's directive. He instructed them to expand the class of inmates eligible for home confinement by including inmates not only with minimum-risk scores, but also those said to have a low risk. The Justice Department has asked the Supreme Court to halt the order.

At the urging of Sens. Dick Durbin, D-Illinois, and Chuck Grassley, R-Iowa, who co-authored the First Step Act, the Justice Department's inspector general has agreed to examine the scope of Barr's directive as well as the Bureau of Prisons' compliance with it and the agency's overall response to the pandemic.

The process has been shrouded in mystery, as one inmate's experience shows. Blayne Davis, 38, who pleaded guilty to fraud for an investment scam, is an inmate at the Pollock Federal Correctional Complex's minimum-security prison camp, in central Louisiana. When he received his PATTERN scores in late April, they qualified him as minimum risk under the old scoring system. Davis expected to be eligible for home detention. Like many, he worried about exposure to the virus. At another federal prison just an hour to the south, several inmates had already died of COVID-19. The prison sometimes borrowed staff from Pollock.

Davis waited, in the beige-hued prison dorm where he lives, as officials called the names of inmates who had qualified for home confinement. The names kept coming, and Davis kept waiting, expecting to hear his name.

Then the names stopped. Perplexed, Davis asked prison staff why they hadn't called his name. His score, they told him, put him in the low category, not the minimum.

Davis persisted, pointing to the chart in the 2019 Justice Department report. Ultimately, a prison staffer handed him a piece of paper. It contained a chart that, like the one in the 2019 report, assigned a range of PATTERN scores to each category. But this one was far more restrictive. According to the 2019 report, a male inmate with a violent-recidivism score of 21 or lower fell into the minimum-risk category. Davis' score — a seven — put him firmly in that category. He wasn't violent or a troublemaker. He'd completed over 30 classes while incarcerated.

Now, he was informed, the standard had gotten tougher. For a male inmate to be deemed at minimum risk of committing a violent crime upon release from prison, he needed a score of not 21 or less, but six or less. Davis had missed the mark by a single point.

The new chart looked suspect to Davis, as if somebody had typed it up hastily. It wasn't on official letterhead, and there were a couple of glaring typos. The prison staff bristled when Davis pointed this out, according to his representatives, who later relayed his story and shared relevant documents. It was authentic, the staffers assured him. They had printed it off SallyPort, the Bureau of Prisons' intranet. Davis didn't know it at the time, but this new chart was drawn from the bureau's unpublished draft policy document.

An official at the Pollock prison camp declined to respond to ProPublica's questions, citing staff and inmate privacy. In an email, the official did, however, extend an invitation to visit the prison to interview inmates. Never mind the blaring red banner at the top of Pollock's website: "All visiting at this facility has been suspended until further notice." A formal request to interview Davis over the phone was met with silence.