Is veepstakes leader Stacey Abrams a progressive? Maybe in Georgia — but it's complicated

Abrams is a compelling figure who ran a strong race in Georgia. But she's clearly allied to the Democratic center 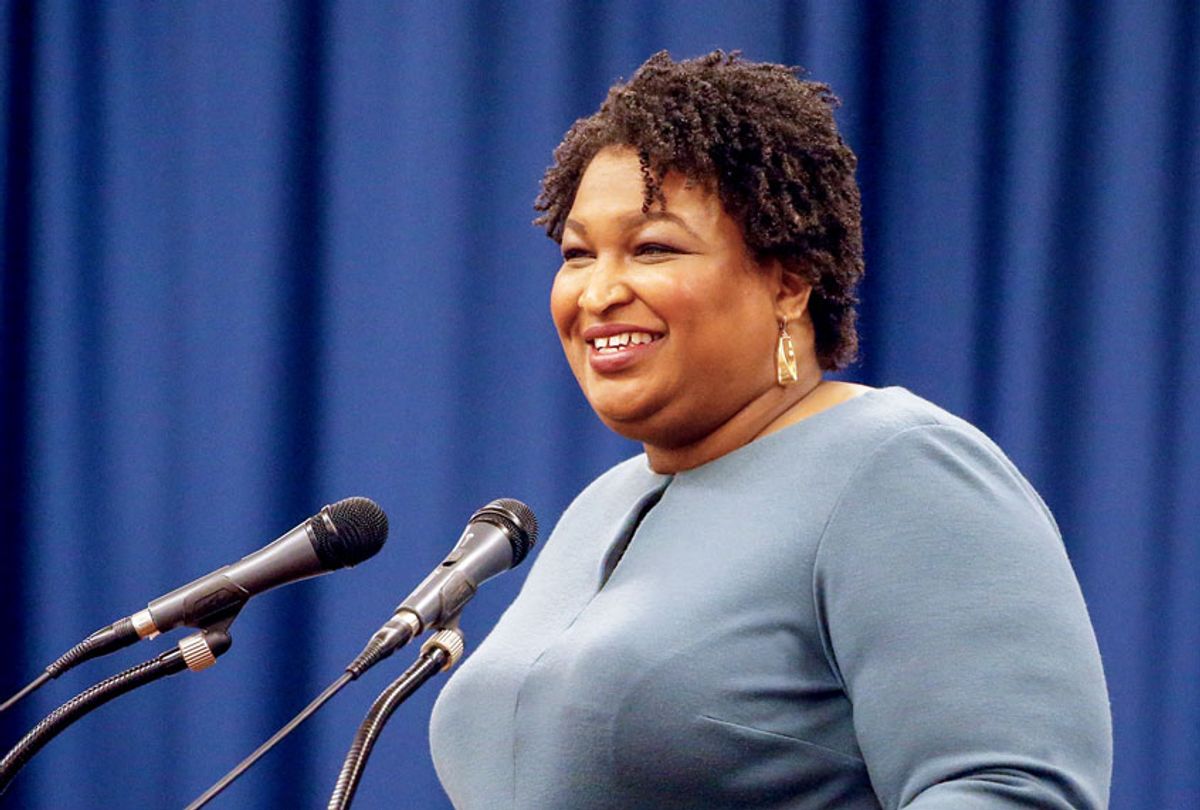 Stacey Abrams is being widely touted as Joe Biden's best pick for the vice-presidential nomination. She has been a rising star in the Democratic Party ever since her historic and groundbreaking run in the 2018 Georgia gubernatorial race. But while having a black woman on the ticket would be welcome, progressives need to understand that Abrams is firmly entrenched in the centrist establishment wing of the party.

Because Abrams ran an excellent race for governor in the Georgia context — fully deserving the widespread support she received from progressive organizations and individuals — it is easy to misunderstand her political approach as being more progressive than it is. In December 2018, weeks after losing the gubernatorial race (or, more accurately, having it stolen from her), Abrams stepped onto the national stage while signaling her embrace of the Democratic Party's corporate wing. She joined the board of directors at the Center for American Progress (CAP), which is second to none as a powerful political operation for the party's Clinton-aligned forces, fiercely hostile to the Bernie Sanders wing of the party.

For many years, no "think tank" in Washington has done more to wage political war on Sanders than CAP under the leadership of fervent Clinton loyalist Neera Tanden. So Abrams' public statement when she joined the CAP board is notable: "I am honored to be joining the board of the Center for American Progress. Led by the extraordinary Neera Tanden, CAP has been at the forefront of progressive policy development and activism for years. Together we will find and support bold solutions on health care, voting rights, the economy, and other critical issues our nation faces."

A little more than a year later, in early 2020, Abrams doubled down on throwing her lot in with the corporate wing of the party when she joined the board of a major big-money organization, Priorities USA.

The first African-American woman to be the gubernatorial nominee of a major party, Abrams came to national prominence as a result of her grassroots campaign against Georgia's then-Secretary of State Brian Kemp, a Republican. He refused to recuse himself from running his own election and worked assiduously to purge more than 1.4 million voters from the rolls between 2012 and 2018. Abrams, leading the New Georgia Project, drew 800,000 more Democratic voters to cast ballots in 2018 than in the 2014 midterms. Despite poll site closings, nonfunctional voting machines and other voter suppression factors, Abrams "lost" the election by only 55,000 votes.

Abrams ran on a platform that was progressive — for Georgia. She supported Medicaid expansion, universal background checks, universal pre-K, criminal justice reform and the introduction of automatic voter registration. She also supported pay equity and expanded sick leave. She won union support by backing the right to form a union and to collectively bargain for fair wages and safe workplace conditions. Those positions, coupled with her massive grassroots get-out-the-vote campaign, excited everyone from Oprah Winfrey (who went door-to-door for her) to progressive activists like the Bernie Sanders-inspired group Our Revolution. Indeed, Sanders himself formally endorsed Abrams.

From a national perspective however, those were mainstream Democratic Party positions, with limits on how progressive her platform was. She supported a $15-per-hour minimum wage for major cities like Atlanta, but not for the state as a whole, arguing that such an increase would destabilize many of the state's local economies. She did not advocate for single-payer health care.

Overall, Abrams argues for the supremacy of identity over class politics. "I'm not going to do class warfare; I want to be wealthy," she has said. A longtime member of the elite Council on Foreign Relations, she laid out her views on identity versus class politics in a 2018 article in the Council's Foreign Affairs magazine. In that article she argued that minorities and the marginalized have little choice but to fight against the particular methods of discrimination employed against them. And she rejected politics based on "the catchall category known as 'the working class,'" citing the long history of conflict between black and white laborers in the U.S.

During a presentation titled "A Conversation with Stacey Abrams" at a May 2019 Conference on Diversity in International Affairs sponsored by CFR, Abrams said that "income inequality is a danger because of what it signals to our economy," and the solution is to take aggressive steps to "ensure that more people can make more money." But, she added: "I disagree sometimes with the notion that if we just reduce the top then that's enough, because if we reduce the top but we don't increase the bottom and we don't strengthen the middle, then we're going to be in the same place again."

"And so," Abrams said, "I do believe that we have a framework for addressing income inequality. Now let's be clear, I'm less concerned about what the richest person [makes] than I am about making sure other people have the opportunity to have that too. And as long as we're focusing on pulling down as opposed to pulling up, then we're having the wrong conversation because when you're only focused on the pulling down, people can argue that that's just classism." (This resonates with Joe Biden's comments to the Brookings Institution in 2018 — "I don't think 500 billionaires are the reason we're in trouble. The folks at the top aren't bad guys" — and his assurance to donors last year that "nothing would fundamentally change" under his presidency.)

The Center for American Progress is a behemoth in Democratic Party circles, along with its sister organization the CAP Action Fund that shares its staff. (The fund, a 501(c)4, is permitted to do more explicit lobbying and electoral work.) CAP's $60 million budget comes primarily from philanthropic sources such as the Foundation to Promote Open Society, the Sandler Foundation, Carnegie Corporation of New York, Walton Family Foundation and the Ford Foundation. CAP claims that less than 3 percent of its budget comes from corporations. These have included Amazon.com, Facebook, Google, Microsoft, Bank of America, Wells Fargo, Comcast NBC Universal, CVS Health, Lyft, Uber Technologies, Verizon and Walmart.

Although CAP bills itself as an "independent nonpartisan policy institute dedicated to improving the lives of all Americans," in reality it is a hotbed of operations for the Democratic Party's corporate wing. CAP research has shaped the party's centrist policy positions for more than a decade, with fierce allegiance to the Clinton wing. As such, it actively opposed the presidential candidacy of Bernie Sanders in both the 2016 and 2020 primary campaigns.

CAP's founder in 2003 was John Podesta, who had served as Bill Clinton's White House chief of staff; he went on to be a senior counselor to Barack Obama and campaign adviser to Hillary Clinton during the 2016 primary. Tanden, CAP's president since 2011, has advised Obama and both Clintons. She was a policy adviser to Bill Clinton and later worked as Hillary Clinton's policy director during the 2008 primary battle with Obama. Describing herself as a Hillary Clinton "loyal soldier," Tanden acknowledged that she was an informal adviser to the 2016 Clinton campaign and privately gave the campaign political advice.

One of the key differences between the establishment and progressive wings of the Democratic Party is disagreement over the role big money should play in electoral politics. Abrams' comfort level with big money playing an outsized role in electoral politics was evident in her support of Michael Bloomberg's short-lived entry into the 2020 Democratic primaries. While failing to publicly note Bloomberg's record of imposing anti-Muslim, anti-black unconstitutional policing tactics during his three terms as mayor of New York, Abrams defended Bloomberg's apparent attempt to buy the Democratic presidential nomination.

Appearing on ABC's "The View" in mid-February, Abrams said of Bloomberg: "Every person is allowed to run and should run the race that they think they should run, and Mike Bloomberg has chosen to use his finances. Other people are using their dog, their charisma, their whatever." She added that she thought the question of Bloomberg's immense wealth was "an appropriate question to raise. But I don't think it is disqualifying for anyone to invest in fixing America." When asked whether Bloomberg's $5 million contribution to her political action committee Fair Fight Action had any influence on her position, Abrams responded: "I am grateful to any person who contributes to Fair Fight. We have more than 100,000 contributors — his check just had a few more zeroes on it."

When commenting on Bloomberg's entry into the Democratic primaries, Abrams quipped that "for once we know where the money is coming from." Priorities USA is affiliated with the Democratic Super PAC Priorities USA Action. Priorities USA is a lavishly funded nonprofit 501(c)(4) organization and is an embodiment of not knowing where the money is coming from, since it relies on unlimited anonymous contributions. Joining this group's board puts Abrams in touch with some of the Democratic Party's biggest donors. When coupled with her board membership at CAP, it appears she has major access to the party's establishment power structure.

This is in keeping with Abrams' political ambitions. She has made no secret of her interest in becoming the nominee for vice president this year. She recently told Elle magazine: "I would be an excellent running mate. I have the capacity to attract voters by motivating typically ignored communities. I have a strong history of executive and management experience in the private, public, and nonprofit sectors. I've spent 25 years in independent study of foreign policy. I am ready to help advance an agenda of restoring America's place in the world. If I am selected, I am prepared and excited to serve."

Abrams has also suggested that she intends to run for president down the political road. When the time comes, given her approach to political positioning and campaign fundraising, there is scant reason to believe she would opt for the kind of progressive, small-donor models embodied in the 2020 campaigns of Bernie Sanders and Elizabeth Warren. While she likes to describe herself as a progressive and as a pragmatist, Stacey Abrams is now on a national path that looks far more "pragmatic" than progressive.

Deborah Toler is a researcher at RootsAction.org. She was previously a program director at Oxfam America and a senior research analyst at the Institute for Food and Development Policy (Food First).