Why white silence is deafening — and deadly 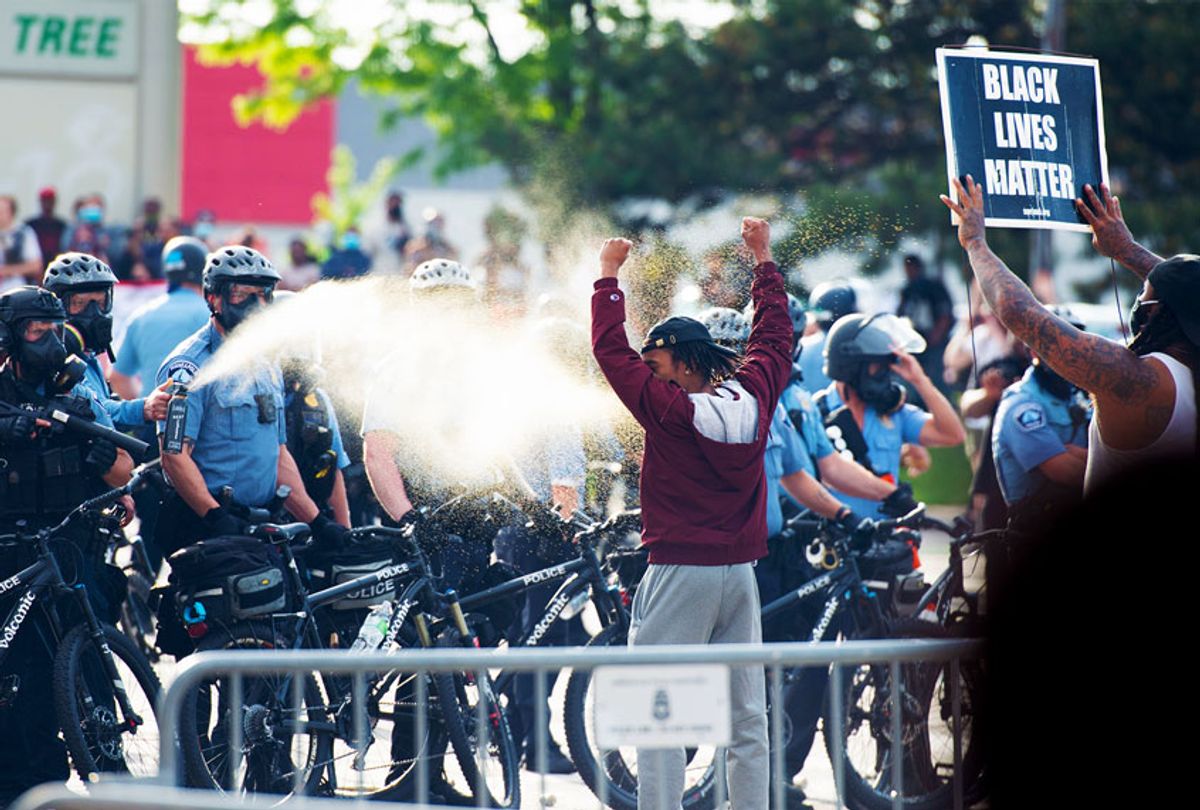 Minneapolis police pepper spray a protestor on Wednesday, May 27, 2020, during the second day of protests over the death of George Floyd in Minneapolis. (Steel Brooks/Anadolu Agency via Getty Images)
--

Once again, a video was released: George Floyd. For eight minutes, life was squeezed out of him. We saw him beg for water, for his breath, for his life. We saw the indifference with which his pleas were met. The video depicted Derek Chauvin, a now-fired Minneapolis police officer charged with murder, kneeling on Mr. Floyd's neck as he lost consciousness. It is enraging and horrifying, yet common.

Most white people I know believe that black lives matter. They will tell you they voted for Obama twice. They cannot stand Donald Trump. They are enraged by police brutality. These are the white people I want to speak to: Your anger and sadness about the big things are meaningless if you choose to do nothing about the small things you have control over.

Words matter. Express your outrage. It makes me feel supported. If you don't know what to say, say so. Share something that someone else has written that you agree with. For the sake of black lives, don't be silent. White silence is deafening. I might assume you care, but I will also assume you do not care enough to resist publicly. Perhaps you worry about your colleagues or friends who might think differently, a family member who is a police officer, or others on social media who might "attack" you. Put your concerns in perspective. George Floyd, Breonna Taylor, Ahmaud Arbery, among many others, were attacked and lost their lives because of the silence of good white people.

Actions matter. Don't just talk, act. Check out the actions that white people have already compiled for their peers. What I want to do here is draw your attention to similarities between three very mundane actions of white people that perpetuate modern-day lynching without requiring a knee on the neck, a chokehold, or a loaded gun. These types of everyday actions of white people make it difficult for my community to breathe.

1. The failure to humanize black people.

Intellectually, you may know we are people. Practically, we aren't full people to you; people with names, joys and worries, families and friends. You see us only when you fetishize or tokenize us, need to build your "woke" credentials or because you perceive us as a threat. You do not think of us as people. In my graduate school years, I was often referred to as "the black girl in Carrie's cohort," or "the black girl in Gilbert's cohort."

I know these people will not murder a black man, but how they see us is a manifestation of white supremacy. It is the same inability to truly humanize black people that we see play out in violence against us.

2. The automatic presumption of guilt.

You are black, therefore you cheated, you stole, you are lying. A community collaborator has been overwhelmed distributing everything from food to diapers during this pandemic. He forgot that he had cashed an institutional check, so he emailed to inquire. Instead of emailing him back directly with a copy of the cashed check to remind him or alert him in case someone else cashed the check, I, as his supervisor, received an email that was essentially reporting his behavior as suspicious.

Black people are not given the benefit of doubt. The sender of that email would not have shot Ahmaud Arbery, but the same mentality led to his death. Presumed a thief.

3. The assumption that white people are inherently better.

Sometimes in colleges, when a black professor is finally hired, they wait another five, 10 or 20 years to hire another. They tell themselves it not their fault that most "qualified" applicants are white, while creating targeted positions to hire white scholars they know. These exceptions then lead to an even whiter campus and foster the lie that white people are better. Special exceptional treatment because you are white is exactly why it took so long for Gregory and Travis McMichael to be arrested and charged with the murder of Ahmaud Arbery.

In the end, actions speak louder than words. Small symbolic actions matter. Stand up for justice and equity in small things, then we will know you truly have our backs when we are shot while sleeping, eating ice cream, playing video games, jogging, or suffocated by a knee on our necks.