"America is not a battleground," retired Gen. Martin Dempsey says. "Our fellow citizens are not the enemy" 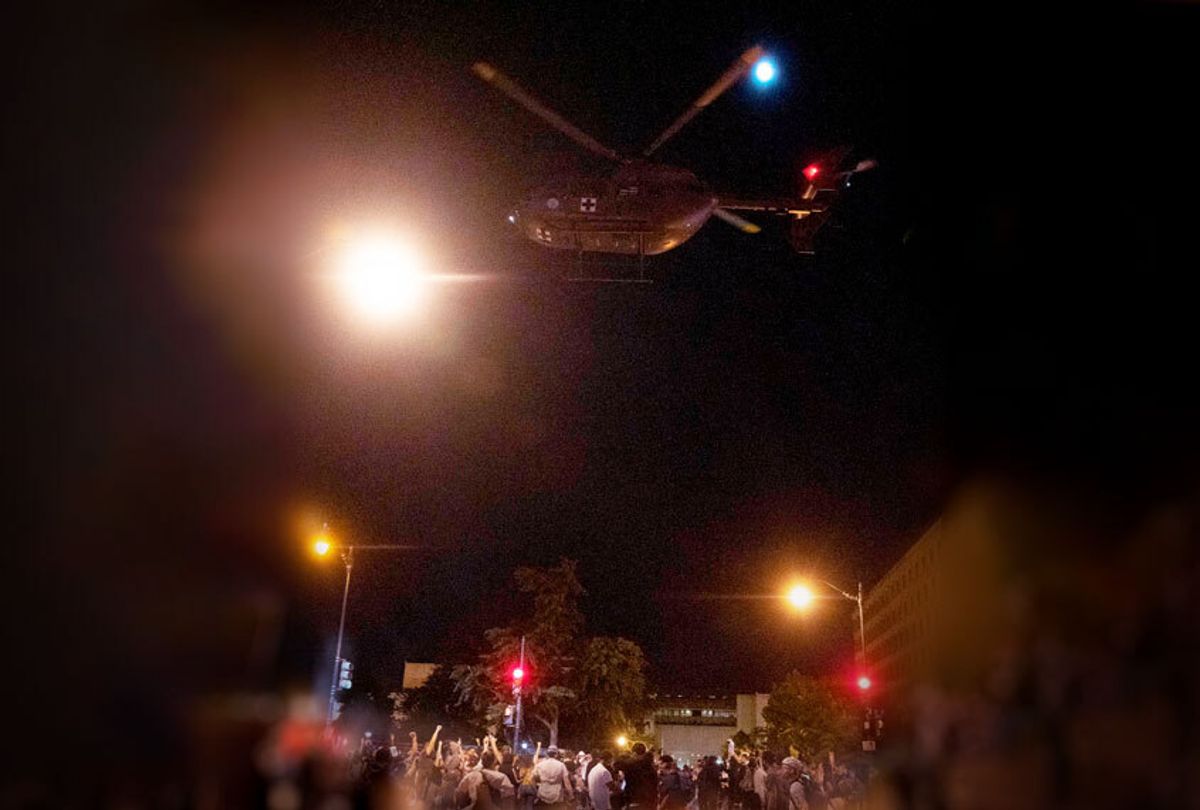 A military helicopter flies low pushing a strong vertical down wash of air (rotor wash) onto the crowd during a protest over the death of George Floyd on June 1, 2020. (Getty Images/ROBERTO SCHMIDT/AFP)
--

An Army helicopter on Monday descended near Washington rooftops in a counterinsurgency maneuver intended to disperse protesters after the city's curfew went into effect.

President Donald Trump on Monday ordered hundreds of active-duty soldiers from Fort Bragg in North Carolina to the nation's capital to quell protests that have raged near the White House. After its exterior lighting went dark over the weekend, the president hunkered down in an underground bunker.

Trump also threatened to send the military into states. Though he has the power to deploy the military into Washington's streets, Trump would have to get permission from governors — or invoke the Insurrection Act, an 1807 law aimed at rebellions — in order to send troops elsewhere.

Police backed by the National Guard unleashed tear gas, rubber bullets and flash-bang shells on peaceful protesters prior to the city's 7 p.m. curfew on Monday to clear the way for President Donald Trump to walk from the White House to historic St. John's Episcopal Church, where he had his photo taken holding a Bible. After the curfew, Gen. Mark Milley, the chairman of the joints chief of staff, patrolled Washington streets to monitor the military deployment.

At several points, a military helicopter was seen descending extremely low, knocking out branches and windows and scattering debris, in an apparent effort to "scare away" the protesters.

"As scores of protesters made their way into Washington D.C.'s Chinatown district, a Blackhawk helicopter with U.S. Army markings descended to rooftop level, kicking up dirt, debris, and snapping trees that narrowly missed several people," The New York Times reported. "The maneuver, often conducted by low flying jets in combat zones to scare away insurgents, is known as a show of force."

The aircraft used the maneuver several times during the evening.

The display of force came after Trump issued a threat to governors, who he lambasted as "weak" over their response to the protests over the death of George Floyd.

"Today, I have strongly recommended to every governor to deploy the National Guard in sufficient numbers that we dominate the streets," he said Monday. "If a city or state refuses to take the actions that are necessary to defend the life and property of their residents, then I will deploy the United States military and quickly solve the problem for them."

The Washington Post reported that the administration has already discussed invoking the Insurrection Act. Defense Secretary Mark Esper echoed Trump's call to "dominate" the protesters during Monday's call with governors.

"The 'battle space' of America???" retired Army Gen. Tony Thomas, the former head of U.S. Special Operations Command, tweeted. "Not what America needs to hear . . . ever, unless we are invaded by an adversary or experience a constitutional failure . . . ie a Civil War."

"America is not a battleground," retired Gen. Martin Dempsey, the former chairman of the Joint Chiefs of Staff under President Obama, added. "Our fellow citizens are not the enemy."

New York Attorney General Letitia James vowed that she would fight any attempt by Trump to send in the military.

"President Trump is not a dictator & he doesn't have the right to unilaterally deploy U.S. military across American states," she said. "We will guard the right to peaceful protest & will not hesitate to go to court to protect our constitutional rights during this time & well into the future."

"You are reckless if you deploy our active duty military against Americans," Rep. Ted Lieu, D-Calif., an Air Force veteran, said. "Are Apache helicopters going to fire rubber bullets? Are machine guns going to fire blanks? You will increase the chances of dead Americans. We need you to de-escalate, not escalate."

"The President of the United States tear-gassed peaceful protestors in order to clear the way for a useless photo-op outside the White House—just after vowing to activate the military against our own people," Sen. Elizabeth Warren, D-Mass., a former presidential candidate who has been mentioned as a potential running mate to presumptive nominee Joe Biden, added. "Lives and our democracy are in danger."

"The U.S. military fights America's enemies. The American people are not the enemy," Rep. Val Demings, D-Fla., another contender to be Biden's running mate, said. "Anyone who believes differently is not fit to lead us."

"The military exists to protect Americans, not harm them," Rep. Ruben Gallego, D-Ariz. Gallego, a Marine veteran, said. Gallego published a terse letter he sent to Milley, asking: "Do you intend to obey illegal orders from the President?"