After casting doubt on Russian interference, Barr is “worried” that foreign actors might print counterfeit ballots 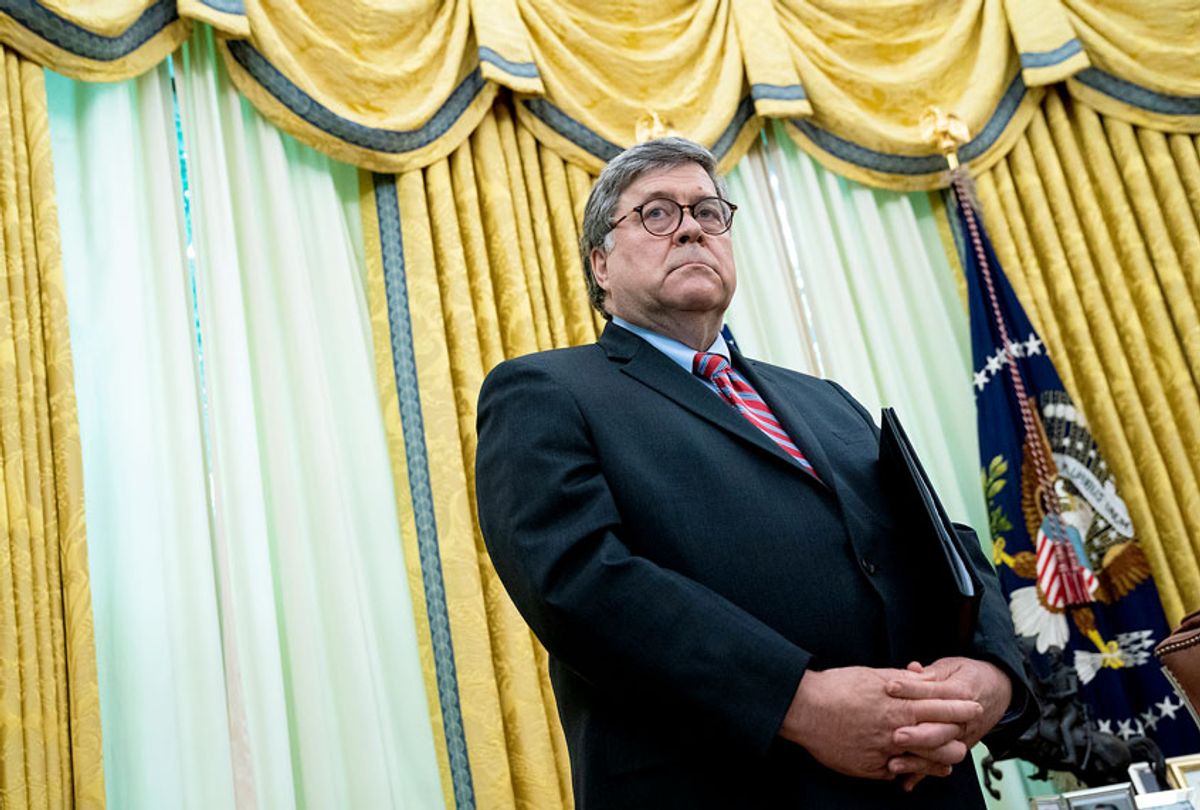 "I haven't looked into that" theory, Barr told The New York Times, but without citing any evidence said it was "one of the issues that I'm real worried about."

"We've been talking about how, in terms of foreign influence, there are a number of foreign countries that could easily make counterfeit ballots, put names on them, send them in," Barr said. "And it'd be very hard to sort out what's happening."

"Bill Barr is a liar. Our nation's chief law enforcement officer is trying to burn down American democracy to prop up a corrupt impeached executive," he tweeted. "Barr's debasement of our justice system and his assaults on American democracy have been so relentless I've been calling for his impeachment and the revocation of his law licenses since last year."

"Bless Bill Barr's heart — this just couldn't happen," said Michael Li, senior counsel for the Brennan Center of Justice Democracy Program at NYU School of Law. "In most states, your signature on the mail-ballot envelope is compared to the signature on file before a ballot is counted… And the reality is that the states that will be potentially decisive in 2020 all already allow no-excuse vote by mail."

"It's hard to see Barr's comments as something other than laying the groundwork for casting doubt about the election after November," Li added. "That's why it's important that we all push back."

Though most states already allow anyone to vote by mail for any reason, Trump has fomented baseless conspiracy theories alleging that mail voting is rife with fraud. There is no data to suggest that there ever has been any significant fraud related to mail voting, or in-person voting either, for that matter. That hasn't stopped Trump from blatantly lying and inventing hypothetical crimes, drawing a rare fact-check from Twitter. Last week, the president suggested that children might "raid the mailboxes" to steal ballots.

"Which is happening — they grab the ballots," Trump said. "You don't think that happens?"

No. It doesn't happen.

"What we know can be boiled down to this: Voting fraud in the United States is rare, less rare is fraud using mail ballots," Charles Stewart, en elections expert at the Massachusetts Institute of Technology, told The New York Times.

"Election fraud in the United States is very rare, but the most common type of such fraud in the United States involves absentee ballots," agreed Rick Hasen, an elections expert at the University of California, Irvine. "Sensible rules for handling of absentee ballots make sense, not only to minimize the risk of ballot tampering but to ensure that voters cast valid ballots."

"You can't just print out a single ballot for the entire U.S. No two localities have the same ballot because local offices appearing on it are different," he explained. "What if you want to target a single precinct, since district lines cut [across] cities and counties? You'd need to hijack a ballot and be able to mass print the ballot and two return envelopes (the return envelope and the inner privacy envelope)."

"It is easy for election officials to detect ham-handed attempts like making ballot copies," McDonald added. "All the while, the post office, which works with election officials to process ballots, will have to be oblivious to fake ballots moving through their system. If someone dumps a bunch at a single location, that will be suspicious. Certainly if they are [coming from] overseas addresses."

Despite the Trump administration's attempts to cast doubt on the legitimacy of mail voting, White House press secretary Kayleigh McEnany, White House adviser Kellyanne Conway and Trump himself have all voted by mail. Trump has yet to point to a single example of widespread voter fraud, but has publicly complained that he thinks Republicans are likely to lose if voting is expanded.

"This all comes from fear by Trump and like Republicans that more people voting means more non-white voters," Stuart Stevens, a Republican consultant who worked on Mitt Romney and George W. Bush's presidential campaigns, told HuffPost.

These attacks from the administration could backfire. Pennsylvania, for example, has seen more than twice as many requests for absentee ballots from Democrats than Republicans.

"I must tell you that locally, in my county, we're not advocating and we're not pushing the mail-in voting," Lee Snover, the chair of the Northampton County Republican Party, told the Philadelphia Inquirer. "We're concerned about fraud. We're not happy with the process. Trump has sent the message out there that he's concerned about it as well."

The county is one of three in the state that flipped from Obama to Trump in 2016.

"Our county kind of is a Trump county. We're kind of listening to Trump on this. He's spoken about it. He's tweeted about it. He doesn't want us to do it," Snover said, adding that "more than one person" has told her that "Trump doesn't want us mailing in, [so] I'm not mailing it in."