Protests around the world: This time it’s different

Enough already — from London to Los Angeles, people of all races are fed up 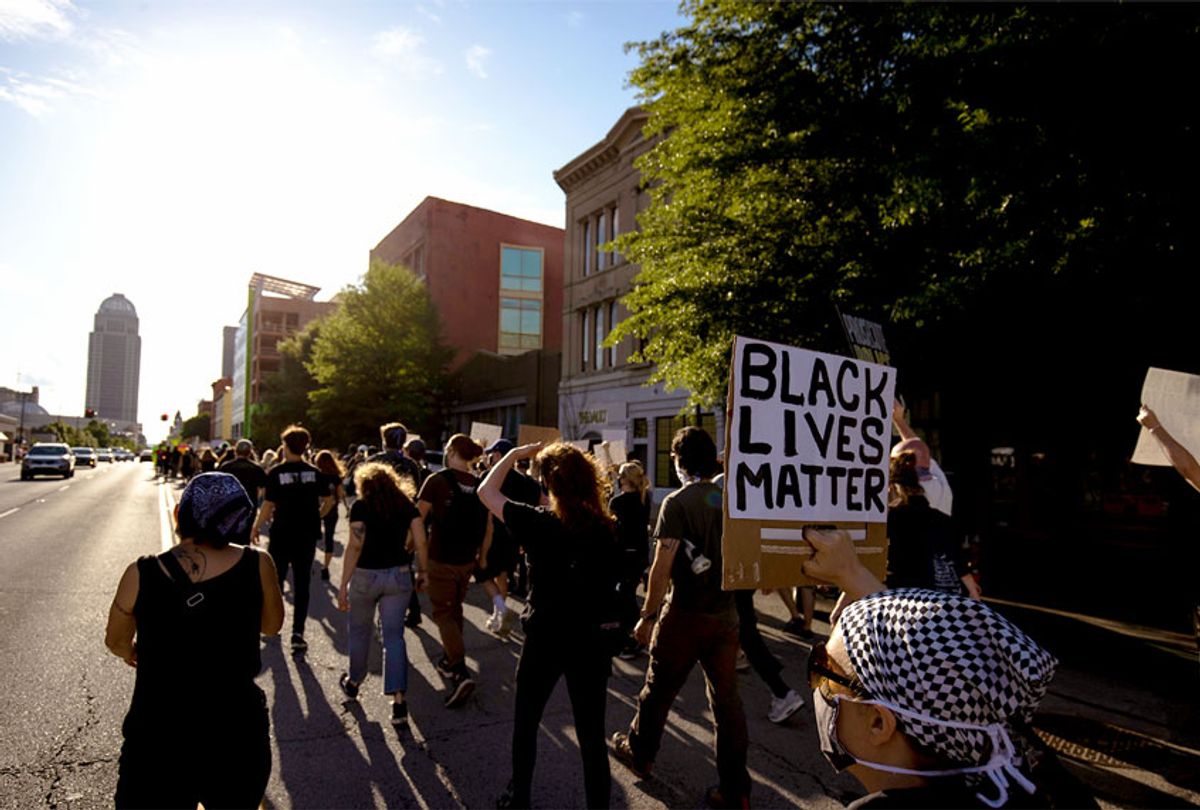 Protesters march peacefully through streets towards city hall on May 29, 2020 in Louisville, Kentucky. Protests have erupted after recent police-related incidents resulting in the deaths of African-Americans Breonna Taylor in Louisville and George Floyd in Minneapolis, Minnesota. (Brett Carlsen/Getty Images)
--

A profound, historical difference separates the current protests across America from previous eruptions of anger over police violence against blacks. It's a difference that isn't showing up in news reports, even though it's quite apparent.

The differences: Where demonstrations are taking place and who is protesting.

Historically we've seen white people burn black neighborhoods or black Americans demonstrate in their own neighborhoods. The latter occurred with the 1965 Watts riot in Los Angeles and in the 1992 riots after the acquittal of white Los Angeles police officers in the Rodney King beating.

This was black and white together, along with Latino and Asian and elderly and disabled. These protests transcend class and income. And they show that cellphone videos have awakened— woke — many white Americans with irrefutable evidence of everyday police abuse of blacks.

As Gandhi taught, there is something in the human heart, in our biological makeup, that is offended by immoral brutality and oppression. But as he also taught people have to be informed to be offended.

America's long history of denial about racial oppression by the police and other instruments of state power simply cannot withstand the power of the digital witness we all carry in our pockets.

In Los Angeles, cable news channels and local television focused on demonstrators gathering in places like Beverly Hills and the city's prosperous  mostly white West Side. There also were demonstrations in the seaside town of Santa Monica, in Long Beach and other predominantly white coastal towns.

In New York City, there were demonstrations in the South Bronx, home to the poorest Congressional district in America. There, 95% of residents are black or Latino.

But what was revealing were the demonstrations in the prosperous Union Square area in Manhattan, part of the second richest Congressional district in America.

In Chicago, demonstrators in the impoverished Armour Square neighborhood on the South Side demanded an end to police violence against people of color.

So did people of many colors in the rich neighborhoods just north of the Loop near the Magnificent Mile.

This pattern of protesting in central business districts and prosperous commercial areas surrounded by mostly white populations holds true in Philadelphia, Seattle and many other cities.

The other focus of demonstrations has been government buildings, symbols of the official oppression of black Americans since the invention of racism four centuries ago to justify New World slavery.

The demonstrators also are remarkable in this time of coronavirus for wearing facemasks as they exercise their First Amendment rights of speech, assemble and petition for a redress of grievances.

Ruhel Islam, an immigrant whose Minneapolis restaurant burned during the protests, declared his solidarity with those protesting the lynching of George Floyd.

Where I live, and in other cities, volunteers on Sunday cleaned up broken glass, helped merchants take inventory and otherwise showed compassion.

But we also saw much police misconduct captured on camera, which should remind us how deeply police violence is rooted in blue uniform culture. I exposed such four decades ago when I critically examined the Los Angeles Police Department for three years.

This time, however, some of the brazen police brutality was corrected by other officers. We may start seeing many more cops speak up instead of quietly going along to get along.

In New York, when a white cop gratuitously slammed a white woman demonstrator to the sidewalk, shaky cell phone video captured a black cop pursuing and upbraiding the wrongdoer.

In Salt Lake City, a white cop pushed an elderly man with a cane into a barrier and onto the pavement. Almost instantly another officer reached out to help the man stand up, assisted by the perpetrator. The incident was captured on cell phone.

Protesters and police together took a knee in Minneapolis, Oakland and other cities, a symbol of peaceful civility and solidarity.

We also saw protesters in New York negotiate with police to open a line so people could peacefully pass.

The short history of taking a knee reminds us of the silent protests by Colin Kaepernick when he was the San Francisco 49ers quarterback. He bent his knee rather than stand during the national anthem to protest police violence against African Americans.

Some other black and a few white athletes followed. Trump went into a Twitter rage. He even spent $325,000 of our tax dollars in 2018 to send Vice President Mike Pence to make a show of walking out of a football game where players took a knee to protest police violence.

Perhaps these protests will end the blacklisting of Kaepernick by the National Football League team owners.

They might break solidarity with Trump in trying to deny racial oppression and dictating how the oppressed may protest, where and when. Prior to coronavirus, the football audience was shrinking at an accelerating rate, driven in part by this racist conduct of team owners.

The fury Trump felt at the original bent knee turned to fear as huge crowds gathered outside the White House over the weekend. The president's house was built with slave labor, staffed for decades by slaves and was home to many racist administrations. It's naturally a symbol to many of racial oppression, especially with a racist living there now.

Huge fires were set nearby 1600 Pennsylvania Ave. for two nights.

Trump fired off aggressive tweets threatening to unleash "vicious dogs" and mayhem on protesters. That only encouraged more demonstrators to turn out Sunday to denounce his loutish, racist behavior.

Sunday night, Trump took refuge in an underground bunker even though the White House has bullet-proof windows and is the most securely guarded location in America. Like all bullies, draft-dodging Trump is cowardly to the core.

When Trump comes out of hiding, he will sit in the Oval Office beneath a painting of Andrew Jackson, the slave-owning and murderous seventh president. That's not a subtle reminder of what he really thinks about black Americans and Native Americans.

In Salt Lake City, demonstrators focused on the Utah Capitol where police, as in Washington, often acted with discipline and restraint when television klieg lights illuminated their faces.

In Rochester, demonstrators marched Saturday from an urban park named for the American champion of nonviolence, Martin Luther King Jr., to a symbol of how racism infects America, the local law enforcement complex with its jail, police headquarters and criminal courts.

Thousands of Canadians, Germans, Britons and others gathered at American embassies and consulates to shame America for claiming equal justice for all. They know Trump, who spews racist rhetoric and who was determined in judicial proceedings to have discriminated against blacks, Asians, Puerto Ricans and women, leads the federal government.

Who was responsible for the late-night violence? Authorities suspect white supremacists set many of the fires and instigated looting in Minneapolis, St. Paul, Seattle, Salt Lake City, Rochester and other cities.

It makes perfect sense that the hateful racists who Trump calls "fine people" would infiltrate peaceful mixed-race crowds. They wanted to foment arson and other violence to further their evil goal, hoping to stick minorities with the blame.

This time instead of vague police and city hall claims that "outside agitators" made trouble we are seeing police forces actually investigate. Among the earliest findings: Of the more than 100 people arrested in the Twin Cities only 21 came from Minneapolis or St. Paul.

In Rochester, cell phone video helped police identify a known white supremacist suspected in the burning of seven cars and a trailer near the local jail. Police are hunting for him.

The evidence shows racists failed miserably in trying to start a race war.

They will continue to fail because these demonstrations make clear that America has reached a point where the racists can no longer wield state violence as they wish.

Yes, cops lobbed tear gas and fired rubber bullets, some shot at people sitting porches, and attacked at least 100 journalists. Bad as that is, we no longer live in the America of 1921. White mobs murdered hundreds of African Americans in Tulsathen. In the "Bloody Sunday" march in 1965, Alabama police attacked peaceful marchers on the Edmund Pettus Bridge near Selma.

We've crossed a metaphorical bridge this past week. The only remaining question is how many more bridges must be crossed to arrive in the land of decency and justice for all.

These factors and more suggest that at long last America has acquired shame.

That at long last America has had enough of official violence against people of color.

That racist cops who publicly brutalize people will escape justice less often and perhaps no more.

The demonstrations were not pristine examples of protest and civil disobedience. The window-breaking and looting that we all saw on television were wrong and criminal. But compared with the lives lost over 400 years by out-of-control slave catchers and police, looting is wrong, but small beer. And, of course, ending police oppression of people of color could end our too frequent spasms of fury over police brutality and, therefore, of such looting.

An end of fearing police?

Every black American I know, whether working-class or multimillionaire, lives in fear of encountering a cop whose blind hatred may end their life or that of someone they love. That includes black cops.

Now the day when police crime goes unpunished may be coming to an end thanks to cell phone videos. All of America sees the brutal truth that black Americans – and cops of all colors – have always known.

The thick blue line that for decades has protected overly aggressive, frequently brutal and openly racist cops in every big city and rural hamlet is thinning as more people of color and women join police forces.

Maybe, just maybe, that blue line will begin dissolving as more police officers feel empowered to speak up about calculated acts of brutality.

Let us not just hope so. Let's act. Let's tell our elected officials we won't tolerate this anymore.

Let's demand the repeal of laws that in some states like New York make police abuse complaint files secret.

Let's get Congress and state legislatures to enact laws to narrow the broad immunity that they and prosecutors enjoy so they face serious consequences for misconduct.

Let's elect lawmakers and a president who will work to achieve that laudable and long-delayed goal of equal justice for all.

And let's quickly vote out those who are just talk and no action.

Doing so will make for an America that is better in every way for every one of us.