Responding to protests, green groups reckon with their own racist past

For the past few decades, groups have been working to overcome the racist history of the environmental movement 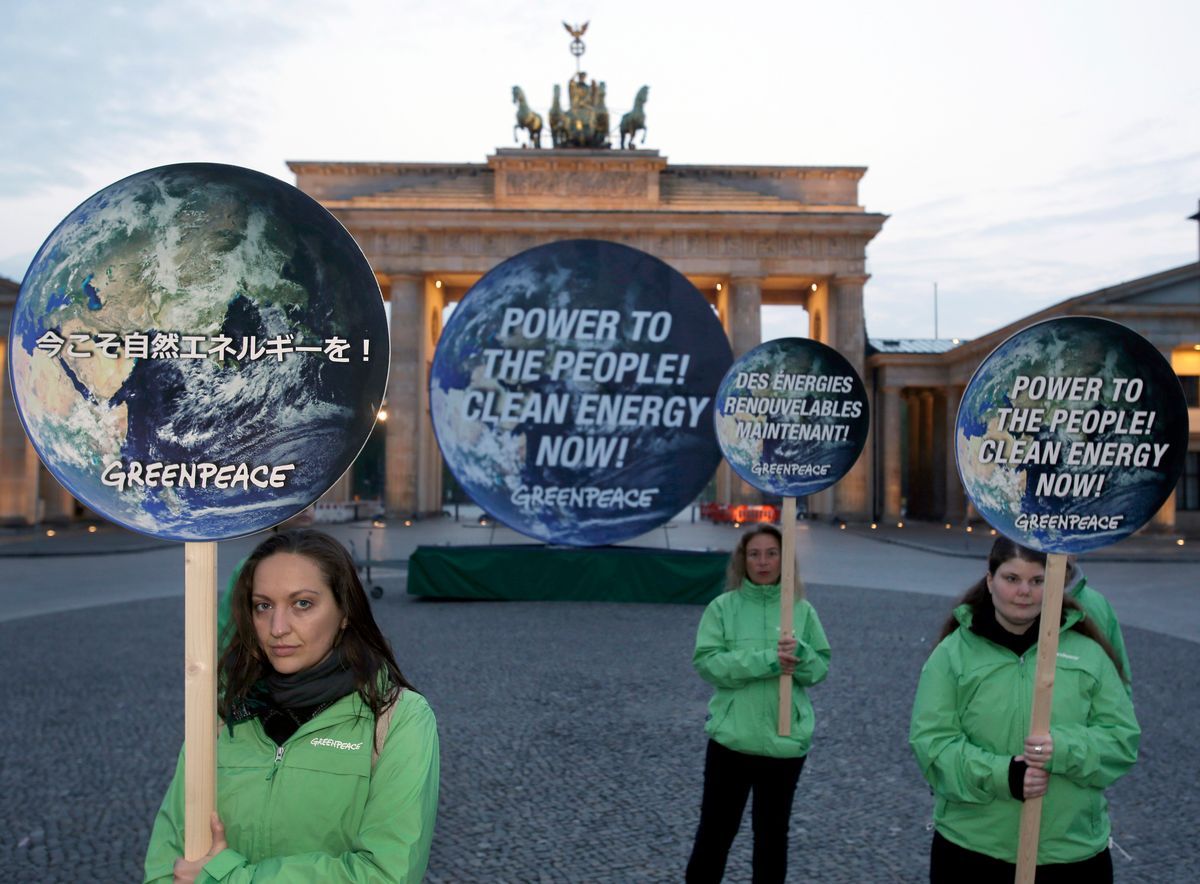 Activists of the international environmentalist organization Greenpeace pose with posters in front of the Brandenburg Gate in Berlin, Germany, Sunday, April 13, 2014 to support clean energy. After a one week meeting of the Intergovernmental Panel on Climate Change in Berlin the final document which is released on Sunday is expected to say that a global shift to renewable energy from fossil fuels like oil and coal are required to avoid potentially devastating sea level rise, flooding, droughts and other impacts of warming. (AP Photo/Michael Sohn) (Michael Sohn)
--

Already stressed by the threat of coronavirus and widespread unemployment, the United States has erupted into protests after the killing of George Floyd, a 46-year-old black man, by a Minneapolis police officer. Now, prominent groups in the environmental movement — which has long struggled with a dark, racist past — are speaking out against institutional prejudice and calling for the movement to better prioritize social justice.

"For too long conservation and environmental movements have not spoken up to address the long-standing challenges that non-white communities face," Fred Krupp, the president of the Environmental Defense Fund, said in a statement. "Environmental organizations should work to bring down the barriers that affect Black, people of color, and Indigenous communities."

The League of Conservation Voters, Earthjustice, 350.org, and the Sierra Club also issued statements condemning the killing of George Floyd and vowing to work towards racial justice. "There is no just recovery for climate, without addressing the systemic extraction, harm and violence towards Black communities," said 350.org in a statement on its website.

For the past few decades, green groups have been working to overcome the racist history of the environmental movement. Early conservationists were sometimes overtly racist, espousing white supremacy and encouraging the use of eugenics. In the 1960s and 1970s, many mainstream environmentalists were preoccupied with concerns over runaway population growth; prominent thinkers like Garrett Hardin and Paul Ehrlich encouraged sterilization programs. Hardin even suggested withholding food aid to developing countries during famines to cull global population.

Even when such blatant racism began to wane, many environmental groups, which tended to focus on wildlife and land conservation, continued to ignore issues that disproportionately impacted communities of color, like air pollution, water security, and extreme weather. Meanwhile, the leadership, staff, and volunteers of green organizations remained overwhelmingly white.

That may be beginning to change. According to a study published last week in the academic journal PLOS ONE, many environmental NGOs around the world are moving beyond conservation to focus on climate politics and environmental justice. A few months ago, the Green 2.0 initiative — which tracks racial and gender diversity in the environmental movement — found that people of color have increased on the staffs and boards of major green groups in the U.S.

Meanwhile, black and Latino communities in the United States are increasingly taking matters into their own hands. The number of organizations specifically focused on environmental justice is on the rise, and some have connected the fight for cleaner air and healthier communities with issues of police brutality and oppression. "When we say 'I can't breathe' — whether it is an officer with a knee on our neck or the pollution which continues to take away our breath — that's why we march and that's why we work so hard to change these dynamics," said Mustafa Santiago Ali, vice president of environmental justice at the National Wildlife Federation.

Ultimately, activists say, mainstream environmental groups will have to do a lot more than make statements in solidarity if they truly want to help address America's institutional racism. Only a small sliver of the billions of dollars flowing to the environmental sector in the U.S. goes to organizations focused on justice, said José Bravo, executive director of the San Diego-based Just Transition Alliance. "We need a share of those resources," he said, adding that equity for people of color needs to be more than just a sidebar for mainstream environmentalists. "Environmental justice needs to be at the forefront of what's being done and what's being advocated for."