Mitt Romney's support for black lives matters. But the bar should be higher for Democrats

It's one thing for a Republican like Romney to make symbolic gestures. Democrats must lead with meaningful action 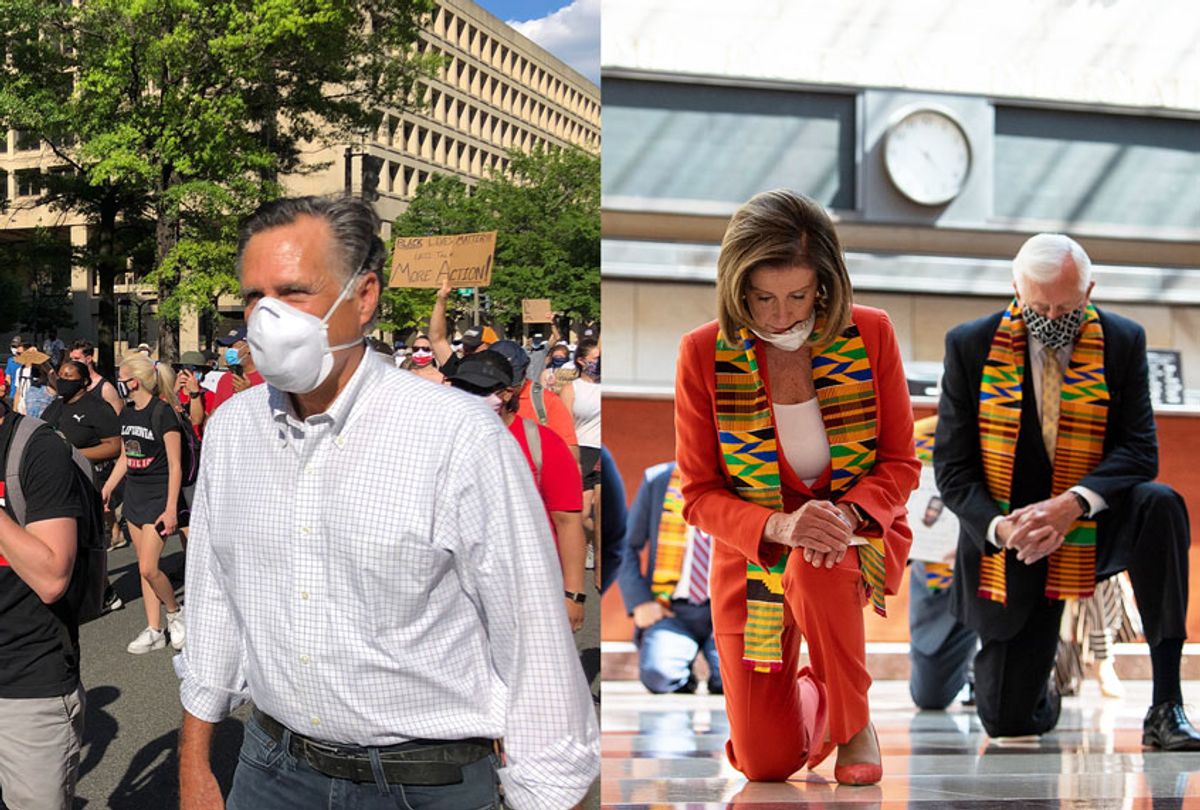 Sen. Mitt Romney (R-Utah) marches with a crowd singing Little Light of Mine | Members of Congress gather at the Emancipation Hall, kneel as they take moment of silence to honor George Floyd (Getty Images/Salon)
--

"We need to stand up and say that black lives matter."

Republican Sen. Mitt Romney's appearance at a Black Lives Matter march on Sunday, after nearly two weeks of civil unrest in the wake of the death of yet another unarmed black man at the hands of law enforcement and the seemingly endless police violence to suppress the protests that followed, in many ways represents that type of shift that's necessary for foundational change.

The Utah senator's support is but a symbol. As an elected lawmaker from the Republican Party, however, showing up and showing support for a movement like Black Lives Matter constitutes a real step in the right direction. Of course, Romney being completely out of a step with his party is precisely the reason that he, a white man, has received such widespread plaudits for such a minimal show of effort. The soft bigotry of low expectations strikes again. So at the risk of further centering a straight white man in a movement built by queer black women, let Mitt Romney — like his father before him — stand as a display of what direct action can accomplish in just a few short days.

After six days of riots in more than 100 cites following the assassination of Martin Luther King Jr., the House of Representatives passed the Fair Housing Act, otherwise known as the Civil Rights Act of 1968. The bill had survived a Senate filibuster on the day King was killed, but conservatives in the House planned to water down the legislation — until people took to the streets. In less than a week, amidst widespread looting and police violence, legislation expanding civil rights for black Americans was signed into law. A few months later Mitt Romney's father, George, then the secretary of Housing and Urban Development, worked to use the new law to desegregate the nation. Ultimately, the elder Romney's plan was stymied by Republican President Richard Nixon, who eventually ran Romney out of his Cabinet.

"I realize that this position will lead us to a situation in which blacks will continue to live for the most part in black neighborhoods and where there will be predominately black schools and predominately white schools," Nixon wrote of his move to stop Romney's desegregation plan.

More than half a century later, the pervasive racial segregation Nixon blocked George Romney from beginning to tackle — and which no successive presidential administration has yet attempted to end — is at the heart of what Mitt Romney, the first Republican in Congress to say so, means when he says, "black lives matter."

"Black lives matter" is not a partisan phrase. The disregard for black lives has been a bipartisan failure. Democratic mayors in cities across the country have long misappropriated taxpayer funds away from community investment to bloated police budgets.

Los Angeles Mayor Eric Garcetti had been pushing for a 7% overall increase in the city's police budget, after supporting a 5% pay increase for officers in the middle of the coronavirus pandemic, but announced that he will cut up to $150 million out of LAPD's nearly $1.5 billion budget to invest "in jobs, in health, in education and in healing." It's a drop in an already overflowing bucket, but it's a shift that absolutely would not have come without pressure from protesters.

The city of Oakland spent over 40% of its total budget on its police department, or less than 30 cents spent on social services like youth programs and housing support for every dollar given to the police in 2018. In Philadelphia, Democratic Mayor Jim Kenney took down the controversial Frank Rizzo statue, but his proposed post-pandemic budget decimates the city's main civilian police oversight board and a string of anti-violence programs, while funneling nearly $23 million in new funds to law enforcement.

Washington, D.C.'s Mayor Muriel Bowser capped a week of battle against President Trump by renaming the street in front of the White House Black Lives Matter Plaza. While she garnered national headlines for her symbolic show of resistance, she inadvertently left the last block of a giant mural blank for activists to fill with "defund the police," a statement followed up by one city council member who introduced amendments on Monday to "demilitarize and reduce" the district's police force.

In Minneapolis, where a group of police officers is charged in the death of George Floyd, 35% of the city's 2018 budget went to the police department. A few days after Floyd's death, a national poll found that a majority of respondents believe that the subsequent burning down of a Minneapolis police precinct was justified. On Sunday, a veto-proof majority of Minneapolis City Council members committed to disbanding the city's police department.

Whether it is a push to dismantle, defund or demilitarize the police, Democrats must do much more than topple statues of racists and utter slogans of solidarity. That low bar is for Republicans like Romney. For the party that routinely commands upwards of 85% of the black vote, however, Democrats would be wise not to neuter the revolution in real-time.

Former Vice President Joe Biden is already running scared from the language of defunding the police after Trump and Fox News spent the weekend fearmongering. In a galling tone-deaf move of empty symbolism, the Congressional Black Caucus draped House leaders, some of whom have fiercely opposed police reform in the past, with Kente cloth to introduce a watered-down package of reforms that fail to even eliminate qualified immunity for cops, a key necessity for real change.

The people, first catalyzed by a nearly 10-minute long video of a taxpayer-funded killing and then mobilized by days of white people young and old brutalized by an occupying force, have pushed this country on the issue of police violence and racism further and more quickly than at any time since the 1960s. Democrats can either get behind that direct action or get out of the way.