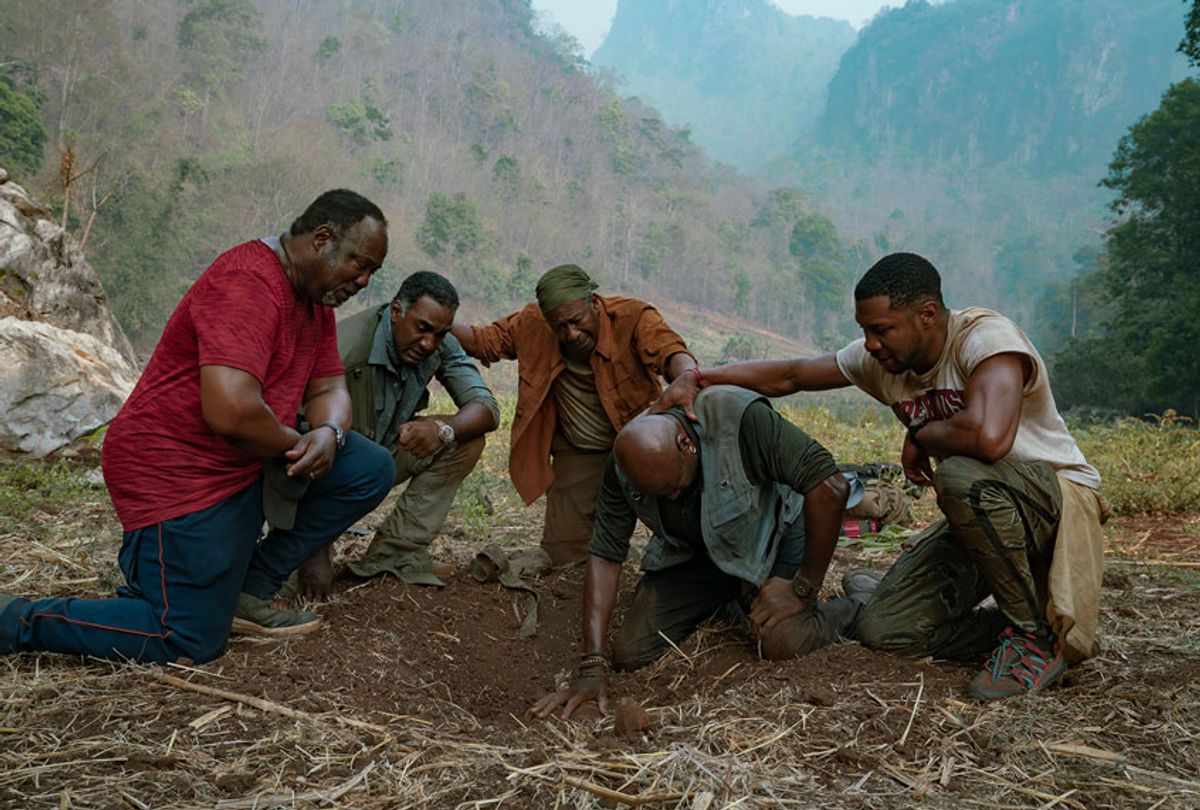 Part of recent conversations about race in culture returns to the reminder that any person who isn't white in America must by default have a basic, working knowledge of the favorite movies, TV series, and films of the dominant culture. This effort to learn and absorb generally doesn't flow in the other direction unless an artist, through the excellence of his creation, makes that exchange absolutely central to a moment in time.

This is what "BlacKkKlansman" director Spike Lee achieves with "Da 5 Bloods," currently streaming on Netflix and speaking a dialect near and dear to the American filmgoer – that of the war movie, specifically the Vietnam War. To most people this is the province of "Apocalypse Now" director Francis Ford Coppola, and Oliver Stone, who wrote and directed "Platoon." The conflict the citizens of Vietnam call the American War inspired many other films and characters who are automatically associated with the conflict, and the action film genre, including Sylvester Stallone's John Rambo and Chuck Norris' James Braddock.

None of these films feature the grueling combat experience from the perspective of the Black men sent over, a massive oversight Lee corrects in assembling a formidable unit of actors led by Delroy Lindo and Clarke Peters, and sending them on a track through a wilderness of concepts that never loses its way.

Lee's filmography defies specificity and categorization, although some of his films are certainly more successfully realized than others. But without question "Da 5 Bloods" ranks highly on the list of his most ambitious titles.

Foremost among its accomplishments is the confident ease with which it traverses many shades of human experience – fellowship, joy, anger, anxiety, regret, with a finish of resilient optimism that somehow manages to phoenix its way out of grinding sorrow. Lee does this by skillfully fading discrete genres into each other over the course of its two hour and 35 minute runtime.

What begins as a bucket list comedy featuring four old men soon unmasks itself as a heist film. Before we get too comfortable with that setup, the plot turns into a thriller laced with paranoia and grief, before picking up the already brisk pace into the frantic sprint of an action flick.

As with any war movie, the best-laid plans dissolve into heart-wrenching misfortune punctuated on the back half with a storm of bullets, explosions and pain, betrayal and faith undone by greed. Lee creates heroes in this narrative, of course, but they're not the one we're set up to predict at the film's outset.

Their covert mission is to retrieve a trunk of misplaced gold bars they happened across and buried during one of their combat missions. During the war, the foursome's agreed upon a goal of using it to help the lives of their oppressed brothers and sisters back home.

Ensuing decades and changed circumstances changed each man, however, and each carries his own trauma and anger into the jungle along with him.

Part of Lee's signature style is to incorporate situationally pertinent stills and archival footage within his pieces, giving the observer a moment to pause and reflect upon where this story fits into society's broader whole. "Da 5 Bloods" opens with archival footage of Muhammad Ali explaining his reasons for being a conscientious objector alongside wartime frames seen as still and moving, all of it gut wrenching.

From there, Lee pays homage to the celebrated stories and technicians of cinema, as he does in all of his movies. However, "Da 5 Bloods" tosses aside subtlety to deliver specific shout-outs to the subgenre's icons. "Ride of the Valkyries" plays over a boat tour downriver that would otherwise seem languid, and this effect is less for the entertainment of the viewer than to place us in within the mindset of these men living some fantasy version of their glory days. In a related moment, albeit with a different feeling, they guffaw at the ridiculousness of "First Blood" and the "Missing in Action" movies. The direct citations have an affection to them while the odes are channeled into extraordinary moments for the actors, Lindo in particular.

"Da 5 Bloods" is an ensemble piece that invites stellar performances from all of its principal actors. But Lindo's role is blessed with a level of complexity enabling him to take broad swings, each of them packing a wallop. None connect as hard as when Paul, a man thoroughly damaged by post-traumatic stress disorder and a red-hat wearing Trump supporter, must confront the ways by which he has failed his son David (Jonathan Majors) who surprises the band by showing up to lend assistance.

The entire premise is familiar to anyone who has read or seen the Humphrey Bogart film adaptation of "The Treasure of the Sierra Madre," trading the Mexican desert for the steamy, hot Southeast Asian jungle. But the script, which Lee and his co-writer Kevin Willmott adapted from a spec screenplay written by Danny Bilson and Paul De Meo, steps beyond plain adventure to slog through painful meditations on the extra burden Black American servicemen face in every war they fight.

The somber fact that each generation's hope that their sacrifices in body and soul will purchase dignity and equality for their people receives special attention here – underscored in one poignant transition with a pause to gaze upon portraits of Crispus Attucks, the first American killed in the American Revolution.

The Vietnam setting and timeframe accentuates this bitter tension between rage and resignation. Lee refuses to allow language to serve as a barrier to seeing the Viet Cong as human beings, translating every Vietnamese utterance, in one case to devastating effect.

Anguish cuts to the quick in English, too, as when the Bloods hear about the assassination of Martin Luther King, Jr. it is from the English-speaking Vietnamese radio personality Hanoi Hannah (Veronica Ngo). She points out while Black people make up only 11% of the U.S. population, they comprise 32% of American troops in Vietnam. "Black GI," she inquires, "is it fair to serve more than the white Americans who sent you here?"

Lee might as well be posing that question to the audience about the fairness of a culture that glamourizes violent heroics over healing, even as he places his Black (anti-)heroes within the same structure.

"After you've been in a war, you understand it really never ends," a character observes. "Whether it's in your mind or in reality, it's just degrees." In the end, "Da 5 Bloods" lands with the question of whether war can ever truly cease and leaves it open-ended, offering only hope's power to enliven noble struggles as an answer. In doing so it muscles its place into the ranks of this genre's greatest works.