Troops on the streets of Washington: Donald Trump, Herbert Hoover and the protesters

This wasn't the first time troops have been used in D.C. But you didn't read about the "Bonus Army" in school 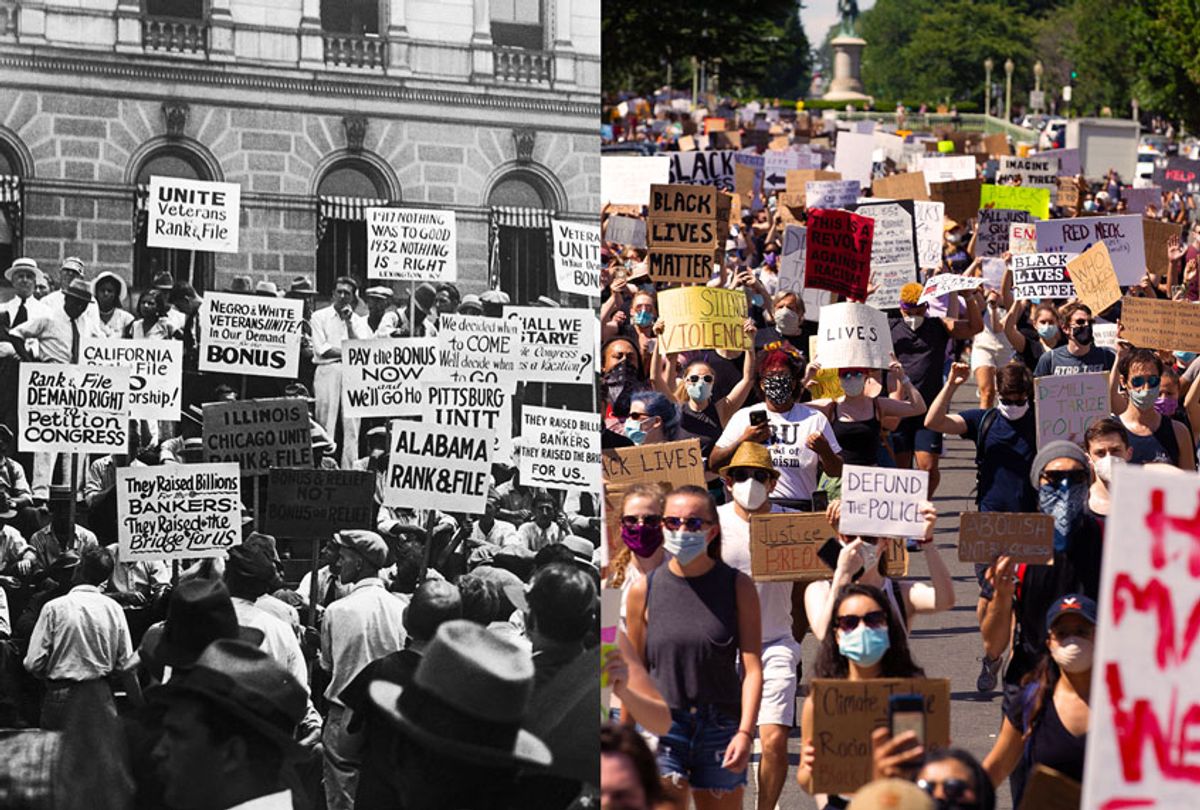 Veterans of World War I gather outside the Congressional Library in Washington, to demand the immediate payment of a cash bonus promised to them eight years before, 15th July 1932. | Hundreds of demonstrators walk down 16th street to the White House, during a rally north of Lafayette Square near the White House to protest police brutality and racism, on June 7, 2020 in Washington, DC. (Getty Images/Salon)
--

The events of June 1 in Lafayette Park, when citizens peacefully protesting the killing of George Floyd by four Minneapolis policemen were suddenly and violently dispersed by an odd assortment of members of the U.S. army, military police, and the Secret Service by means of pepper spray (if not technically tear gas), rubber bullets, and flash-bang grenades left many people asking: How could this happen here, in the United States of America?

Well, the U.S. military has been used before to put down a protest in Washington, in a protesters–military showdown that you almost certainly did not read about in the history books you perused in school.

In the prologue to his masterful "The Glory and the Dream: A Narrative History of America 1932-1972," William Manchester opens with the march of the Bonus Army on Washington:

In the desperate summer of 1932, Washington, D.C., resembled the besieged capital of an obscure European state. Since May some twenty-five thousand penniless World War veterans had been encamped with their wives and children in District parks, dumps, abandoned warehouses, and empty stores. The men drilled, sang war songs, and once, led by a Medal of Honor winner and watched by a hundred thousand silent Washingtonians, they marched up Pennsylvania Avenue bearing American flags of faded cotton. Most of the time, however, they waited and brooded. The vets had come to ask their government for relief from the Great Depression, then approaching the end of its third year; specifically, they wanted immediate payment of the soldiers' "bonus" authorized by the Adjusted Compensation Act of 1924 but not due until 1945. If they could get cash now, the men would receive about $500 each. Headline writers had christened them "the Bonus Army," "the bonus marchers." They called themselves the Bonus Expeditionary Force.

The title Manchester chose for his prologue is apt, poetic: "Rock Bottom." In the context of the scene he describes, a double meaning resides in that commonplace phrase: the hopes of the country scraping bottom as it suffered through the third year of the Great Depression and the response of the federal government to protesters exercising their constitutional rights falling to a nadir.

Manchester describes how the veterans had hoped for Congress to act and then, as the summer wore on, pleaded for an audience with President Herbert Hoover. But Hoover refused to meet with a delegation from the BEF, and then hid out in the White House:

Presidential plans to visit the Senate were canceled; policemen patrolled the White House grounds day and night. For the first time since the Armistice [of 1918], the Executive Mansion gates were chained shut. "Hoover Locks Self in White House," read a New York Daily News headline.

It should be noted that although he wished to isolate himself from any possible danger, Hoover had no bunker to repair to; the first White House bunker, reportedly a smallish affair under the East Wing, would not even be considered until December 1941, after the attack on Pearl Harbor.

In his "People's History of the United States," Howard Zinn writes of these World War I veterans, driven to desperation, arriving by rail from all over the country, often with their families in tow, in May 1932, their threadbare encampment matching their prospects:

More than twenty thousand came. Most camped across the Potomac River from the Capitol on Anacostia Flats where, as John Dos Passos wrote, "the men are sleeping in little lean-tos built out of old newspapers, cardboard boxes, packing crates, bits of tin or tarpaper roofing, every kind of cockeyed makeshift shelter from the rain scraped together out of the city dump." The bill to pay off on the bonus passed the House, but was defeated in the Senate, and some veterans, discouraged, left. Most stayed — some encamped in government buildings near the Capitol, the rest on Anacostia Flats, and President Hoover ordered the army to evict them.

In 1932, Hoover had seen the Bonus Army protesters occupy the city for a number of months and was feeling pressured by local business owners to clear the streets of veterans who were considered vagrants.

In 2020, on the morning of June 1, Trump reportedly spoke first to Russian President Vladimir Putin. Then he called on the governors to "dominate the streets" so they wouldn't "look like jerks." Then, at some point, he determined to provide an example with the takedown of the protesters outside the White House.

Not having been criticized for bunkering during a protest, Hoover of course had no desire to manfully parade in public. Trump and his coterie — including his daughter Ivanka; Attorney General William Barr, who reportedly gave the order to disperse the protesters and who now claims that pepper gas is "not chemical"; Defense Secretary Mark Esper; and the Chairman of the Joint Chiefs of Staff, Gen. Mark Milley — used the military action in order to walk from the White House across to St. John's Church. There, Trump awkwardly held up, and quizzically regarded, what he (responding to a question from a reporter) described not as a personal Bible but just as "a Bible." As photographers took their shots, Trump posed with that odd expression he often assumes with the press, what might be best described as Resting Mussolini Face.

Zinn continues the sad story, and we realize some real up-and-comers were involved in the action in 1932:

Four troops of cavalry, four companies of infantry, a machine gun squadron, and six tanks assembled near the White House. General Douglas MacArthur was in charge of the operation, Major Dwight Eisenhower his aide. George S. Patton was one of the officers. MacArthur led his troops down Pennsylvania Avenue, used tear gas to clear veterans out of the old buildings, and set the buildings on fire. Then the army moved across the bridge to Anacostia. Thousands of veterans, wives, children, began to run as the tear gas spread. The soldiers set fire to some of the huts, and soon the whole encampment was ablaze. When it was all over, two veterans had been shot to death, an eleven-week-old baby had died, an eight-year-old boy was partially blinded by gas, two police had fractured skulls, and a thousand veterans were injured by gas.

In Manchester's accounting of the scene in the city, right before MacArthur began the attack, thousands of the citizens — perhaps most of the people on the street at the time — were merely civil servants who had just departed work for the day and were now about to receive a staggering beatdown:

It was now 4:45 p.m. The operation had become the worst-timed in MacArthur's career. Fifteen minutes earlier, the District's civil service workers had begun pouring into the streets, their day's work done; twenty thousand of them were massed on the sidewalks across from the bewildered, disorganized veterans.

And, as we have witnessed in the current protests, the press could be treated with clear malice:

Most of those present were noncombatants, and some were professionally neutral, though armed authority regarded newspapermen with suspicion. One reporter darted into a phone booth outside a filling station to call his office; a soldier tossed a bomb inside and drove him out.

It is of interest today to read a description of Hoover by Walter Lippmann, in a piece published in Harper's Magazine in 1930, a couple years before the Bonus Army came to Washington. In "The Peculiar Weakness of Mr. Hoover," Lippmann writes that it is to be expected that inexperience in government would result in misjudgments in leadership:

Mr. Hoover … has had very little experience in the art of government. He has never before been elected to any office. He has never been a legislator, a mayor, a governor. His weakness seems to me to be due to just the kind of uncertainty which might be expected of a man who suddenly finds himself in a strange environment, especially a conscientious, tender-minded, thin-skinned man to whom the behavior of the crowd is alarming because it is alien.

Take away "conscientious" and "tender-minded" and Lippmann could be writing of  the man who occasionally appears in the Oval Office in our own time, with the lights of "The People's House" ready to be switched off by a trigger finger.

It should also be noted that Hoover attempted to stop the Army from crossing the river in pursuit of the retreating veterans, but his orders apparently were disregarded by a zealous MacArthur, who wanted to drive the protesters from their encampment. Apparently Eisenhower argued with MacArthur about the use of force against civilians, saying "This is political, political" again and again, in Manchester's account. Of the debacle, an unhappy Eisenhower later noted, "the whole scene was pitiful. The veterans, whether or not they were mistaken in marching on Washington, were ragged, ill-fed, and felt themselves badly abused. To suddenly see the whole encampment going up in flames just added to the pity one had to feel for them."

In 2020 America, about 70 of the protesters driven away from Lafayette Square later found themselves trapped by the military police in a residential street. They were fortunately rescued by a homeowner who called them inside and pushed back on the police. Reportedly, even as the homeowner began to intervene, when the protesters had nowhere to go, the police continued to fire tear gas at them.

So the American military not only used force, including gas, against those protesting the killing of George Floyd, but in the case of the Bonus Army, even against World War veterans — their very own.

Given that today's protesters are dealing with a heavily militarized police force and this particular president, who never served and who apparently has no understanding of military codes of honor and who displays only lip-service reverence to the Constitution, and who may also be taking advice on crowd control from the autocrat he admires most, and who often seems desperate to appear "manly," all bets are off.

Still, perhaps there is reason for hope of a better future. Facing resignations and a wave of intense condemnations from retired military, Secretary Esper and Gen. Milley both broke with Trump on his actions against protesters. And the thousands of protesters who have marched peacefully all over the country (and, indeed, now in many other countries) are proving — as did the stalwart citizens of Milwaukee and Atlanta in recent elections — that they are more than willing to show up to cast a vote (of some sort) even in a pandemic.

Zinn — whose "Peoples' History" should be required reading for high school students, as it provides a perspective on U.S. history decidedly not written from the point of view of history's "winners" — summed up the lasting effect of the calamity of the Bonus Army protests:

The hard, hard times, the inaction of the government in helping, the action of the government in dispersing the war veterans — all had their effect on the election of November 1932. Democratic party candidate Franklin D. Roosevelt defeated Herbert Hoover overwhelmingly, took office in the spring of 1933, and began a program of reform legislation which became famous as the "New Deal."