"Without police, there is chaos," the president said as he signed the order banning chokeholds in certain cases 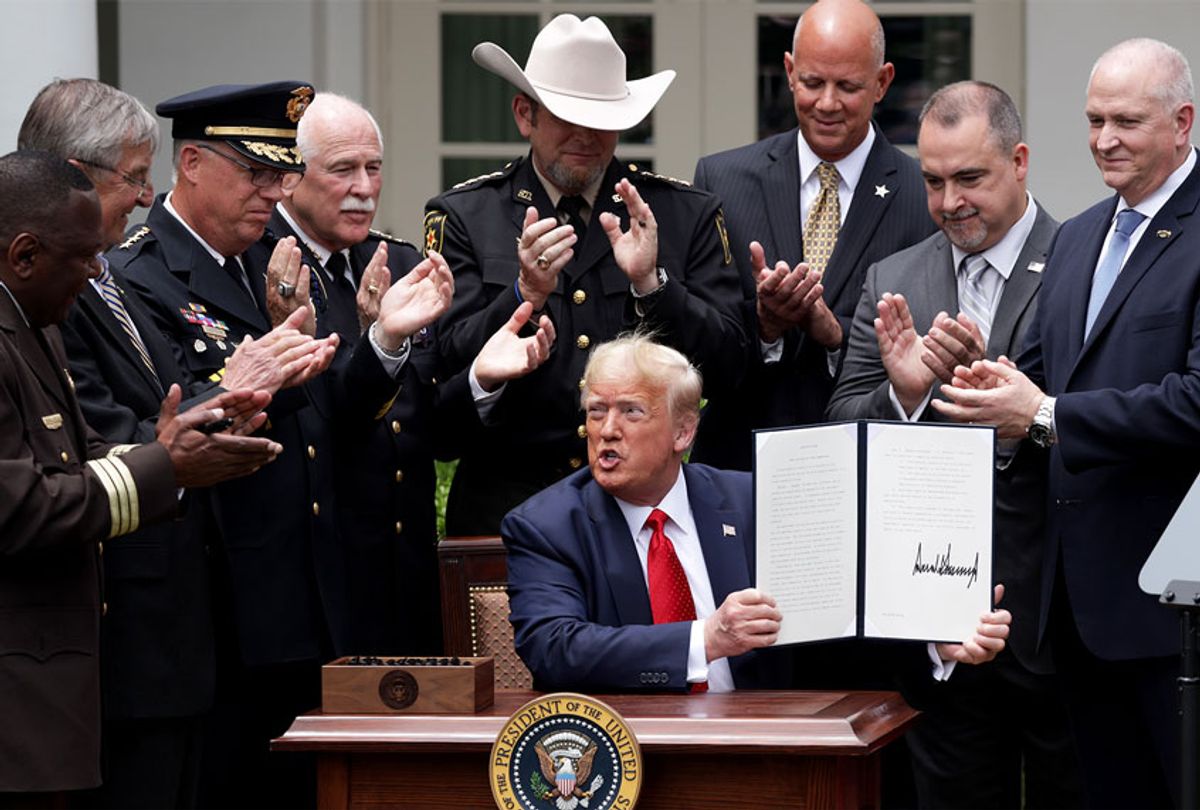 Surrounded by members of law enforcement, U.S. President Donald Trump holds up an executive order he signed on “Safe Policing for Safe Communities” during an event in the Rose Garden at the White House June 16, 2020 in Washington, DC. (Alex Wong/Getty Images)
--

President Donald Trump responded to mounting political pressure to reform the police Tuesday by signing an executive order to ban the use of chokeholds in some cases.

In a campaign-style speech ahead of the signing, Trump, flanked by uniformed officials, forcefully defended law enforcement and celebrated their response to the civil unrest which spread coast to coast following the death of George Floyd in the custody of Minneapolis police.

Trump said he earlier met with families of Ahmaud Arbery, Michael Dean, Botham Jean, Atatiana Jefferson, Cameron Lamb, Everett Palmer, Jemel Roberson, Antwon Rose and Darius Tarver, each of whom has lost loved ones to police violence. However, none of those individuals appeared with him in the Rose Garden, where the audience instead consisted almost entirely of law enforcement.

"These are incredible people . . . and it's so sad," Trump said of the families. "Many of these families lost their loved ones in deadly interactions with police." (All one of the families did.)

"To all of the hurting families, I want you to know all Americans mourn by your side," the president added. "Your loved ones will not have died in vain."

Trump, who has repeatedly attempted to cast himself as the heir to Nixon's "law and order" presidency, aligned himself with the officials on stage.

Americans "demand law and order," Trump, who is being sued after peaceful protesters were tear-gassed so he could have his picture taken in front of a church, said. "They may not say it. They may not be talking about it, but that's what they want."

"Without police, there is chaos," the president added.

Without citing any statistics, Trump went on to claim that there were only a "small number of bad police officers."

"They are very tiny. I use the word 'tiny.' It is a very small percentage," the president said. "But you have them."

The executive order, which Trump signed in the middle of the crescent of uniformed officials on a stage in the Rose Garden, fell well short of demands from activists and lawmakers.

In addition to the partial ban on chokeholds, the order encourages departments to engage in nationwide best practices and certification systems, as well as establishes a federal database to track officers with multiple citations of excessive use-of-force.

It also incentivizes police departments to develop co-responder programs, in which social workers and mental health experts join police on some nonviolent calls, and asks the Department of Justice to submit police reform legislation to Congress.

However, the directive does not make federal funding contingent on those reforms. Rather, it prioritizes grants for departments meeting certain requirements.

Trump characterized the order as holding police accountable to the "highest and the strongest" standards.

The partial ban on chokeholds — which are already banned in police departments across the country — has a carve-out for situations where it is legal to use lethal force.

The Staten Island police officer who choked Eric Garner to death in 2014 did not face criminal charges for using lethal force. However, the former Minneapolis police officer who knelt on George Floyd's neck for several minutes currently does, as do three accompanying officers.

In a Fox News interview with Harris Faulkner last week, Trump said the "concept of chokeholds sounds so innocent, so perfect." However, if a cop must fend off two opponents, "it's a little bit of a different story."

The Republican-led Senate is engaged in a separate effort spearheaded by Sen. Tim Scott of South Carolina, the chamber's lone Black Republican, which will focus on transparency, training and community relations.