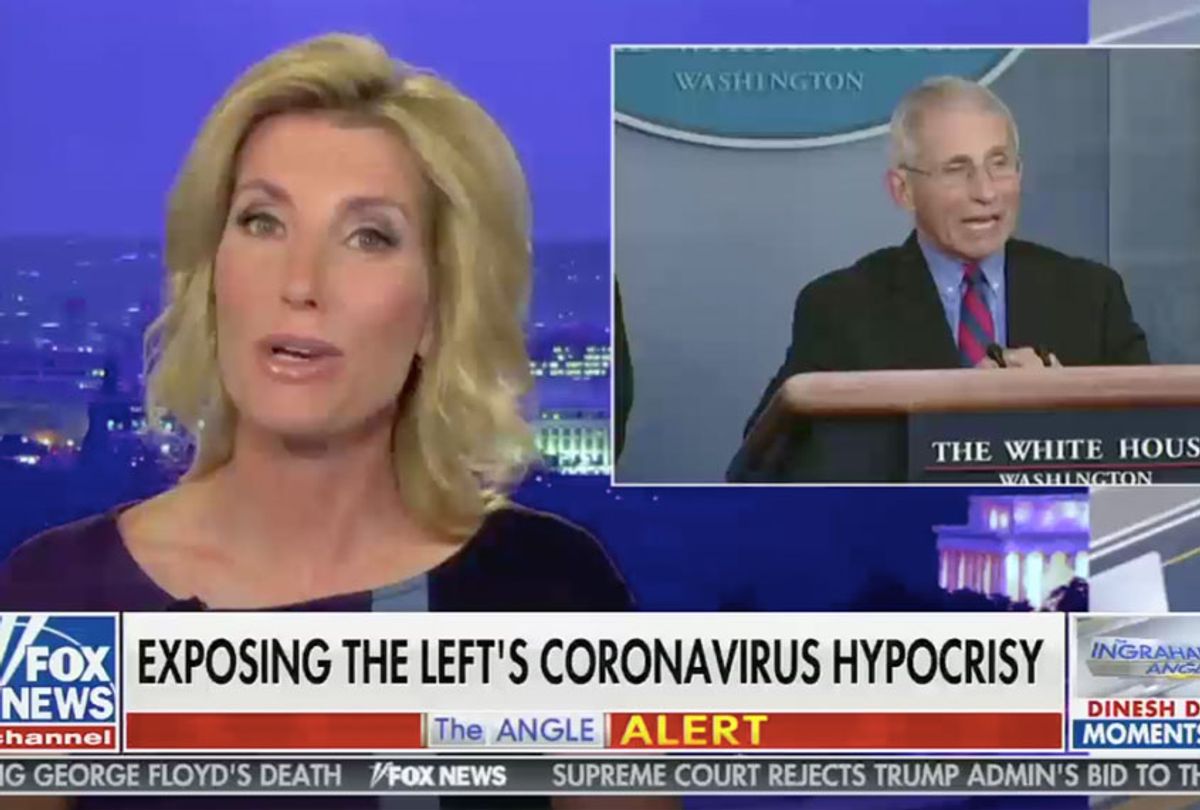 Fox News host Laura Ingraham, who has no background in medicine, used her primetime platform this week to deride Dr. Anthony Fauci, the 36-year head of the National Institute for Allergy and Infectious Diseases, as "the medical deep state."

Ingraham, who is not a doctor, also spoke directly to President Donald Trump's campaign, instructing it to ignore the "alarmist COVID drivel" surrounding a planned rally for June 20 in Tulsa, Okla.

"The president and his campaign should simply not react to any of this alarmist COVID drivel from here on out," Ingraham, who holds no advanced degrees in a scientific field, said on Monday.

"None of these people, sadly including Dr. Fauci, can be really taken all that seriously anymore given what we've seen, because science — just like journalism and entertainment — has become obscenely politicized," she continued.

Ingraham mocked Fauci over an interview in which he warned that "we could get back to some degree of normality within a year or so, but I don't think it's this winter or fall."

The Fox News host has for months dismissed coronavirus-related advice from public health experts on political grounds, turning instead to deep-state conspiracy theories and junk science to inform her analysis. Her misplaced faith on one occasion led to Twitter removing two posts, citing its "misleading information policy."

Ingraham on Monday once more lambasted "the science," which she claimed "has deemed it OK — essential, actually — to pack together outdoors in large crowds to protest in the name of liberal political causes" but "considers it unacceptably dangerous to attend large indoor gatherings."

"I'm sure it's just a coincidence that these super-spreader events happen to exactly match the campaign rally that Trump had planned over the weekend," she added.

"Now, why did none of these people wailing about the health hazards of Trump's future rallies voice any real sustained concern about the shoulder-to-shoulder protesters screaming at the top of their lungs?" she asked. (Epidemiologists have indeed raised concerns that the protests against police brutality sweeping the nation in the wake of the death of George Floyd may be a "super-superspreader" event.)

However, the prospect of Saturday's rally at the 20,000-seat BOK Center — which the campaign pushed back one day in response to backlash over the event coinciding with Juneteenth — has rattled not just Fauci and his cabalistic government public health agency but also local health officials who share the fear that it could precipitate a super-spreader event, as well.

The Tulsa City-County Health Department on Friday warned that the city had recorded its "highest daily increase of COVID-19 cases to date," and it believed that indoor gatherings were likely responsible.

"Initial investigations on cases reported this week have identified an outbreak linked to indoor gatherings, which large groups of people congregated in close contact for prolonged periods of time," the department said in a statement. "Investigations continue to determine how many of the new cases are associated with this outbreak."

"COVID is here in Tulsa," department director Dr. Bruce Dart cautioned the next day. "It is transmitting very efficiently."

However, Fauci, the alleged deep-state miscreant, did not go so far as to endorse postponement, saying in a Friday interview with an ABC News podcast that any large group presents "a danger."

"When you start to chant and shout, even though the instinct is to pull the mask down, which you see," Fauci said. "Don't do that, because there is a risk there. And it's a real risk."

The coronavirus has killed at least 116,000 Americans, according to the most recent data from Johns Hopkins University. Oklahoma was reported more than 8,600 cases and 363 deaths as of Tuesday.

The Tulsa Health Department on Tuesday was reported a total 64 deaths and 554 active cases; when the department issued its outbreak warning last Friday, it reported only 373 active cases.

Watch the clip below via Media Matters: