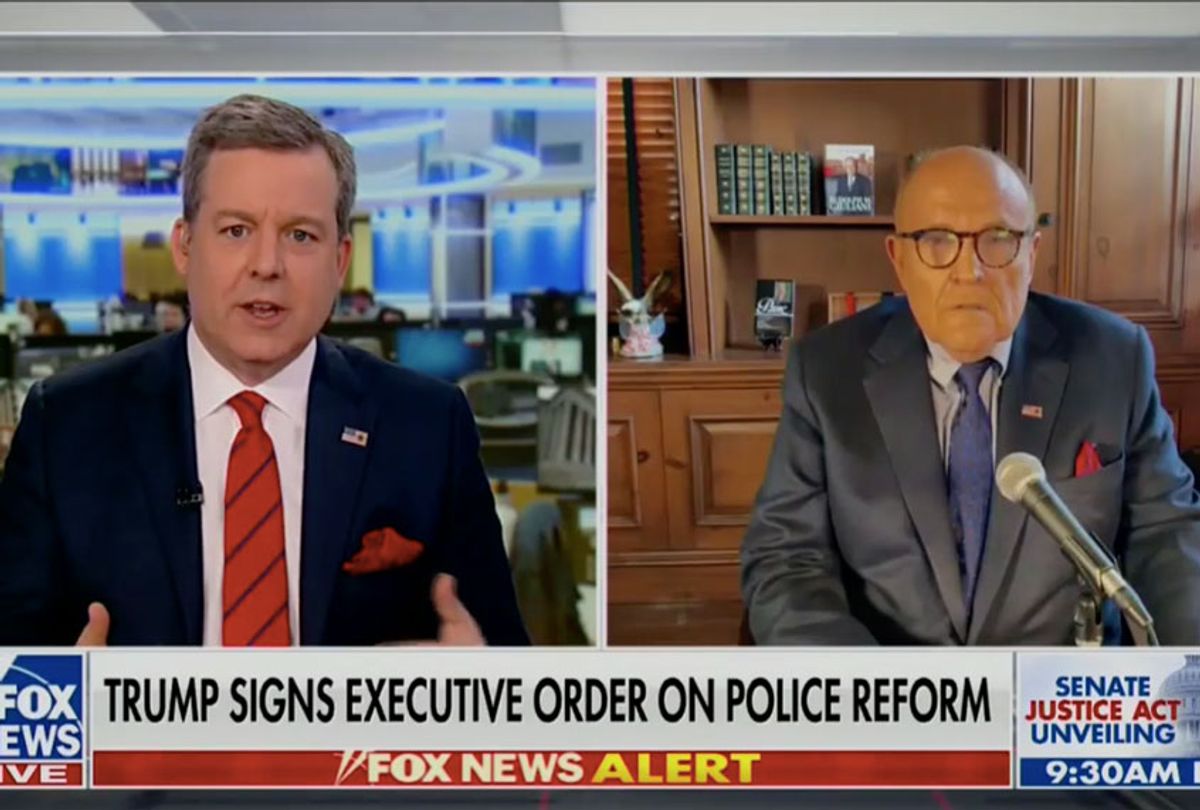 Giuliani made the false claim in response to Henry's questions about the progressive "defund the police" movement.

"That's a terrible, terrible overreaction to what's been created as almost a hysterical reaction to a single incident," Giuliani claimed. "And not just a single incident — some instances of police wrongdoing where they actually are unjustified in the use of force."

"As the president pointed out, and as we all know logically, 99% — if not more — of police contact with the public is appropriate," said President Donald Trump's personal attorney, who advises municipalities in developing countries on how to set up emergency management systems, an operation which many legal experts view as a vehicle for corruption.

Giuliani accepted $500,000 from a third-party investor in 2018 as a loan on behalf of Fraud Guarantee, a sham business set up by former Giuliani associates Lev Parnas and Igor Fruman, who carried out the off-the-books foreign policy campaign in Ukraine which led to Trump's impeachment.

Giuliani previously told Salon that he was introduced to Parnas through white-collar Florida attorney Jon Sale, a former law school classmate who briefly represented the former New York mayor during the impeachment inquiry before stepping down when news of the arrests of Parnas and Fruman arrest broke.

Sale — who at one point was involved with Giuliani in a business relationship with a tech company (TLO/Seisint) that offers services similar to Fraud Guarantee — confirmed his role in the Giuliani-Parnas connection in a phone call. Sale said a business partner of Parnas first approached him around or about May 2018.

Giuliani and Parnas first linked up because of interest in Fraud Guarantee, according to news reports.

In summer 2018, Sale and Giuliani met with a group of associates in New York, including Parnas and long-time Giuliani colleagues from his firm, Giuliani Partners, according to people familiar with the meeting.

In that meeting, the group openly discussed the investment appeal and viability of the Fraud Guarantee business model, which Giuliani's associates found weak. They recommended that the former mayor further vet and test the model.

Sale said he was compelled to conduct his own due diligence review of Parnas and the company, the results of which he found troubling and presented to Giuliani around the time the former mayor and Parnas solicited and accepted the $500,000.

Giuliani — who once accidentally texted a password to a Salon reporter — on Wednesday went on to espouse more stats to Henry that were irrelevant to his overall claim.

"The unarmed shooters, which are the ones that are troublesome — there are only nine of them against blacks, 20 against whites in 2019," Giuliani told Fox News. "So that will give you a sense. Meanwhile, there were 9,000 murders of blacks, 7,500 of which were black-on-black."

A Mediaite analysis found that Giuliani's claim was quite far from accurate.

Between 2015 and 2019, 86 cops were fatally shot in incidents involving a black offender. In that same span, 1,195 black people have been killed by law enforcement.

In addition to the Fraud Guarantee connection, Sale and Giuliani share a mutual client: the wealthy Venezuelan businessman Alejandro Betancourt, who was revealed as an unnamed co-conspirator in a criminal complaint filed in Miami in a $1.2 billion money-laundering probe related to the Latin American nation's state-owned oil company.

Giuliani and Parnas met Betancourt at a Yankees game in London last June. On that trip — in front of Parnas — Betancourt said he was eager to tap the former mayor's perceived influence over Attorney General William Barr. He also asked Giuliani to represent him in the criminal probe.

Specifically referencing Sale's legal talents, Parnas later told CNN that "the only reason Rudy was needed as well was to exert leverage with Barr."

About a month later, Giuliani and Parnas stayed at Betancourt's Spanish villa when the pair traveled to Spain to meet with a Ukrainian official. Giuliani reportedly met with Venezuelan President Juan Guaidó's father during the trip.

In September 2019, Giuliani sat down with senior DOJ prosecutors, including the head of the criminal division, to dissuade them from pursuing charges against Betancourt. He was joined in that meeting by Jon Sale, according to The New York Times.

Though Giuliani achieved international notoriety for his work on behalf of Trump in Ukraine, he has also reportedly conducted off-the-books, unsanctioned foreign policy negotiations with former Venezuelan President Nicolas Maduro as a way to smooth a transition for Guaidó, who was an acquaintance of Betancourt.

Though Giuliani's work involving Ukraine and Venezuela may appear to be coincidental, Parnas and Fruman actually figure into both.

In November, former U.S. Ambassador to Ukraine Fiona Hill made this connection when she testified that officials believed Parnas and Fruman were up to "strange things" in Venezuela.

"I was told that the same individuals who had been indicted had been interested at different points in energy investments in Venezuela," she said at the time, "and that this was quite well known."

Parnas associate Robert Hyde traveled to Colombia around the time referenced by Hill. Texts between Hyde and Parnas from that time reveal an apparent joint effort to stalk the ambassador in Kiev.

"Did I like his character? And did we have a lot of laughs and joke a little bit?" he asked. "Of course."

However, Salon obtained text messages from November 2018, predating the operation by several months, which were exchanged between Hyde and former business associate Jessie Tocco — a GOP lobbyist connected to the Pence family and with whom Hyde was having an affair.

In some of those texts, Hyde sent photos of himself with Parnas and Giuliani at a Florida campaign rally for Ron DeSantis and indicated to Tocco that he was in fact quite close to Parnas, who, according to the texts, had been the neighbor of Hyde's surrogate father.

Reached for comment, Giuliani clarified his remarks, writing in a text message which Salon has left unedited:

A 2015 Guardian analysis of public records and news reports found that "32% of black people killed by police in 2015 were unarmed, as were 25% of Hispanic and Latino people, compared with 15% of white people killed."

Giuliani did not respond to Salon's questions about Betancourt or Sale.

You can watch the Fox News clip below via the network: