"Another shameful step in the McConnell-Trump takeover of our judiciary" 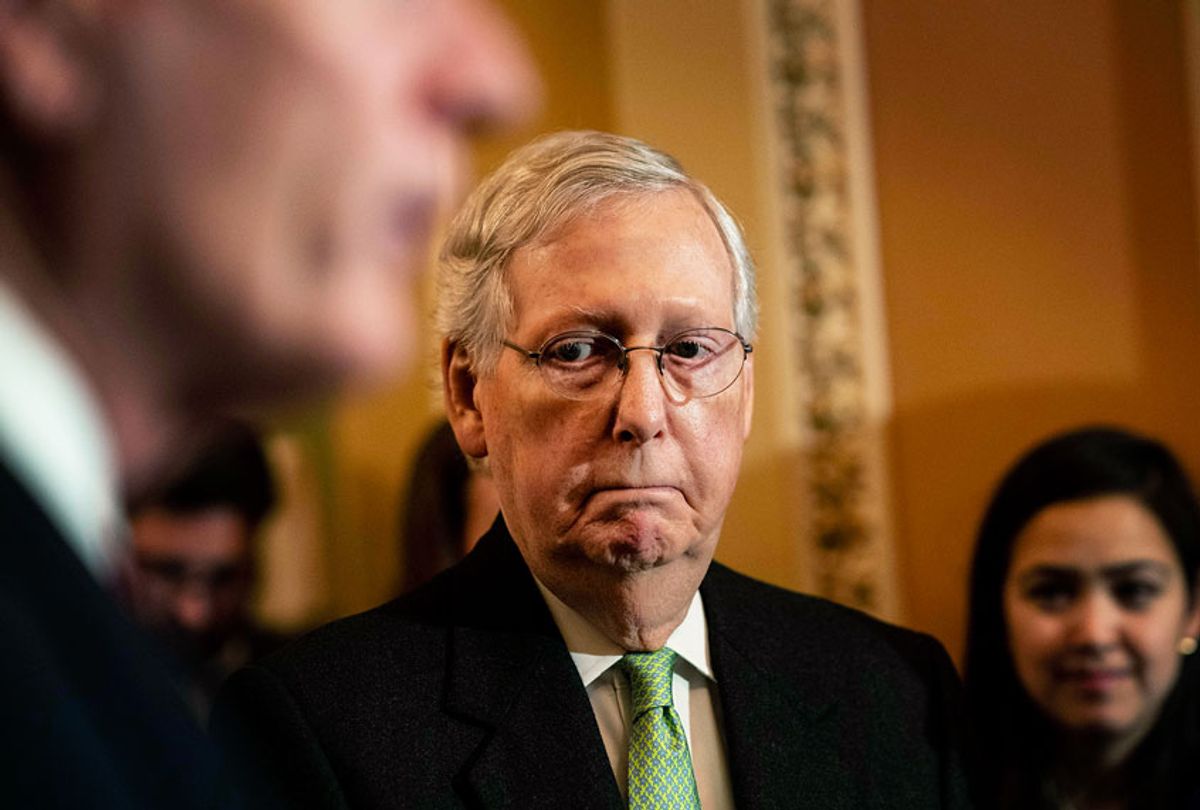 In spite of public pressure on Congress to prioritize providing more relief to Americans impacted by the ongoing coronavirus pandemic, the Republican-controlled Senate on Thursday advanced Majority Leader Mitch McConnell and President Donald Trump's right-wing takeover of the federal judiciary by confirming Justin Walker to U.S. Court of Appeals for the D.C. Circuit.

Walker is a U.S. district judge in Kentucky who previously interned for McConnell (R-Ky.) and clerked for Trump-appointed U.S. Supreme Court Justice Brett Kavanaugh. Advocacy groups against Walker's nomination to the nation's second-highest court highlighted his record of opposing the Affordable Care Act and warned that his confirmation "in the middle of a pandemic is beyond dangerous. It's deadly."

The 51-42 vote to confirm the 38-year-old to a lifetime appointment fell mostly along party lines; seven senators did not vote and Sen. Susan Collins (R-Maine), who faces a tough reelection in November, was the only Republican to side with all the Democrats present and Sen. Angus King (I-Maine) in opposing Walker.

"Every Senate Republican who voted for Walker knowingly abandoned the health and well-being of their constituents, and we won't forget it," Alliance for Justice declared after the vote. The group was among those that pressured senators to #StopWalker, citing his record on healthcare and the current crisis.

"Walker praised Kavanaugh for writing a 'roadmap' to gut the ACA and called the SCOTUS decision upholding the ACA 'catastrophic," Alliance for Justice tweeted shortly before his confirmation. "This is not what protecting our healthcare looks like."

Sen. Sherrod Brown (D-Ohio) made a similar point in a floor speech earlier this week. Sharing a video of his remarks on Twitter, Brown called out McConnell for pushing through a vote on his protégé "instead of helping families stay safe" during a pandemic.

Vanita Gupta, president and CEO of the Leadership Conference on Civil and Human Rights, has also spoken out against Walker over the past several months. On Thursday, she noted that his confirmation came as the Senate continued to ignore calls for police reform, a vote on House-approved COVID-19 relief, or important civil rights bills.

Walker will fill a seat on the federal appeals court in D.C. held by Judge Thomas Griffith, who is retiring in September. As Common Dreams reported last month, Sen. Lindsey Graham (R-S.C.) indicated during a radio interview that he is joining McConnell's campaign to push older federal judges to retire early as a way to ensure that Trump will be able to nominate their successors before the November election.

"This is an historic opportunity. We've put over 200 federal judges on the bench. I think one in five federal judges are Trump appointees," Graham, who chairs the chamber's judiciary committee, told radio host Hugh Hewitt. "So if you're a circuit judge in your mid-60s, late 60s, you can take senior status, now would be a good time to do that if you want to make sure the judiciary is right of center."

The Leadership Conference on Civil and Human Rights noted Thursday that in addition to holding a vote on Walker, McConnell also moved forward with another Trump nominee — Mississippi Court of Appeals Judge Cory Wilson, whose confirmation vote for the U.S. Court of Appeals for the Fifth Circuit is expected next week.

"Wilson has a record of deep hostility to civil rights," the group tweeted. "The country is calling for equal justice, and Wilson's nomination is antithetical to that. #StopWilson."