On Father's Day, Black dads and the fragility of our fortune

Growing up, Dad said Father's Day wasn't "a real holiday." Now that I'm a dad, I've decided to embrace it 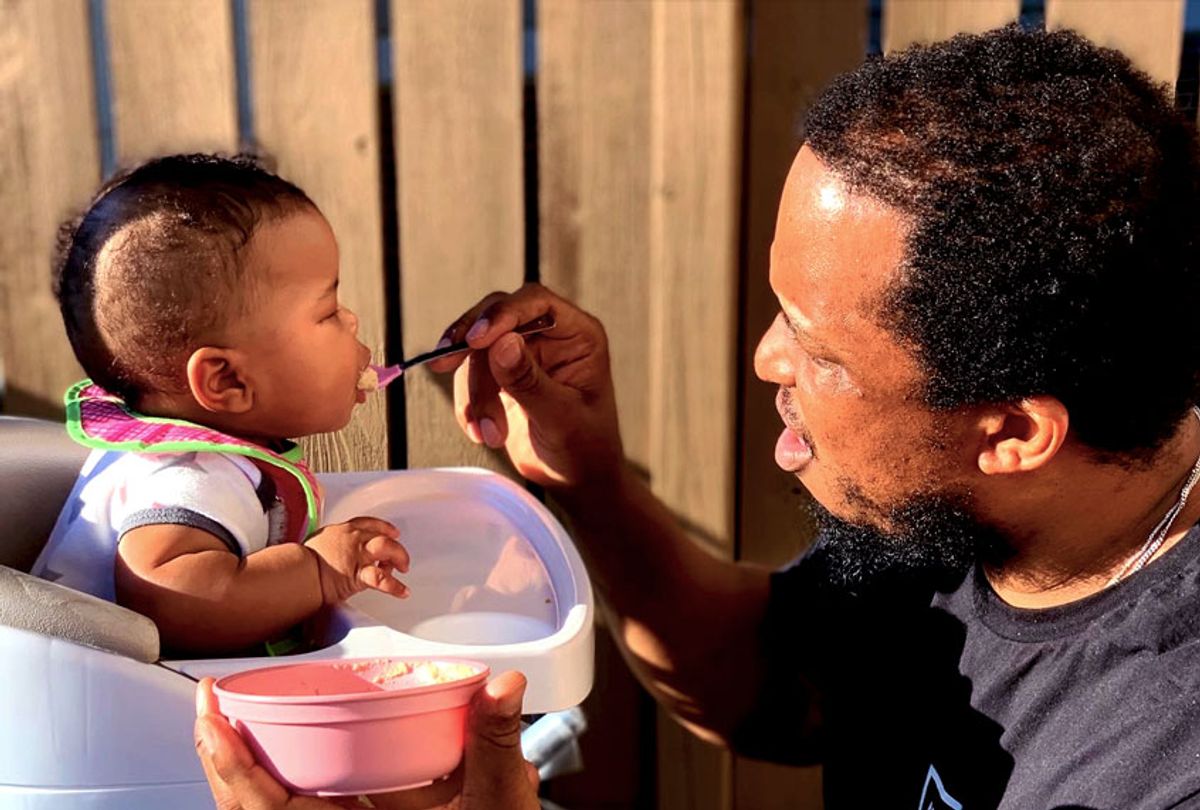 Fried chicken, mashed potatoes, sweet potatoes, collard greens, two or three types of biscuits with butter spilling in every direction, green salad, seafood salad, 7-Up cake, the German chocolate cake we called Black Sandy Cake because Miss Black Sandy from Glover St. reinvented that cake, bottles of Pepsi resting on ice in a big red cooler — all made by my dad. This is Mother's Day in Baltimore, 1990.

As an adolescent I didn't know much about Mother's Day, but I knew it had to be special because of the way Dad cooked for it. Now, he liked to cook when he was home and had money and time. But on this day, Dad had really cooked — like sweaty-browed, piles of clinking and clanking pots and pans stacking up to Shaq's height, kitchen smoke from turning the burners up too high clouding up the living room, Last Supper-Biblical feast kind of cook.  Our little home smelled like a five-star restaurant.

"What time we eating?" I asked yet again, yelling over Frankie Beverly and Maze cranking from the radio.

Dad turned the music down.

"This for ya muva and aunts," Dad replied, over the beat. "I'm gonna make you a big plate, but it Muva's Day, so all of the women eat first."

I ran across the street to get Ma so we could eat. She and the rest of the women were hanging at my aunt's house, all in Sunday dresses and colorful, carefully-crafted church hats covered in lace, net and pearls. All Black women from my neighborhood dressed up and went to church on Easter, New Year's Eve and Mother's Day.

"We going out to eat seafood," one of my aunts said. "Go tell ya father."

The same aunt said "Adults only!" and they loaded up in the car and pulled off. My cousin's eyes welled up with tears as we watched our mothers and grandmas drive away.

"Don't worry about it," I said, patting his back as he wiped the tears. "My fava cooked so much food, you can't even see what color the table is."

Food is good at solving problems. We ran over to my place, snatched some paper plates and started piling different dishes from the twelve-course meal my dad prepared. My cousin's tears dried as he stacked chicken on top of macaroni and cheese, and lumped collard greens and turkey necks on the side with even more chicken.

"I know, Dad, I know," I said. "They told me to tell you they're going out to eat seafood instead."

A barrage of curses from my dad followed — not at us kids, but at the idea of the women of our family knowing that he had been in there cooking, even requesting his food, and then going out to eat without even telling him. My cousin opened up to us about how much he had wanted to spend Mother's Day with his mom; they had been having a tough year. He had saved up money to spend a day treating her, and he wanted to celebrate her regally. But our aunt had insisted that the women go out as a group instead, and they did.

Dad fixed his face like he was about to say something negative, but then he softened.

"Still treat your mom," he told my cousin. "She deserves it. You gotta look out for her. Let her have fun with her sisters today, because it's her day."

"She loves you dearly," he added. "Everything will be OK."

Then he told us eat as much as we wanted.

"Look boy," Dad told my cousin as we finished fixing our plates and sat down to eat. "It hurts me that my lady asked me to cook for everybody and left without even telling me, but I'll get over it. And you will, too."

"I'm gonna look out for you on Father's Day," my cousin said.

"Man, whatever," Dad replied. "Mother's Day is special. That's a real holiday. Father's Day isn't — no one gives a sh*t about Father's Day. No need to celebrate that."

When you look at the history, it's easy to understand why my father felt that way. Father's Day wasn't even declared an official national day of observance until 1972. Father's Day as we know it grew out of one woman's campaign to honor her father, a widower who raised six children, in response to hearing a Mother's Day sermon in 1909. Energized by the message about mothers, Sonora Smart Dodd wondered why there wasn't a day to celebrate fathers and decided that something needed to be done. Dodd began celebrating Father's Day the following year in Spokane, Washington in June — as a belated honoring of her father's birthday — and the date settled on the third Sunday in June after that. While presidents as far back as Woodrow Wilson in 1913 supported the day, the first presidential proclamation honoring it didn't come until Lyndon B. Johnson signed one in 1966, and Richard Nixon made it a national holiday six years later.

Now my first Father's Day as a father is here, and it's still hard to wrap my head around. I didn't celebrate last year when my wife and I knew we were expecting; her pregnancy was still in the early stages, and we wanted to be on the safe side and not get too excited, in case something bad happened. This year is supposed to be different. Our baby is here now — chunky, happy, and always drooling through her magnetic smile that melts everyone in sight. I feel honored to be able to celebrate Father's Day because of this lovely girl; however, I've long struggled with celebrating myself out a fear of ending up like Job in the Bible, having it all snatched away.

Celebrating also makes me feel guilty because most of my closest friends are dead or in jail and I wonder why I get to be alive, free, with a happy family around me. And this year in particular, celebrating feels strange. I can't get past that clip of Gianna Floyd — daughter of George Floyd, the unarmed Black man executed on camera by Minneapolis police officer Derek Chauvin — out of my head. She spins on repeat, and makes me think of what my daughter's reality will be if something like that happens to me­. And it shocks me to my core.

Gianna has unintentionally become a central figure in our nation's struggle for equality. Her precious innocence and idealism, her dream of becoming a doctor, her light spirit has been broadcast across the world. The beauty of her existence mixes with the brutality of her pain, knowing she will have to grow up without her father — and even worse, knowing that her father died on camera for nothing more than the color of his skin. Thinking about her, and knowing she is going to have to process this throughout her life, has made thinking about my own Father's Day tough.

And this has been a tough year overall, for people everywhere — the coronavirus pandemic, which has killed Black Americans at a disproportionate rate, has left thousands of families in mourning. At the same time, the need to enjoy these special moments seems more urgent now, given how quickly they can disappear.

That urgency tells me I need to get out of my own way, pull on my dad clothes — my boot-cut jeans and short-sleeved flannel shirt buttoned all the way to the top, my comfortable walking sandals — and join my wife on our deck to celebrate my first Father's Day as a dad myself. Being a husband and father is special to me. It's my biggest honor. I know how precious it is; so many of my remaining friends never met their dads. I have a dad and I am a dad. Isn't that worth celebrating?

After all, America has a brutal history of pulling dads away from Black families, going back to the days of chattel slavery when husbands and wives were viciously separated from each other, their children snatched away and sold to other plantations, leaving many to never see their loved ones again. Enslaved children conceived through rape were often abandoned by their white slave-owner fathers, too.

Reconstruction offered few opportunities for Black men eking out an existence as sharecroppers or unskilled laborers. There were some success stories sprinkled around, like revolutionary and politician Robert Smalls, and Benjamin Montgomery and Nat Shaw, along with a few other prominent entrepreneurs, but they were far and few. Most Black men worked all day and weren't able to build nurturing relationships with their children. Jim Crow jailed so many men, too, creating even more fatherless homes.

Most people in America attain the same level of education as their parents, so if dad didn't finish high school, chances are his kids may not finish either. Black people have been in America since 1619 and most received virtually no formal schooling — in 1740, it became illegal to teach enslaved people to read or write— until after President Abraham Lincoln issued the Emancipation Proclamation in 1863. That is a 244-year head start given to white Americans. By the time Black people made it into the schools housed in raggedly buildings with outdated books and handed-down supplies from white schools, we were already being targeted, harassed and used to build the foundation for the current police state we live in now. Today an estimated 1 in 4 Black males are subject to the criminal justice system, another institution that pulls Black fathers away from their families, leaving American Black boys with a legacy of having too few reference points on parenting or what the role of a father should be. And yet we can point to the 2013 CDC report that shows Black fathers are more likely than white or Hispanic dads to be involved with their children. It's not a competition, but acknowledging that leadership is a huge step in fighting racist stigmas that make life more difficult for Black Americans. I can celebrate that.

I'm a dad and I have a dad. But my dad didn't have a dad, so our experiences come out of two generations of trial and error so far. Luckily, I have the luxury of learning from his mistakes. My generation of Black men — including those of us with shaky, troubled pasts — are committed to being present, loving fathers. We take fatherhood very seriously, calling out bad dads and disassociating ourselves from deadbeats. I can celebrate that.

My dad is too ill now to fix one of his big holiday meals for Father's Day this year. But he agrees with me that we've made progress, and now believes that good fathers should take some time to celebrate themselves and be celebrated. I'm going to celebrate that, too.