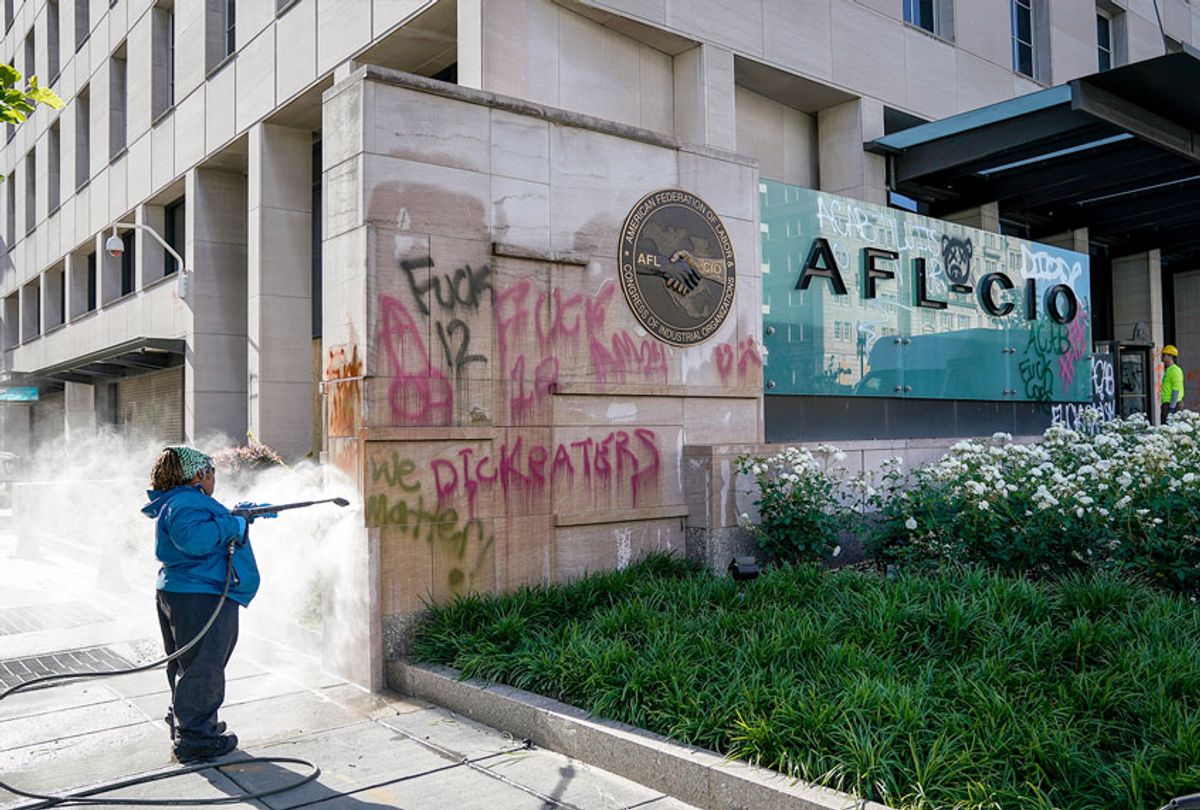 Workers clean graffiti off of an entrance sign to the AFL-CIO headquarters that was vandalized during overnight unrest, June 1, 2020 in Washington, DC (Drew Angerer/Getty Images)
--

Workers United in Upstate New York, a union representing 9,500 workers in New York state, is joining the growing call to kick police unions out of the labor movement.

In a statement today signed by more than 120 members, the union says that "conflating our mission with that of police unions undermines our solidarity," and says that white supremacy is central to our system of policing—"Therefore, we urge the labor movement to cut ties with police unions." The statement specifically cites the demand for the AFL-CIO to expel the International Union of Police Associations (IUPA), the labor coalition's major police union.

The demand is spreading throughout organized labor. Last week, the Writers Guild of America, East (disclosure: where I am on the council) passed a formal resolution calling on the AFL-CIO to kick out the IUPA, becoming the first AFL-CIO member union to do so. The Labor Council in Seattle has threatened to kick out its police union, and may do so later this month. The Association of Flight Attendants, another AFL-CIO member, passed a resolution "demanding law enforcement unions immediately enact policy to actively address racism in law enforcement and especially to hold officers accountable for violence against citizens, or be removed from the Labor movement." And the Minnesota AFL-CIO called for the resignation of the head of the Minneapolis police union, though it stopped short of calling for the union's expulsion.

"We thought we needed to not just speak out, but speak out strongly, and hold the labor movement accountable for changing practices with regard to police unions, and upholding a tradition of fighting fascism and fighting for justice," said Jaz Brisack, a Workers United organizer. She said that the statement on police unions is philosophically aligned with the justice-oriented industrial organizing model that the union pursues. Workers United of Upstate New York, which represents a broad range of workers from the garment industry, food service, racetracks, and other fields, is not an AFL-CIO member, though it is affiliated with SEIU.

Members of several other unions that are in the AFL-CIO have begun grassroots organizing efforts to push their own unions to pass similar resolutions to expel the IUPA.

The full statement from Workers United is below, and online here.

As Angela Davis said, "In a racist society, it is not enough to be non-racist, we must be anti-racist." To this end, we reject allyship and call for solidarity. Now is not the time for performative gestures, like the statements so many union-busting companies have released, but for actions that demonstrate the truth that an injury to one is an injury to all.

At its proudest moments, the labor movement has united workers of all races and identities in the class struggle. This is what we must work toward. However, it is not an automatic result of organizing. Our history also reveals many times when unions have valued whiteness over class solidarity. In order to fulfill our mission of fighting for our members and for the entire working class, we must recognize and eliminate white supremacy within our own ranks.

We further believe that conflating our mission with that of police unions undermines our solidarity, the principle we must hold dearest. Modern police departments evolved from vigilante groups and slave patrols. White supremacy within policing cannot be blamed on individual "bad actors," but must be understood as central to the institution itself. This origin also exposes the fact that policing was always intended to protect bosses' "property" — which then meant human beings — and to suppress workers' rights. Therefore, we urge the labor movement to cut ties with police unions. The AFL-CIO has said it supports Black Lives Matter. We join the Writers Guild of America, East, and their supporters, including Association of Flight Attendants president Sara Nelson, in calling on the AFL-CIO to make good on its word by expelling the International Union of Police Associations. We recognize that the fact that Black people are disproportionately working-class makes failing to be anti-racist and supporting police unions an even greater betrayal of working-class struggle and unity.

Finally, as the government attempts to designate anti-fascism as terrorism and as police question protesters about their political beliefs, we want to make it clear: We are Antifa. Fascism seeks to ban unions and prevent workers from organizing. It entrenches white supremacy and class domination. It is the ultimate threat to the working class. We have no other option but to be anti-fascist. We exist to defend workers against bosses, whose "property rights" are backed by the power of the state. The real looters are not poor people; the real looters are the wealthy who steal our labor for pennies. When they try to crush our movements, we fight back. We were Antifa when the bosses' hired mercenaries and their police and National Guard collaborators murdered union workers and their families in places like Thibodeaux, Butte, Lawrence, Ludlow, and Blair Mountain—and when we resisted. We will continue to resist all efforts to destroy our solidarity