The president also vowed to issue an executive order on the matter, though it remains unclear what it would do 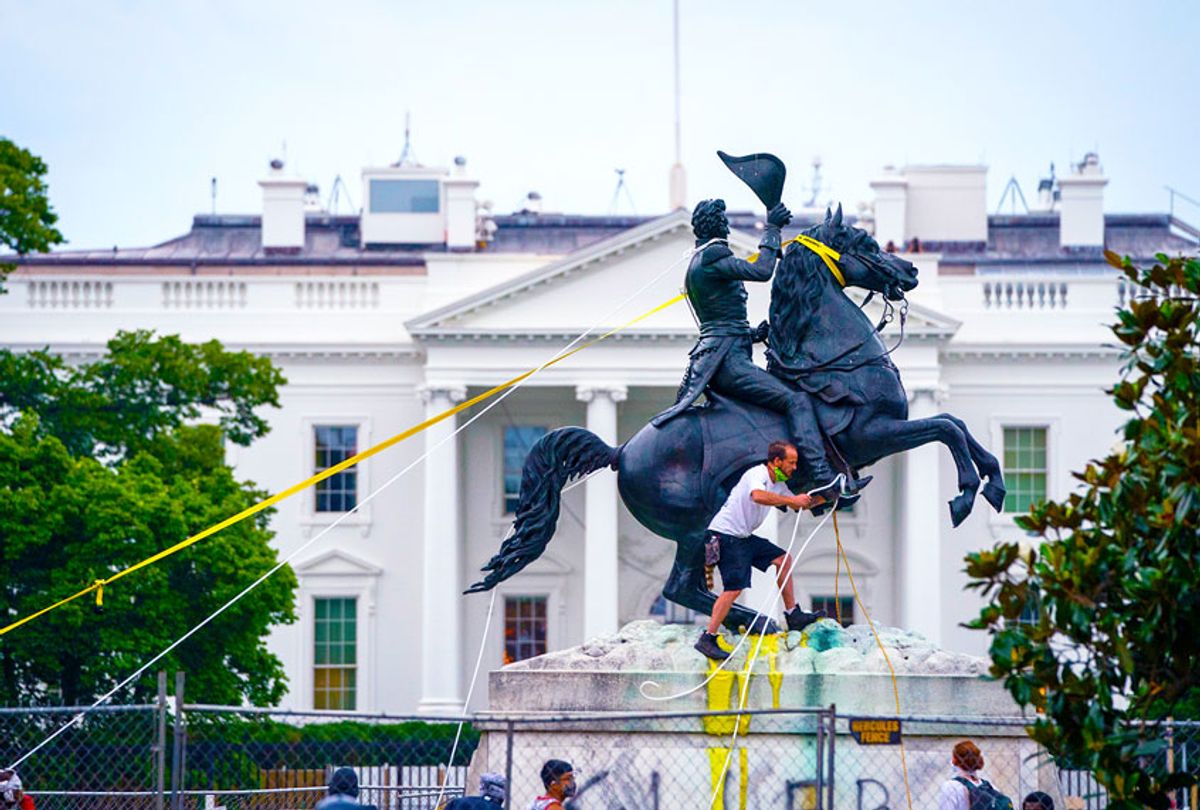 Protesters attempt to pull down the statue of Andrew Jackson in Lafayette Square near the White House on June 22, 2020 in Washington, DC. Protests continue around the country over police brutality, racial injustice and the deaths of African Americans while in police custody. (Drew Angerer/Getty Images)
--

Vowing to issue an executive order "shortly" on the matter, President Donald Trump on Tuesday threatened to jail anyone who vandalizes a federal statue for up to 10 years.

"I have authorized the Federal Government to arrest anyone who vandalizes or destroys any monument, statue or other such Federal property in the U.S. with up to 10 years in prison, per the Veteran's Memorial Preservation Act, or such other laws that may be pertinent," Trump tweeted. "This action is taken effective immediately, but may also be used retroactively for destruction or vandalism already caused. There will be no exceptions!"

The law says that anyone "who willfully injures or destroys, or attempts to injure or destroy, any structure, plaque, statue or other monument on public property commemorating the service of any person or persons in the armed forces of the United States" could face a fine or up to 10 years in prison. But it only covers statues on federal land and does not apply to statues on state, local or private land.

Trump's threat came in response to protests Monday in Washington. Police clashed with protesters after a group tried to topple a statue of former President Andrew Jackson in Lafayette Square.

"Last night, we stopped an attack on a great monument of Andrew Jackson and Lafayette Park," Trump told reporters on Tuesday, adding that he was a "fan" of his predecessor.

Jackson, a plantation owner, was a staunch supporter of slavery and responsible for the forced relocation of hundreds of thousands of Native Americans on the "Trail of Tears."

Trump added that he would issue an executive order on the matter, though it remains unclear what it would do.

"We are looking at long-term jail sentences for these vandals, hoodlums, anarchists and agitators. Some people don't like that language, but that's what they are: bad people. They don't love our country, and they're not taking down our monuments," he said. "I will have an executive order very shortly, and all it's really going to do is reinforce what's already there but in a more uniform way."

Trump appears to have seized on the law after Sen. Tom Cotton, R-Ark., who previously called for the military to police protests, sent a letter to Attorney General William Barr urging him to use the Veterans' Memorial Preservation Act against protesters.

Cotton called the protesters targeting statues "violent mobs," who have "defaced and torn down statues, memorials and monuments around our country."

"It's past time to stop the mob; these vandals should be prosecuted to the fullest extent of the law. Unfortunately, local authorities, who normally would prosecute such crimes, have proven unwilling in many cases to uphold the rule of law. In some cities, it appears that feckless politicians have directed police to stand idly by while mobs rampage," he wrote. "Thus, I urge the Department of Justice to bring charges against these criminals. They aren't exactly criminal masterminds, typically filming their crimes and posting the videos on social media. Federal laws such as the Anti-Riot Act and the Veterans Memorial Preservation and Recognition Act should cover some crimes."

"It's already a federal crime to deface or steal federal property, and an executive order can't make it any more of a crime," he wrote. "The government can arrest people for it whenever it can show probable cause that they have broken the law, and he can't change that, either."

"This isn't how this works" former U.S. Attorney Joyce White Vance agreed. "Congress makes laws. If someone violates them, they can be arrested by law enforcement. No Republican has the patriotism to tell this man, who heads their party, that he's not a dictator who can use the criminal justice system as a political tool."