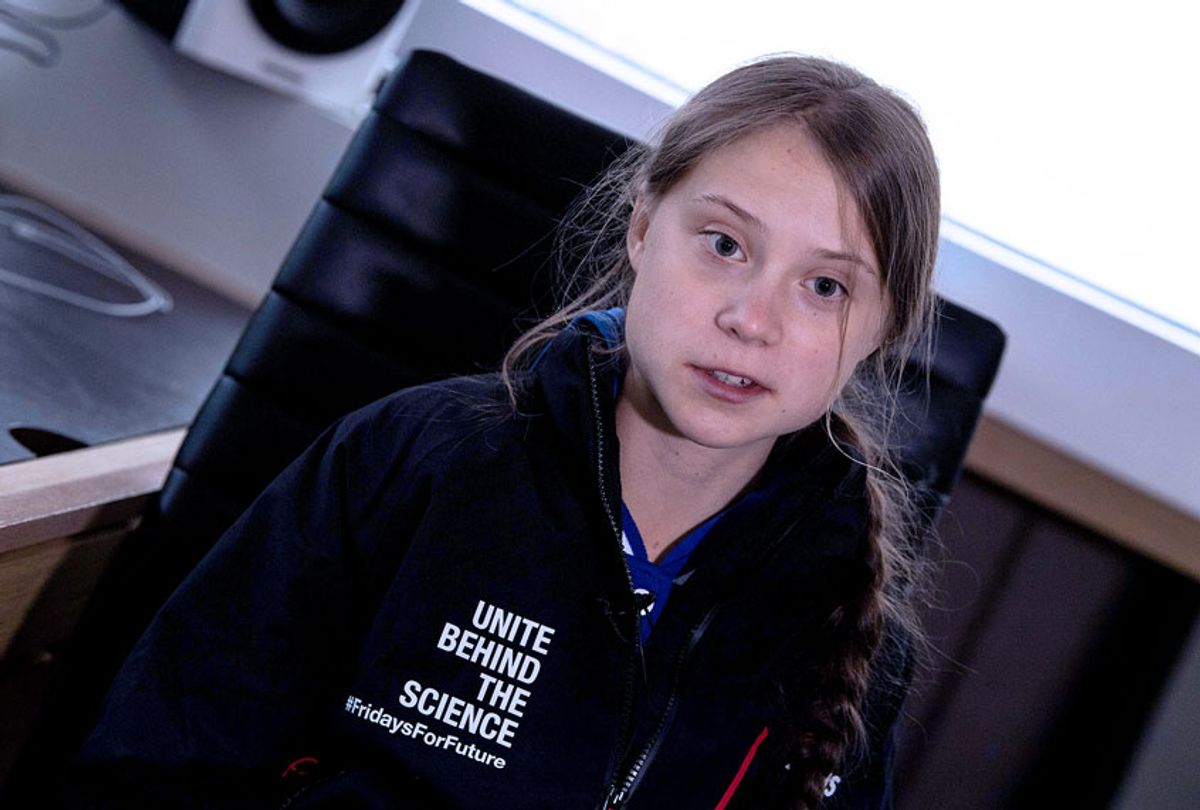 Swedish climate activist Greta Thunberg speaks to AFP during an interview aboard La Vagabonde, the boat she will be taking to return to Europe, in Hampton, Virginia, on November 12, 2019. - Swedish teen activist Greta Thunberg said November 12, 2019 that US President Donald Trump's climate change denialism was "so extreme" that it had helped galvanize the movement to halt long term planetary warming. (NICHOLAS KAMM/AFP via Getty Images)
--

"A crisis is a crisis, and in a crisis, we all have to take a few steps back and act for the greater good of each other and our society. In a crisis, you adapt and change your behavior."

That is one of the takeaway messages from a 75-minute radio program, "Humanity Has Not Yet Failed," that 17-year-old climate activist Greta Thunberg released Saturday. In the program, available in Swedish and English, the two-time Nobel Peace Prize nominee discusses climate science and activism; how polluting activities of industrialized, rich nations are driving global conditions that disproportionately impact poor and historically marginalized groups; and the failures of the existing economic and political systems.

Thunberg, whose solitary protests outside the Swedish Parliament inspired the global Fridays for Future movement, also shares stories from and reflections on her recent travels as one of the world's most recognized climate leaders. In August 2019, she sailed across the Atlantic Ocean to the United States. After speaking at a United Nations Climate Action Summit in New York City, she appeared before the U.S. Congress and joined various protests demanding climate action while exploring North America.

That it falls on young people like her to direct global attention to scientific warnings about the climate and ecological emergency, Thunberg says, should be seen as "a failure beyond all imagination." That journalists and others often ask her how the international community should solve this "existential crisis," rather than listening to the scientists, is "absurd."

"People want something simple and concrete, and they want me to be naive, angry, childish, and emotional," Thunberg says, recalling an encounter with a Swedish journalist while criticizing how the global media has covered both her activism and the climate crisis. "That is the story that sells and creates the most clicks."

During her tour of North America, Thunberg saw some of the impacts of the climate crisis, traveling to Paradise, California, which was devastated by the Camp Fire in 2018, and the receding Athabasca Glacier in Jasper National Park, which is located in oil-rich Canadian province Alberta — the only place Thunberg was discouraged from visiting.

"Alberta has a very powerful and highly criticized oil lobby that is well known for its harsh methods to silence anyone they consider a threat to their industry, and I'm definitely considered a threat to them," she explains. "On several occasions, I need to call for police protection when the level of threats and the sheer harassment become too serious."

After the 2019 U.N. Climate Change Conference (COP25) was moved from Santiago, Chile to Madrid, Spain, Thunberg sailed back to Europe for the event. Some of her future travels, including a potential trip to China, were canceled due to the ongoing coronavirus pandemic, which has caused lockdowns and travel restrictions globally for the past several months.

The COVID-19 crisis — which has led the Fridays to Future movement to move to mostly digital campaigning — could serve as a wake-up call to the world about the type of action required to tackle the climate crisis, Thunberg argues while acknowledging the "catastrophic" impacts of the pandemic on people around the world and the global economy.

"The corona tragedy of course has no long-term positive effects on the climate, apart from one thing only: namely the insight into how you should perceive and treat an emergency. Because during the corona crisis we suddenly act with necessary force," she says, pointing to international meetings, massive financial bailouts, canceled events, tough restrictions, and focused media coverage.

While there are growing calls across the globe for a "green recovery" from the pandemic, Thunberg expresses concern that such plans will not go far enough in terms of transforming systems that contribute to the climate crisis; throughout the program, she repeatedly makes that case that "the climate and ecological crisis cannot be solved within today's political and economic systems."

Even if policymakers want to pursue ambitious climate action, their efforts are hampered by existing plans for polluting activities like fossil fuel production, she explains. "If we are to avoid a climate catastrophe, we have to make it possible to tear up contracts and abandon existing deals and agreements on a scale we can't even begin to imagine today — and that alone requires a whole new way of thinking, since those type of actions are not politically, economically, or legally possible today."

"A lot may have happened in the last two years, but the changes and level of awareness required are still nowhere in sight," Thunberg says near the end of the program. "Things may look dark and hopeless, but I'm telling you there is hope and that hope comes from the people, from democracy, from you—from the people who more and more themselves are starting to realize the absurdity of the situation."

"The hope does not come from politics, business, or finance — and that's not because politicians or businesspeople are evil, but because what is needed right now simply seems to be too uncomfortable, unpopular, and unprofitable," she continues. Although public awareness and demands for progress aren't yet strong enough, Thunberg adds, "there are signs of change, of awakening."

"Just take the 'Me Too' movement, Black Lives Matter, or the school strike movement, for instance. It's all interconnected. We have passed a social tipping point. We can no longer look away from what our society has been ignoring for so long, whether it is equality, justice, or sustainability," she says. "From a sustainability point of view, all political and economic systems have failed, but humanity has not yet failed."