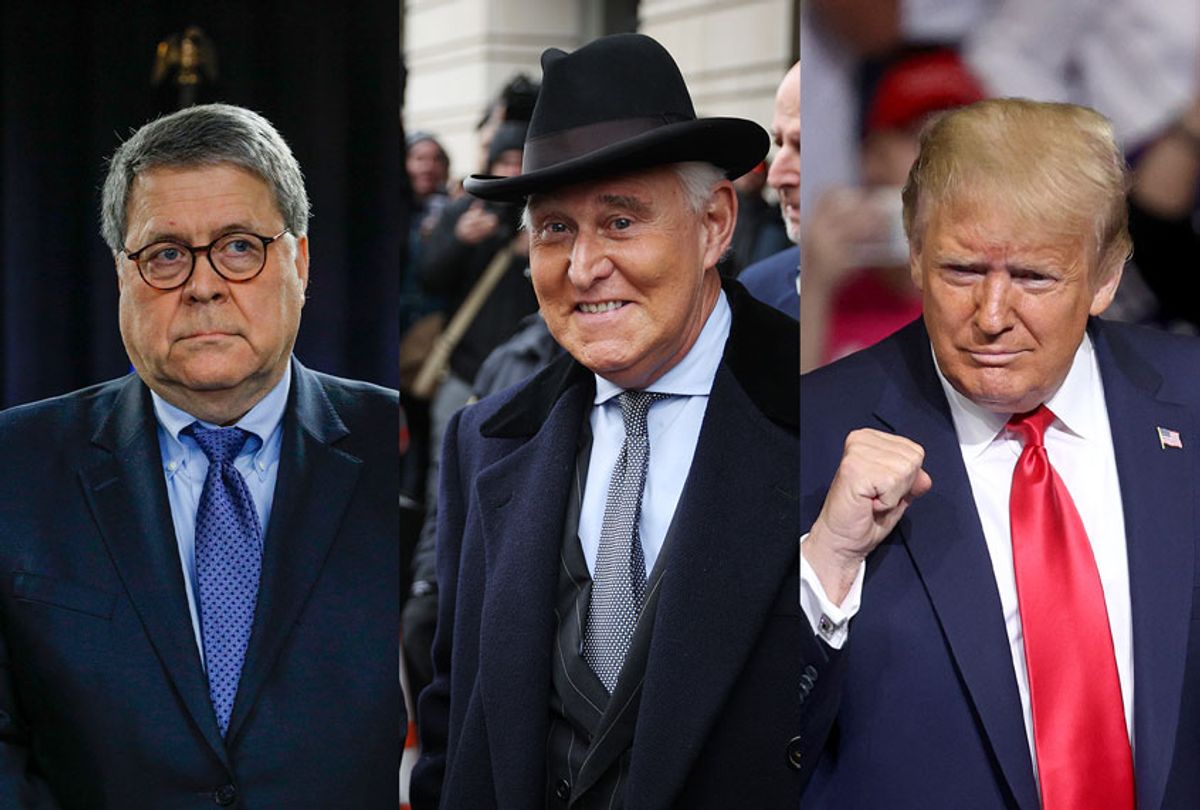 A top Department of Justice prosecutor who worked on former special counsel Robert Mueller's case against Roger Stone will testify Wednesday to Congress that the political provocateur's sentencing was politicized.

"What I heard — repeatedly — was that Roger Stone was being treated differently from any other defendant because of his relationship to the president," Aaron Zelinsky, the prosecutor, says in prepared testimony submitted Tuesday to the House Judiciary Committee.

Timothy Shea, the acting U.S. attorney for the District of Columbia, was under "heavy pressure from the highest levels of the Department of Justice" to cut Stone "a break," Zelinsky adds.

Barr had recently handpicked Shea, an ally from his own office, to replace Jessie Liu, who the attorney general removed only weeks earlier.

"I was also told that the acting U.S. attorney was giving Stone such unprecedentedly favorable treatment because he was 'afraid of the president,'" the testimony says.

Zelinsky was a senior prosecutor for Mueller's team during the Russia probe. Stone's conviction last November on all counts — obstruction, witness tampering and making false statements — was one of the team's top accomplishments. In newly unredacted sections of the Mueller report, the former special counsel weighed the possibility that Trump had been untruthful in the written answers he submitted.

In a stunning public display, Justice Department officials in February rejected the by-the-book sentencing recommendation proffered by Zelinsky's prosecutors. Without further specificity, the department asked the court for a more lenient sentencey. Zelinsky observes it as "matching the president's tweet from that morning."

Trump had complained about the sentencing recommendation just hours before Attorney General William Barr handed down the reversal.

"This is a horrible and very unfair situation," the president had tweeted. "The real crimes were on the other side, as nothing happens to them. Cannot allow this miscarriage of justice!"

"We knew Trump had been signaling allies like Stone and Manafort with his tweets applauding their refusal to become 'rats' and flip on him," national security attorney Bradley Moss told Salon. "Now we have insider confirmation he was fixing things behind the scenes to get them off the hook too wherever possible."

Asked whether he could recall precedent for a federal prosecutor turning to testify against the department in this manner, Moss pointed to James Comey's testimony about secretive wiretapping in 2007.

"In the United States of America, we do not prosecute people because of their politics," Zelinsky writes in his testimony.

"And we don't cut them a break because of their politics either," he continues. "In the many cases I have been privileged to work on in my career, I have never seen political influence play any role in prosecutorial decision making. With one exception: United States v. Roger Stone."

According to Zelinsky, his team supervisor made it clear that the move was "unethical and wrong." Moreover, he said the decision on the part of acting U.S. Attorney Timothy Shea was motivated by "political reasons."

Zelinsky, who claims his objections to the decision were tossed out, eventually broke rank when all four prosecutors working on Stone's case withdrew after Barr handed down the directive.

"I don't see how a prosecutor *could* explain this," former federal prosecutor Renato Mariotti tweeted. "Yesterday they told the judge that a sentence of seven to nine years was appropriate for Roger Stone. Today they're supposed to argue that they were wrong yesterday? Any judge would ask: What changed between yesterday and today?"

Amy Berman Jackson, the federal judge in the case, handed down a far shorter sentence than Zelinsky's team had recommended — just over three years — but largely ignored Barr's pleas.

"This is intolerable to the administration of justice, and the court should not sit ideally by, shrug its shoulders and say, 'Well, that is just Roger being Roger,'" Jackson said. "The truth still exists. The truth still matters. Roger Stone's insistence that it doesn't . . . [is] a threat to our most fundamental institutions — to the foundations of our democracies. If it goes unpunished, it will not be a victory for one political party: everyone loses. The dismay and disgust at the defendant's belligerence should transcend party."

Stone said in a Facebook post Sunday that he plans to file for a delay on the start date, citing concerns about his age and the spread of COVID-19 in prisons.

Zelinsky, who was reassigned to the U.S. attorney's office in Maryland, will be joined in front of Congress by John Elias, an antitrust prosecutor who plans to testify that Barr personally ordered his division to carry out politically-motivated reviews of ten cannabis company mergers.