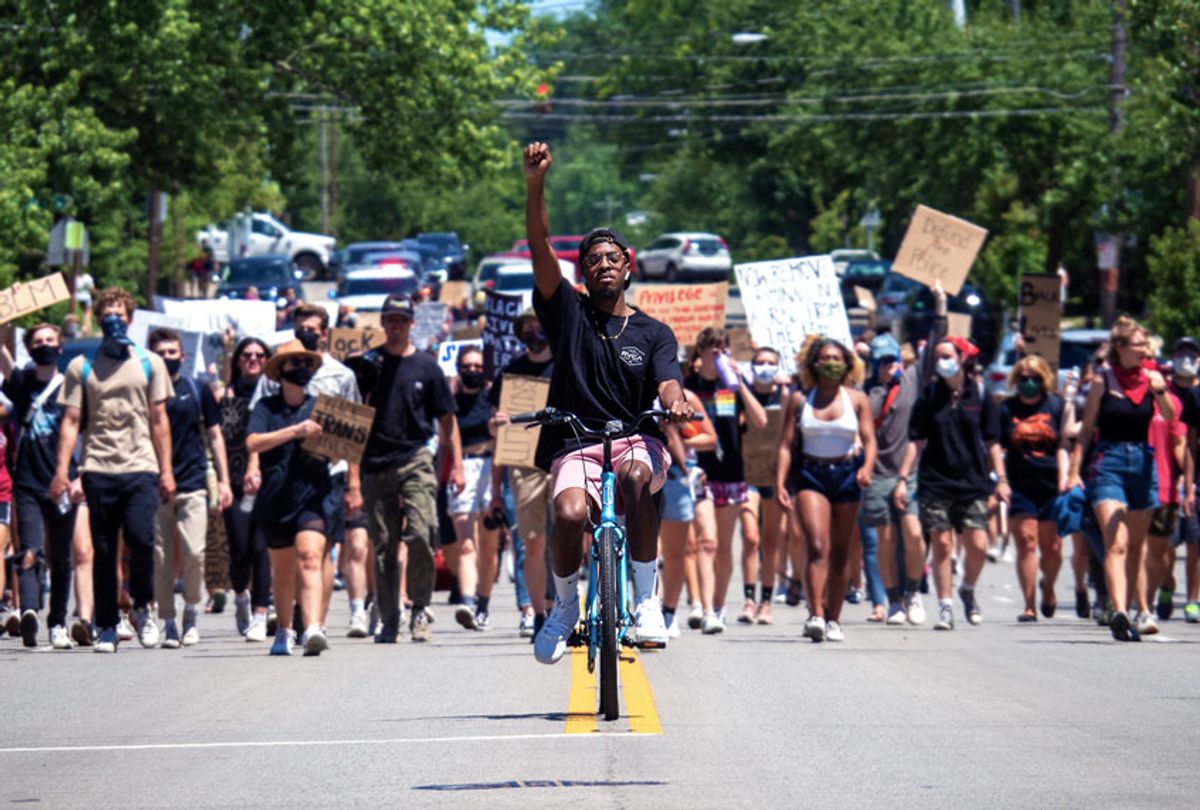 Demonstrators raise signs in the air during the Oakley Hyde Park Protest as demonstrators continue to march in protest for the 15th straight day over the murder of George Floyd and other victims of police brutality, Friday, June 12, 2020, in Cincinnati, Ohio, United States. (Jason Whitman/NurPhoto via Getty Images)
--

New research released Monday indicated that the nationwide anti-police brutality demonstrations which erupted in the U.S. after the killing of George Floyd have not led to widespread transmission of the coronavirus, as some public experts feared they would.

The National Bureau of Economic Research used anonymous cell phone data and local CDC information about Covid-19 infection rates since the protests began in late May, to examine the growth in cases in 315 cities.

"We find no evidence that urban protests reignited COVID-19 case growth during the more than two and a half weeks following protest onset," the report said.

Protests are still continuing four weeks after Floyd's killing, as Americans demand justice for Breonna Taylor, Ahmaud Arbery, and countless other black people who have been killed by police in recent years.

Public health experts have consistently cautioned that protesters should wear protective face masks while at demonstrations and should try to stay six feet away from others as much as possible to avoid spreading Covid-19.

However, public health experts have expressed support for the demonstrations, with more than 1,000 doctors, nurses, and epidemiologists saying in an open letter earlier this month that protesting racial injustice is "vital to the national public health and to the threatened health specifically of Black people in the United States."

The study released Monday follows local reports that have also suggested the protests are not responsible for widespread transmission of the coronavirus.

At testing sites set up for protesters in Minneapolis in recent weeks, only 1.8% of people have tested positive so far.

Supporters of the demonstrations pointed to the new study as evidence that diligent mask-wearing has worked in the favor of protesters and of public health.

Epidemiologist Abdul El-Sayed called the study "more evidence" that "reopening" state economies, allowing bars and restaurants to reopen in some states, and the refusal by some — including President Donald Trump — to wear face masks have done more harm to public health than the demonstrations.

Skyrocketing cases in recent days in Arizona, Florida, and other states have been linked to officials' decisions to begin reopening early and to patronage of bars and restaurants.