The move comes as a whistleblower alleges that officials killed a loan forgiveness site for being too helpful. 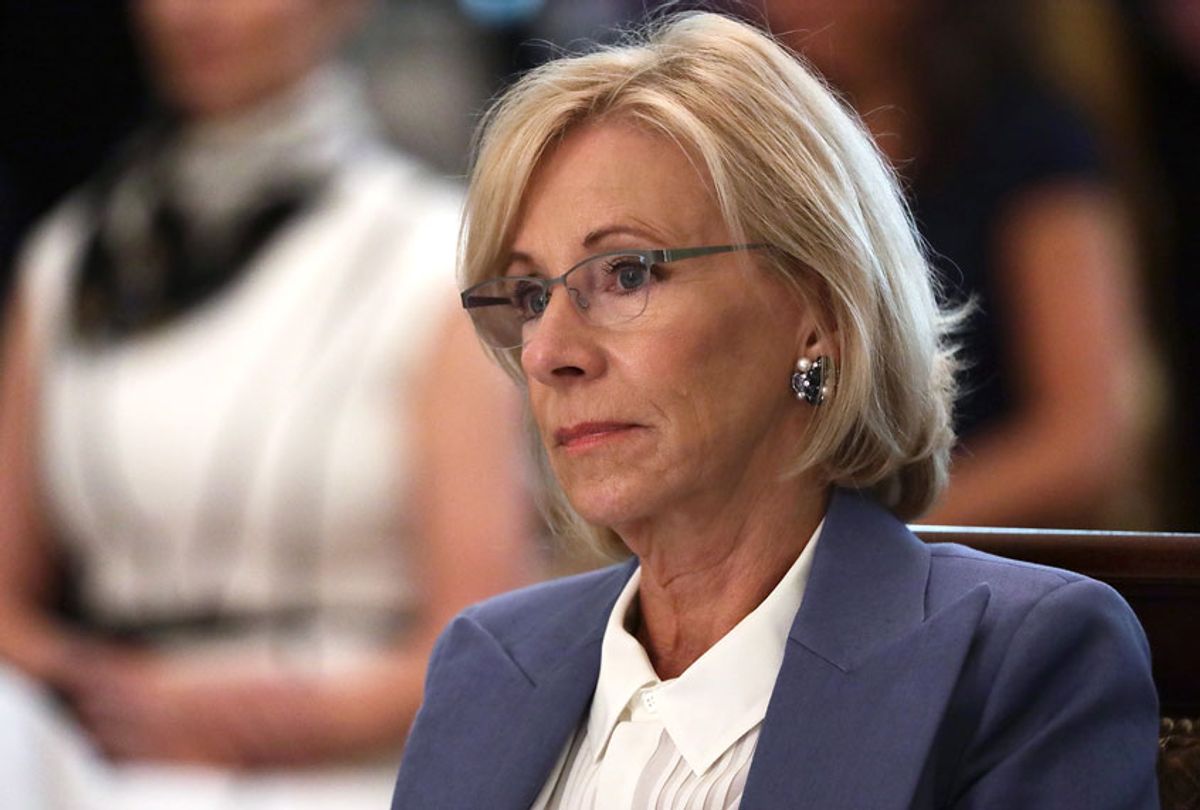 The House of Representatives failed Friday to override President Donald Trump's veto of a bipartisan bill which would have restored Obama-era regulations to the student loan borrower defense program.

Secretary of Education Betsy DeVos sought for years to dismantle the program, which offered financial relief to students deceived or defrauded by predatory institutions. A draconian rule she enacted last September rejected 95% of the first 17,000 applicants reviewed by the department.

The House and Senate issued a rare bipartisan rebuke of that rule. However, Congress could not muster enough votes to override Trump, who sided with DeVos against the majority of the legislative branch.

Friday's vote came as the Department of Education finds itself mired in settling a class-action lawsuit with a group of defrauded borrowers who successfully argued that the Trump administration illegally stonewalled nearly 200,000 pending applications for debt relief, some languishing for years.

DeVos was threatened with jail time last fall after continuing to collect student loan debts from individuals whose loans to a scandal-ridden and bankrupt for-profit college were legally voided.

The failed vote in the House also came amid new reports that the Education Department deliberately scrapped a new website designed to help student borrowers apply for loan forgiveness because the site made the process too easy, according to two whistleblower complaints.

The department's Office of Federal Student Aid (FSA) was directed to build the site as part of a big-budget effort to pull all student services into one location with a simple user interface and modern tools in order to make it easier for borrowers to access information and file for relief.

The project included information resources about the administration's new borrower defense rule, as well as legal options for students who feel predatory schools misled them, such as inflating numbers for average post-graduation earnings or employment rate.

The whistleblower, a career staffer who helped build the site, reportedly filed her first complaint after Deputy Undersecretary Diane Auer Jones, a Trump political appointee, rejected the site's new features out of hand, a move which the whistleblower understood as a deliberate effort to obstruct the project.

She reportedly filed a second complaint two weeks ago when Jones effectively scrapped the site — scheduled to go live July 1 in tandem with the administration's new borrower defense rule — because it offered students too much useful information.

Jones, rejected the site under the pretense that the content was not clear, she said.

"Diane doesn't want more people applying for it," the whistleblower claimed, according to U.S. News & World Report, which obtained a copy of the reports.

"If it was truly about the way the questions are worded, then why didn't she work with us in February to make those changes?" she asked.

The whistleblower contended that the web team was still grappling with Jones.

"The website was built in order to filter out people who don't qualify and ensure that borrowers who do qualify have the correct information to apply," she said.

To make things easier on borrowers, FSA staff worked with web developer Accenture to create auto-populating forms which would automatically load the correct application for a user and auto-fill personal details already on file.

The site would alert users to anything which might make them ineligible, as well as offer a preview of how much they might owe and what interest rates would look like under a plan.

"I am truly appalled by what the whistleblower reported, but unfortunately not very surprised — this is yet another example of the lengths that Secretary DeVos will go to deny relief to struggling student borrowers, and help predatory for-profit colleges with their bottom line," Senator Patty Murray, the Democratic ranking member on the Senate Health, Education, Labor and Pensions committee, told Salon in a statement. "This is unacceptable, and I will fight to ensure that these borrowers get the relief they are owed."

The department, however, argues that the site design had only complicated the process, and that the FSA career employees were the ones to blame for impressing their own ideological agenda.

"As for the claims about policy interference, perhaps this so-called 'whistleblower' needs to read the Higher Education Act to understand that Congress designated the policy-making function to the department — not FSA," a department spokesperson said in a statement.

Indeed, Jones has been scrutinized before, joining the department after working for years on behalf of for-profit institutions and working in the interests of predatory private institutions. She was at the front of the team which created the new borrower defense formula that spiked 95% of claims for relief.

A department spokesperson rejected the whistleblower allegations, saying in a statement that "anyone who says that there has been any effort by anyone at the department to delay or obstruct the development of a new borrower defense form or website is lying."