Bill Barr is even worse than you think: His entire job is to protect Donald Trump

Barr is the latest in a long line of bootlicking right-wing water carriers: Rich white men tell him what to do 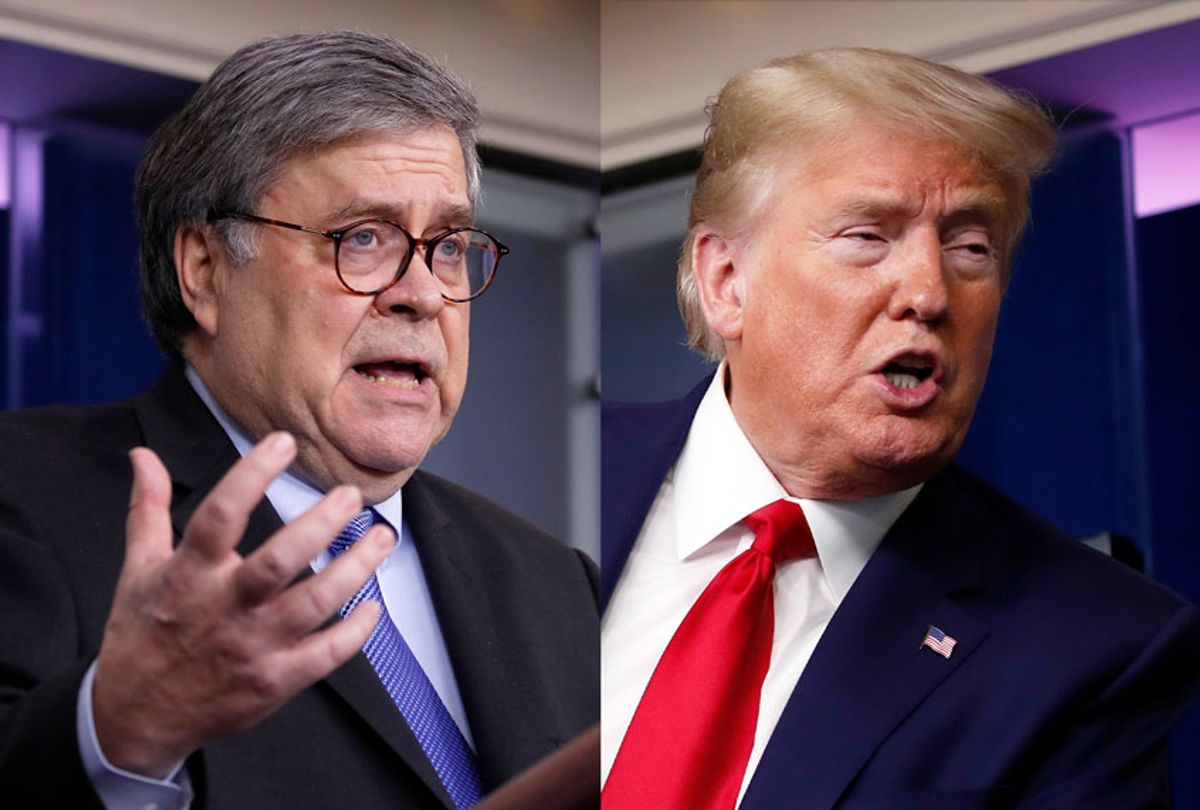 William Barr, the attorney general of the United States, is a water-carrier for the wealthy. He is only the latest in a long line, including, during my lifetime, such establishmentarian lickspittles as Dean Acheson, John J. McCloy, John Foster Dulles, Allen Dulles and Henry Kissinger.

These men, and the jobs they have carried out for the men — it is exclusively men — who own this country are part of the secret history of America. This is the way it works. The men who own most of the wealth in this country can't be bothered with the niggling little details of maintaining their power and ownership, so they reach down into petri dishes of power like Harvard and Yale, and they pluck out promising gofers and they groom them and train them to take care of all the nasty bits of maintaining power like keeping the working class and minorities in line, or fighting their wars or, if necessary, behind bars.

You think this is just fanciful lefty rhetoric, a throwback to the verbiage bandied about by groups like SDS and the Socialist Workers Party in the '60s? Let's have a look at just one of Barr's water-carrier grand-uncles, John J. McCloy, who was named as one of the "wise men" in the book with that title by authors Walter Isaacson and Evan Thomas.

McCloy was born in 1895, to an insurance salesman and a hairdresser from Philadelphia, comparatively speaking "the other side of the tracks" in early 20th-century America. He graduated from Amherst College and Harvard Law School. After service in World War I, he took jobs with two prestigious Wall Street law firms where he represented numerous American firms that did business in Nazi Germany, including with the notorious German chemical company, I.G. Farben, which manufactured Zyklon B, the gas used to kill Jews in Nazi concentration camps.

During World War II, McCloy was an undersecretary of war. He was involved in building the Pentagon and establishing the OSS, the precursor to the CIA. According to Kai Bird, who authored the definitive biography of McCloy, he was "more than any individual … responsible for the decision" to intern Japanese Americans in concentration camps during the war.

After the war, McCloy was made high commissioner for Germany and, from 1949 until 1952, he ran the American portion of occupied Germany and supervised the establishment of the German Federal Republic. Here is how McCloy repaid his corporate masters back home: He commuted the death sentences of two-thirds of the Nazi officials convicted of war crimes, and he personally ordered the freeing of convicted war criminals Friedrich Flick and Alfred Krupp, German industrialists who had helped build the Nazi war machine by working to death Jews from concentration camps as slave labor.

Why would McCloy free the Nazis responsible for so much death and destruction, including the attempt to wipe out the Jewish people of Europe? Well, he was just carrying water for his American corporate friends who had groomed him from Harvard Law for the job. Germany needed to be rebuilt in order for American corporations to pick up doing business where they had left off when the war began, and it couldn't be rebuilt without the industries owned by men like Flick and Krupp. So McCloy followed the orders he had been given by his buddies on Wall Street and set those Nazi monsters free. He also gave the OK when the first chancellor of a reconstituted Germany, Konrad Adenauer, appointed numerous Nazi war criminals and notorious anti-Semites to powerful government positions.

When he returned to the U.S. in 1952, McCloy was rewarded by being named chairman of the Chase Manhattan Bank. He became a very, very rich man. He went on to become a partner in the Wall Street law firm of Millbank, Tweed, Hadley & McCloy and succeeded Nelson Rockefeller as chairman of the Council on Foreign Relations. He remained in the bosom of the establishment until his death in 1989.

Bill Barr, currently serving as our attorney general, is McCloy's modern equivalent. You could have written Friday's New York Times headline, "Barr Pushed to Undermine New York Prosecutors From the Start" about McCloy's undermining of the Nuremberg war-crimes trials in 1949. McCloy was sent to Germany to free Nazis convicted by Nuremberg prosecutors. Barr was sent to the Justice Department to free friends of Donald Trump convicted by Robert Mueller's prosecutors.

He has gone about his job for Trump with gusto. Remember his single page "summary" of the Mueller report? Nothing to see here, folks! No collusion! No obstruction! But he wasn't finished. In March of this year, Barr dropped the charges against two shell companies that financed efforts by Russian troll farms to influence the 2016 election on behalf of Donald Trump. One of those firms was part owned by Yevgeny Prigozhin, a Russian oligarch sometimes known as "Putin's chef."

A second U.S. attorney from St. Louis, Jeffrey Jensen, was appointed by Barr to investigate the prosecution of Trump's first national security adviser, Michael Flynn. That "investigation" of the Muller investigation bore fruit. First Barr got rid of Jessie Liu, U.S. attorney for the District of Columbia, and replaced her with one of his lackeys, Timothy Shea, in an acting capacity. He quickly moved to drop all charges against Flynn, even though the former national security adviser had pled guilty to charges of lying to the FBI.

Shea then moved to reduce the sentencing recommendation for Roger Stone, notorious as Trump's first campaign manager and for his admitted connection to WikiLeaks during the 2016 campaign. This led to the resignation of the four prosecutors who had won Stone's conviction. One of them quit his job at the Department of Justice altogether. This week, a former member of the Mueller prosecution team, Aaron Zelinsky, testified before the House Judiciary Committee that there had been "heavy pressure from the highest levels of the Department of Justice" to give Stone "a break" by reducing his sentence. That pressure had come directly from Barr, Zelinsky testified.

Earlier this week, Barr finally completed the clumsy firing of Geoffrey Berman, the U.S. attorney for the Southern District of New York (himself a Trump appointee). Berman had been in charge of the prosecution and conviction of Trump's former personal lawyer, Michael Cohen. He was also investigating Trump attorney and loyalist Rudy Giuliani and had brought charges against two of Giuliani's associates in the Ukraine clusterfuck, Lev Parnas and Igor Furman. Berman had charged a Turkish bank close to Turkish President Recep Tayyip Erdogan with violating sanctions against Iran, a case that was known to have angered Trump, who had promised Erdogan he would take care of it. There is speculation that all of these prosecutions and investigations by the Southern District are now in jeopardy now that Barr has gotten rid of Berman.

So Barr has set free the Russian companies that hacked our election. He has dropped the charges against Flynn, the man who talked to Russian ambassador Sergey Kislyak about canceling sanctions imposed by the Obama administration against Russia for hacking our election. He has moved to help out Roger Stone, the man who had admitted contacts with WikiLeaks founder Julian Assange, who published the Democrats' emails which had been stolen by Russian intelligence in a naked attempt to helpTrump win the election. And he has weakened investigations and prosecutions of everyone associated with Trump's attempt to get dirt on Joe Biden by withholding military aid to Ukraine. Is there anything Barr hasn't done to discredit the Russia investigation and help Trump's re-election this year?

Well, Barr was interviewed on NPR's "Morning Edition" on Friday. Along with a specious defense of everything else he has done while acting as Trump's personal lawyer while officially serving as attorney general of the United States, Barr launched a frontal assault on mail-in ballots, alleging there was a "possibility of counterfeiting." Asked if he had any evidence that mail-in ballots could be defrauded or counterfeited, Barr said, "No, it's obvious."

Barr is just like the other sniveling water-carriers who have preceded him. He was put on the government payroll twice to serve as attorney general and do what he's told. Between times, he was made general counsel of GTE, the communications giant that merged itself into becoming Verizon and, like McCloy before him, was rewarded with millions and millions of dollars.

McCloy had the task of freeing actual Nazis after World War II. William Barr has the task of helping Donald Trump keep the American Nazis in his base happy so they'll vote for him in November. As Barr said, "It's obvious." His base is just about all Trump has left. If it includes some white supremacists and Nazis, so what? Barr will be there to carry water for them if an honest prosecutor or judge tries to send them to prison. Just ask Mike Flynn.