No dry or raw kernels here. 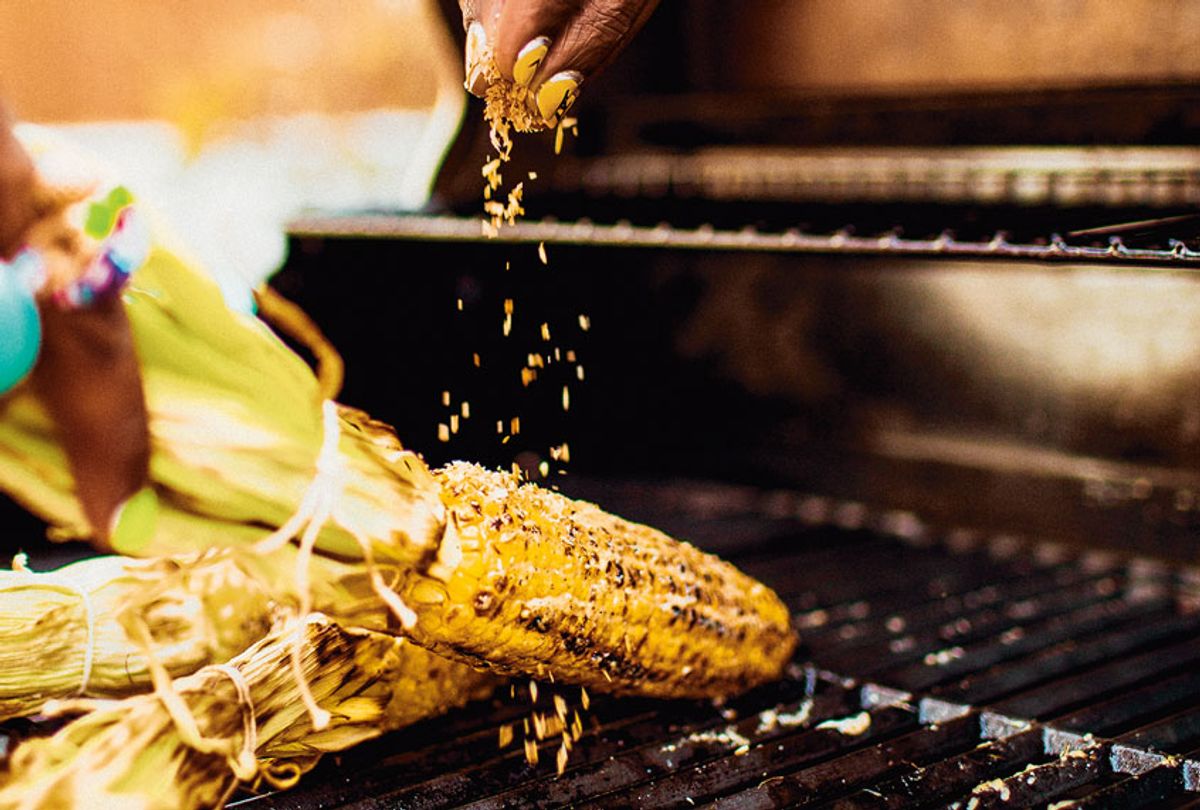 Grilling corn should be as quick and easy as just, well, throwing it on the grill. But sometimes cobs emerge dry, or raw, or dry and raw. Should you be wrapping cobs in foil? Are you too quick to strip and toss the husks? Or is it simply a matter of better timing or heat properly applied?

To answer all your questions (and then some), here's our guide on how to grill corn on the cob so that it's perfectly charred and juicy-sweet every single time. Oh, and here's a reminder on how to pick corn.

How to grill corn

Grilling calls for the application of high, dry heat—something corn on the cob, when still encased in the husk, is uniquely suited to bear. Especially when fresh, the sturdy, moist husk protects the kernels from the direct heat you need for that flavorful char, while also steaming the corn to perfect doneness. If the corn you find at the market is already husked, fear not—you can approximate that environment with foil.

1. Peel, but don't remove the husk

Gently peel to reveal the kernels, removing the silks, but leave the husk attached at the end of the cob. Brush cobs lightly with butter or oil and season as desired, then cover with the still-attached husks (or foil)—this will allow the corn to steam, while the husks char and take on smoky flavor. (You also can leave the corn peeled open, husk still attached, oiled and seasoned, and use the husk as a decorative but functional "handle" while rotating on the grill.)

2. Fire up your grill

If working with a charcoal grill, light your charcoal (a chimney starter is handy, but not at all necessary). When bricks are at least 50 percent gray and ashy, scatter over the charcoal grates and top with grilling grates. Lid the grill and let heat for 10 minutes or so, or until 450°F.

If working with an electric grill, simply light one or two zones to match the size and amount of corn you're grilling (if grilling for a crowd, you'll likely want to light the entire grill). Let preheat for 10 minutes or so, or until the interior of the grill reaches 450°F.

3. Grill until cooked through

Place the covered cobs on the grill over direct heat. Grill for 10 or so minutes, turning occasionally, until the husk is well-charred, and the kernels look opaque.

Grilling corn without husks or foil

While charred corn is tasty, dry corn is not. Cobs grilled sans husk or foil are more likely to dry out. Create two zones on the grill—direct heat and indirect heat—so you can move the corn on and off the hotter patches of the grill, allowing indirect heat to cook the cobs through.

Brush bare cobs all over with your choice of oil and seasonings.

2. Fire up the grill

Prepare your grill for two zones, direct and indirect, of heat. If working with charcoal, simply scatter the bricks on only one part of the grill; if working with electric, light just one or two sections (or every other).

3. Grill until cooked through

Place cobs over direct heat, rotating frequently (and moving to the indirect heat zone if charring too quickly), until the kernels look opaque, about 10 minutes.