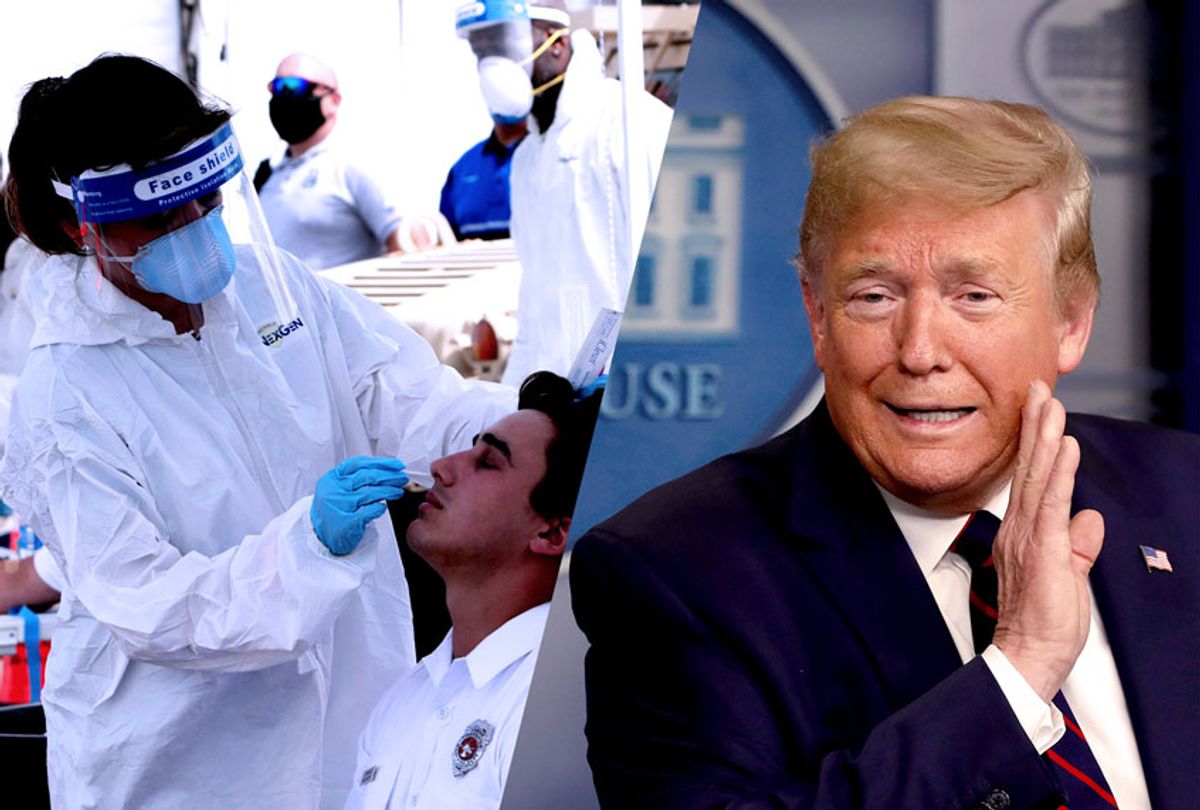 As coronavirus cases surge nationwide, some elected officials, including the president, vice president and governors of large states, have turned to statistics which obscure or minimize the degree of the problem.

They often point to one data point in particular as evidence that things aren't really as bad as they seem: the positivity rate.

The positivity rate — the percentage of tests which come back positive — is among the most complicated, and most poorly understood, measurements of infection.

Though the country might be seeing an increase in cases, if the positivity rate is dropping, that could be interpreted as a good sign: It suggests we are increasing testing capacity, because as more individuals are tested, more cases are found. If the rate is declining at the same time, then the spread might actually be under control.

Epidemiologists, however, point out that this is not necessarily true, which makes the positivity rate a convenient measure for someone seeking to justify a narrative.

For instance, Vice President Mike Pence falsely claimed at a White House coronavirus briefing on Friday that it is "almost inarguable" that the country is seeing a rise in coronavirus infections because it is testing more people.

"We want the American people to understand it's almost inarguable that more testing is generating more cases," he said. "To one extent or another, the volume of new cases coming in is a reflection of a great success in expanding testing across the country."

But this has not been true in other countries.

The White House immediately walked back the explosive confession, reassuring the public that the president had only been joking.

"Come on now, that was tongue in cheek," economic adviser Peter Navarro told CNN's Jake Tapper the following morning. "That was a light moment for him at a rally."

However, epidemiologists point out that there's a major difference between testing more individuals and testing the right individuals.

"For argument's sake, testing should be showing a low instance of positives if you're doing a good job," Dr. Albert Ko, department chair and professor of epidemiology and of medicine at the Yale School of Public Health, told Salon in an interview.

"If you do see a rise in infection rates, that's meaningful," he said. "That means you're detecting signal, but that falls apart if you're not testing the right people."

Ko explained that different parts of the country not only have different testing capacities, but they can also vary wildly in terms of population and population density.

"On Worldometer.com, you can look at the states with highest tests per capita. You've got states like Rhode Island, where the number is very high, but then you have Idaho or Colorado, which have some of the least," he said. "There's five-fold less testing capacity, but those states also have less dense expanses where the outbreak might not have reached."

Michael Mina, professor of epidemiology at Harvard's T.H. Chan school of Public Health told Salon that when you mix together all of the testing data for the country or for a state, it gets smoothed out, or homogenized.

"If you look at testing over a large geographical area, even the positivity rate, then that can obscure the actual results," he said. "You won't get a true sense of the numbers and extent of the virus."

"You want to test in as geographically isolated locations as possible," Mina continued. "Taking from top down or ground up. One single number for the country or for a state could be misleading. I want data as localized as possible."

Ko also made a similar observation.

For this reason, the national positivity rate is essentially a useless metric, according to Ko. And many states, such as California, Illinois and Texas, appear as microcosms of the country: They have large populations, but those populations are distributed unequally.

"You not only have to test enough but focus your testing in communities where transmission is the greatest," Ko added.

As testing increases in such states, statewide positive rates might appear as if they are declining, but that could obscure where serious outbreaks are occurring in cities and communities, which would then spread out over time, forcing the state to shut down again.

The lesson in Texas this week is a prime example.

When Texas first began reopening in May, the statewide positivity rate stayed fairly low as testing expanded. In such a geographically sprawling state, that was an agreeable statewide metric for Republican governor Greg Abbott, who had called it "one of the most important data points" to encourage reopening amid political pressure. An audio recording captured Abbott saying in private that the move "will lead to an increase in spread."

"Anything below 7.2% is going to be a good number," Abbott had said at a May press conference. "If the positivity test rate is more than 10%, that's one of those red flags that we begin to look at."

After a few weeks of increased social activity, the positivity rate began to trend upward in densely populated cities such as Houston, Dallas and Austin. Abbott did not move until the state data eventually the spike. When it exceeded Abbott's "red flag" level last week, the governor announced that the coronavirus was spreading at "an unacceptable rate" and "must be corralled."

"If you look at the growth or even the decline in the number of people who were testing positive, as well as the positivity rate all the way through the early part of May, Texas was moving in a very productive position," Abbott said on Monday. "Then, around the time of Memorial Day, there was an increase, and that increase has maintained for several weeks now, necessitating that next steps be taken."

Abbott tightened several restrictions eased by the state beginning on April 30, reinstating shutdowns for all bars and river rafting areas and reducing restaurant max capacities to 50%.

The same story played out in Florida, where after weeks of denial during an upward creep in localized, densely populated areas, Republican governor Rick DeSantis also finally had to address reality on the ground this week, citing the statewide positivity rate.

"Clearly you're seeing this, this is real," DeSantis said at a Tuesday press conference. "Now they are testing more than they were for sure, but they're also testing positive at a higher rate than they were before. And so that would tell you there's probably been an escalation and transmission over the last seven to 10 days."

However, there is also a problematic side of localized data. And Texas reflects this, too.

A map of per-capita rates broken down by county actually makes it appear as if the most alarming trends are in rural, less dense areas. An outbreak at an Amarillo meatpacking plant, for instance, makes it appear as if two panhandle counties are far worse hotspots than Houston. And Brewster County, the state's largest by area, also appears to have a far more severe problem than Houston, even though rural, sparse Brewster has 85 cases total.

However, the Houston area is now one of the worst-hit spots in the country.

Testing can also reflect socioeconomic disparities, and the disproportionate toll the virus takes on underserved communities.

"It doesn't make sense to put all your testing in the richest counties," Ko pointed out. "We know the highest burden is in our cities, where the population density is greatest, particularly among our poorest populations. But the testing doesn't reach or cover where transmissions are occurring, particularly in our underserved communities. This is what we call 'heterogeneity.'"

"We need to be cognizant if we're missing full groups of people," he continued. "Surely across the country we're missing some, but we are still limited."

But it is also possible that high local numbers could indicate that those areas are not testing enough of the population, according to Ko.

In the end, the ease with which data can be arranged and cherrypicked, coupled with the country's failures to test and educate from the outset, makes Ko lean towards dismissing all news reports about data out of hand.

"We were so ill prepared from the beginning that cases aren't a good reflection of the burden," Ko said. "Unfortunately, now we have to use other measures that might lag behind but give a better idea of the full picture, such as hospitalizations or deaths."

"The more telling figure is deaths per capita," he said.

The coronavirus has infected at least 2,480,000 people and killed at least 125,000 in the U.S., according to the most recent data from Johns Hopkins University.