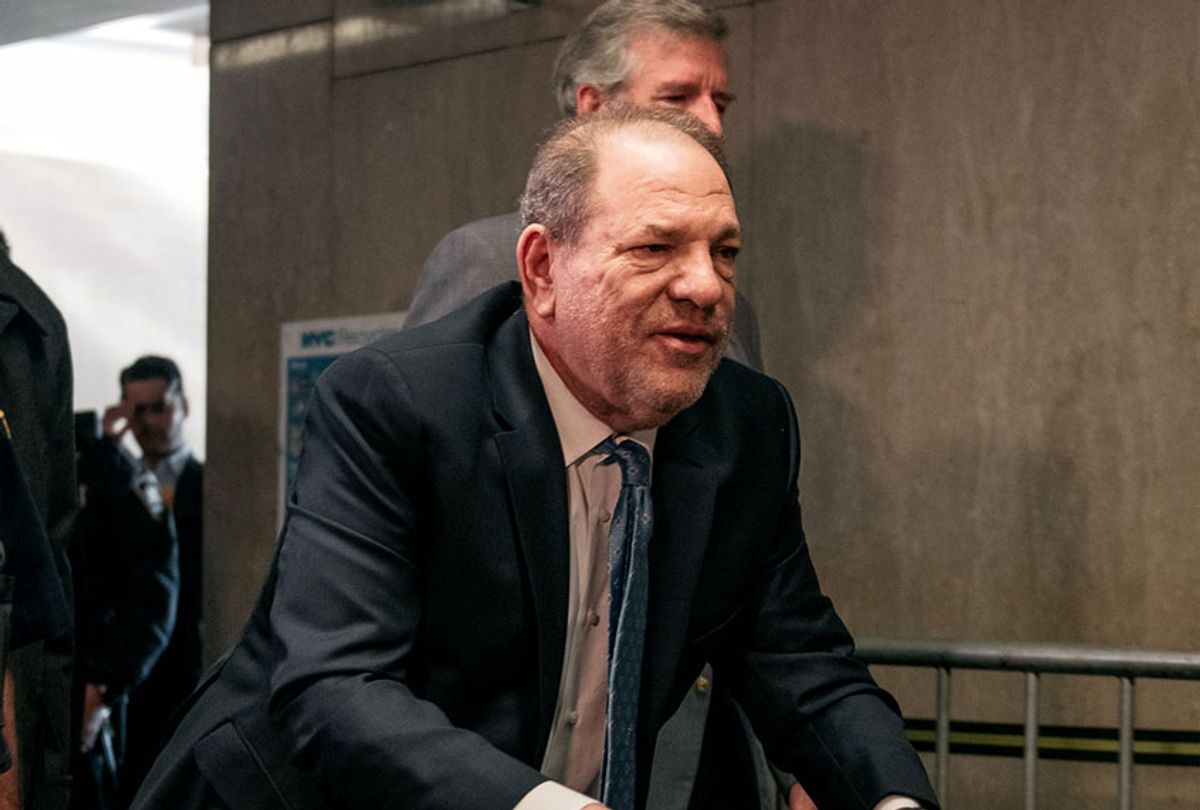 The Harvey Weinstein survivors who experienced sexual misconduct and harassment by the now-convicted rapist have been awarded a $18.875 million settlement, as part of a class-action lawsuit, aided by the New York Attorney General.

The payments, which still await approval by the bankruptcy and district courts, will resolve two separate lawsuits — one against Weinstein, Bob Weinstein and The Weinstein Company, which was filed in Feb. 2018 by the office of the Attorney General, and a separate Nov. 2017 class action lawsuit brought on behalf of the group of women who were sexually harassed and assaulted by the former movie mogul.

The settlement comes as Weinstein is serving his 23-year sentence in a New York prison, three months after he was sentenced and found guilty by a jury for the sexual assault of Miriam Haley, a former "Project Runway" production assistant, and rape in the third degree of former actress, Jessica Mann.

None of the plaintiffs included in the settlement were part of Weinstein's New York criminal trial, showing the far-reaching magnitude of Weinstein's abuse. Only six women were able to testify in the New York trial, but more than 100 women have accused Weinstein of sexual harassment, assault and rape. Louisette Geiss, Sarah Ann Thomas, Melissa Thompson, Melissa Sagemiller, Nannette May, Katherine Kendall, Caitlin Dulany, Larissa Gomes and a Jill Doe are the plaintiffs named.

Should the payment be approved by the court, the settlement will create a victims' fund allowing all the women who were abused by Weinstein, under certain circumstances, to make claims for damages confidentially.

"Harvey Weinstein and The Weinstein Company failed their female employees. After all the harassment, threats and discrimination, these survivors are finally receiving some justice," said Attorney General Letitia James. "For more than two years, my office has fought tirelessly in the pursuit of justice for the women whose lives were upended by Harvey Weinstein. This agreement is a win for every woman who has experienced sexual harassment, discrimination, intimidation or retaliation by her employer. I thank the brave women who came forward to share their stories with my office. I will forever carry their stories in my heart and never stop fighting for the right of every single person to be able to work harassment-free."

The office of the New York Attorney General had filed a 38-page complaint in Feb. 2018, which was the result of a four-month probe that detailed a culture of a hostile work environment and intimidation at The Weinstein Company. The company was accused of violating gender discrimination laws with the lawsuit stating that it "repeatedly and persistently treated female employees less well than male employees through gender-based, hostile workplace harassment, quid pro quo harassment and discrimination."

The Nov. 2017 civil case was led by FeganScott LLP and Hagens Berman Sobol Shapiro LLP, which alleged Weinstein was a serial sexual harasser and abuser. The lawsuit also named the various companies and executives with whom Weinstein was affiliated for failing to stop or prevent his actions that were in violation of federal and state laws.

Dulany, who was assaulted by Weinstein at the Cannes Film Festival in 1996, has become a leading voice among the Silence Breakers, a group of women who have come forward with allegations against Weinstein to speak out against the systems of power that enable abusive behavior.

"When I came forward and shared my story about the assault, I knew there wouldn't be a straight path to justice," Dulany said in a statement. "Harvey avoided accountability for decades, leveraging his power to hide behind a web of deceit, and I was determined to join the class action to ensure meaningful change for all survivors. I am proud that this settlement will help so many women who are long overdue for justice and relief."

"I stepped up publicly because I could not allow Harvey Weinstein to deny the truth and continue abusing women," said Geiss, one of the plaintiffs, who met Weinstein at the Sundance Film Festival in 2008, where she alleges he masturbated in front of her while restraining her in an isolated location. "A criminal case was not on the table for most of us, but we wanted to take a stand."

In a statement released by the New York Attorney General's office, Geiss spoke about the "trail of trauma" Weinstein left for women with career aspirations and dreams that were crushed by the former movie mogul. She said building the survivors' fund was not easy, but was of the utmost importance. "This important act of solidarity allowed us to use our collective voice to help those who had been silenced and to give back to the many, many survivors who lost their careers and more. There is no amount of money that can make up for this injustice, but I'm extremely proud of what we've accomplished today."

Weinstein still awaits trial in Los Angeles, where he faces up to 32 years in prison for five charges, although the extradition process has been delayed, due to the impact of coronavirus on the courts' processing paperwork.

Last month, Weinstein was hit with a new lawsuit that claims he raped four additional women, one of whom was just 17 years old, at the time.

In response to the proposed settlement, attorneys Douglas Wigdor and Kevin Mintzer released a statement condemning the settlement as a "complete sellout" of the women who want Weinstein to be held accountable for his actions. The attorneys represent Tarale Wulff, who testified in the New York trial; Weinstein's former assistants Rowena Chiu and Zelda Perkins, who recently spoke to Variety about the dangers of the NDAs; and accusers Wedil David; Dominique Huett; and Kaja Sokola, who sued Weinstein for assault when she was 16-years old.

"The proposed settlement is a complete sellout of the Weinstein survivors and we are surprised that the Attorney General could somehow boast about a proposal that fails on so many different levels," Wigdor and Mintzer said in a statement. "While we do not begrudge any survivor who truly wants to participate in this deal, as we understand the proposed agreement, it is deeply unfair for many reasons. First, Harvey Weinstein accepts no responsibility for his actions. Second, Harvey Weinstein isn't paying any money toward the settlement despite now having been found guilty in Manhattan criminal court. Third, the director defendants, who we allege had knowledge of Weinstein's behavior, will be receiving millions of dollars to reimburse their defense costs. Fourth, if this settlement were approved by the courts, survivors who do not wish to participate in the settlement but would prefer instead to hold Harvey Weinstein accountable, will be unable to pursue the multi-billion dollar insurance companies and the directors because they will receive legal releases. And fifth, the class action lawyers will be seeking millions of dollars in fees for an objectively unsuccessful result. We are completely astounded that the Attorney General is taking a victory lap for this unfair and inequitable proposal, and on behalf of our clients, we will be vigorously objecting in court."

An attorney working with Weinstein also responded to the news of the settlement.

"With closure in sight on one front, Mr. Weinstein remains intently focused in defending himself on all remaining legal matters, including the appeal of his criminal conviction, civil lawsuits, and the charges filed against him in LA," attorney Imran Ansari said in a statement to Variety. "He continues to pursue all legal recourse available to him and remains steadfast in the defense of those matters."