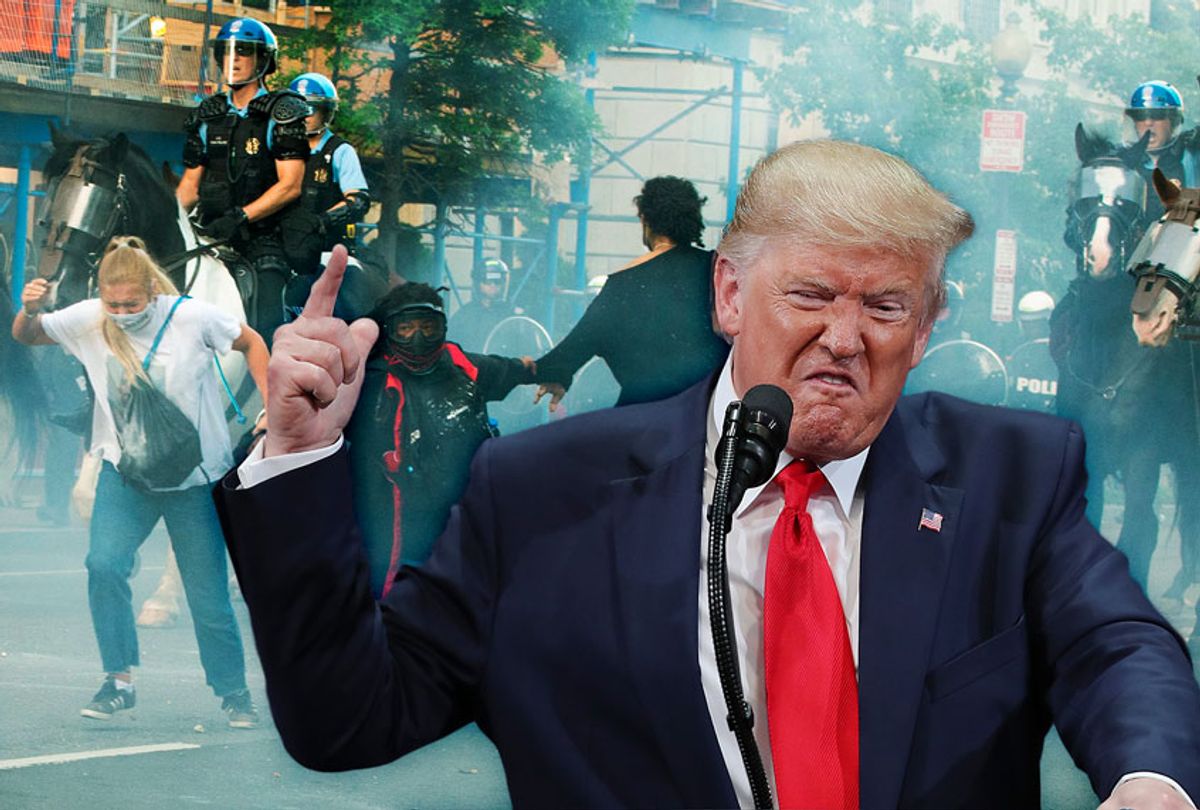 Last week, I walked over to Black Lives Matter Plaza in front of the White House to clear my head and draw some inspiration. When I arrived at the north end of the square, the line of people waiting to climb up a stepladder so they could get a better picture of "Black Lives Matter" painted on the street in bright yellow letters heartened me. They were so obviously proud and energized by DC Mayor Muriel Bowser's act of defiance against Donald Trump itself, but also I expect by what that act represented: The people still own this nation and still have power to move it where it needs to go.

I made my way south towards the White House to drink in the atmosphere.  When I got to the corner of 16th Street and Pennsylvania Avenue (where Trump's Bible fiasco played out), I came upon a scene that spoke volumes about where we are as a nation and where Trumpism is as a force. Approximately 20 shirtless, apparently impaired white supremacists were lurching back and forth between the encamped BLM supporters and a cordon of DC police — attempting to provoke either or both parties into a Fox News-ready response.

This group was the most pathetic collection of human beings I have ever encountered in my sixty years on this earth. They made me ashamed to be an American, just like Trump has succeeded in making me feel totally differently about the flag and even the word "American." And I say this as a veteran, a retired career government official and someone who used to tear up at the national anthem as a young boy.

When you connect the fact that this pitiful group of fascist provocateurs was the best that this movement could get in front of the President's own home to Trump's Tulsa rally debacle, his obvious fatigue and dejection after the event, recent Supreme Court rulings rebuking his regime and pushback from government officials, it's fairly clear that Trumpism has passed its high-water mark and is rapidly declining.

Contrast that with the positive energy that gave us Black Lives Matter Plaza and you might conclude that barring some unforeseeable game-changer emerging this summer, the Republicans are going to lose big time in the 2020 elections, and even if Trump, Barr and McConnell attempt a coup to remain in power they will be thwarted. They know it – or at least feel it – themselves.

But let's be sober about what the fight ahead of us looks like.  Germany was all but defeated in the spring of 1945, but thousands of Americans still lost their lives to a dedicated group of fanatical German soldiers – a mix of old men and young boys. Following the American Civil War, the South turned decisive battlefield defeat into an insurgency that lasts to this day in some form. Black Americans have paid a disproportionate price of permitting this for 150 years, and what we are experiencing today is a direct outgrowth of that failure to reinforce the Union's victory.

What was the difference between Germany and the Confederacy?  The Allies pursued de-Nazification vigorously if imperfectly, and we "softly" occupied Germany for 45 years (until the end of the Cold War). Conversely, after the half-hearted Reconstruction program, we let the Southern states resume governing themselves while we rapidly got the economy back up and running (sound familiar?) in the North.

Trump and his supporters are going to go down swinging after the Elections. Or maybe I should say, "shooting."  They're not going to walk away from 400 years of cultural instinct and material advantage because 'snowflakes' outvoted them.

Trump's dismal poll numbers are just starting to register broadly with Republicans, and we're already seeing white supremacist terror attacks by the Boogaloo Bois and other groups, massive voter suppression efforts from state government officials, the demonization of Democrats and delegitimization of peaceful protesters and the ginning up of a coordinated propaganda campaign of fear that that makes the Willie Horton ads that sank Michael Dukakis's candidacy 30 years ago look like child's play.

That said, America can't go back to business as usual after we stave off a potential Trumpian coup.  If Democrats manage to sweep the 2020 elections, progressives need to "occupy" the American information and political battle-spaces, reform the police and secure justice and equal access for all citizens. Most importantly, we will need to remain vigilant, and continue to stamp out and suppress all anti-democratic ideologies and movements.  We forced the Germans to adopt a law that specifically outlaws the use of symbols of fascism – one that has been applied quite broadly and effectively. I am saddened and ashamed to admit this, but we need such a law in the U.S.

Like Abraham Lincoln, I do fondly hope and fervently pray that this mighty scourge may speedily pass away.  But as he also knew, hope and prayer must be augmented by decisive action.  Let us seize the tremendous, and undeserved, opportunity presented to us by our fellow African-American citizens, eject the cancer of Trumpism from the body politic, and, as Lincoln said in his second Inaugural Address, "strive on to finish the work we are in; to bind up the nation's wounds; to care for him who shall have borne the battle, and for his widow, and his orphan — to do all which may achieve and cherish a just, and a lasting peace, among ourselves, and with all nations."

Or reap the whirlwind.

Mark Hill is a career U.S. Intelligence Officer and former National Security Senior Executive, and Chief Innovation Officer of Revelatur, Inc., a progress accelerator whose mission is to measurably advance Democracy in the United States and globally.