Dawn Porter's film doesn't just document the Congressman's good works, but humanizes him as a man of joy and hope 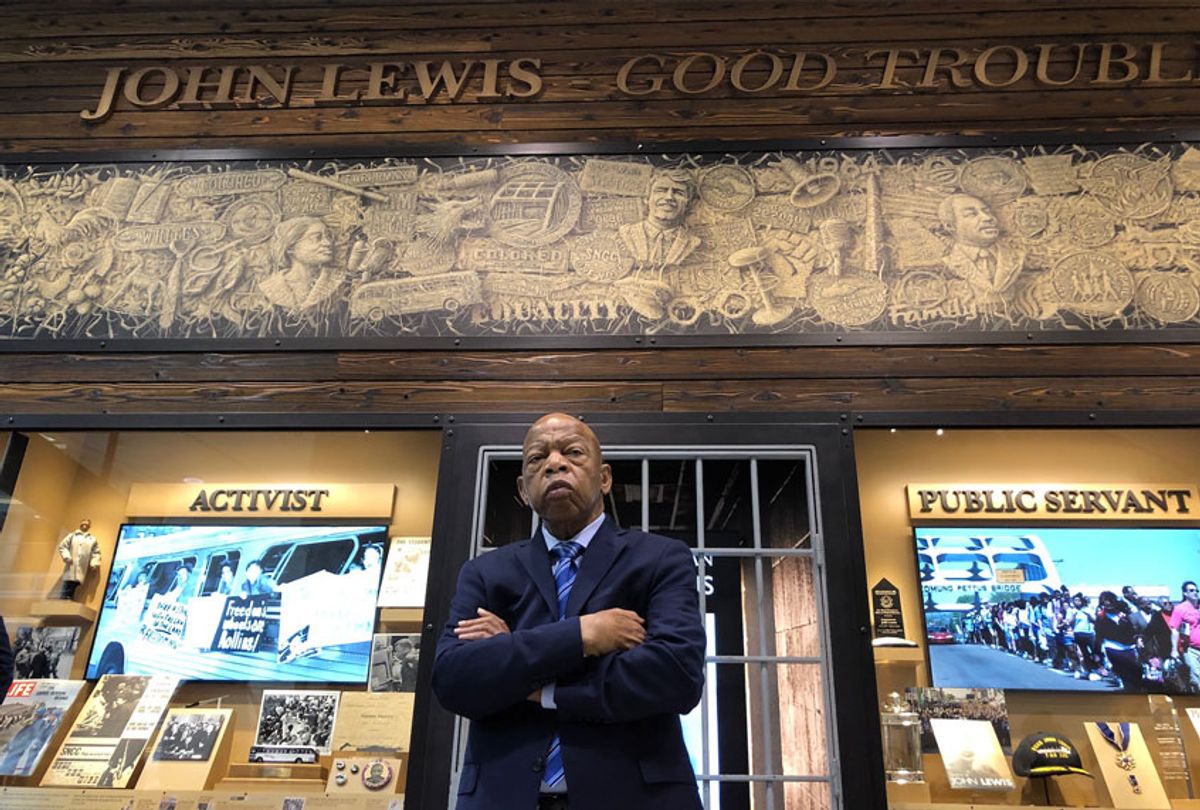 John Lewis is a man of herculean determination. His leadership, faith, and sense of humor are all put on display in Dawn Porter's powerful and timely documentary "John Lewis: Good Trouble." The film documents the life of a politician and civil rights leader who has never lost sight of his purpose even when faced with insurmountable odds. The title of the film comes from some advice Lewis likes to give: "When you see something that's not right, not fine, say something, do something. Get in trouble: good trouble, necessary trouble." He certainly knows what this means. He has led and participated in thousands of protests, been arrested over 40 times, and spent 33 years in Congress.

"Good Trouble" begins by tracing his footsteps growing up in Troy, Ala., where he was born on February 21, 1940, the third of 10 children to a sharecropping family. He grew up during a time when his place in life was defined by the margins of the color line and signs that read White and Colored that provoked him to commit to defending basic human rights. Porter uses a combination of archival news footage, old photographs, and talking-head interviews to accurately portray the arc of who he is. It's a treasure trove of footage, and Lewis admits to the camera that it's his first time seeing a lot of it.

He was 15 when he first heard Rev. Martin Luther King's sermon titled, "Paul's Letter to American Christians," on the radio. Inspired by the words of King, and Rosa Parks' bold refusal to sit at the back of the bus, he found purpose in working to be a part of this change despite his parent's instruction: "Don't get in trouble. Don't get in the way." However, he was 19 when he first came into this work as a freedom fighter, walking alongside and learning from King's leadership.

Porter extracts eye-opening footage from his time leading the first sit-ins to integrate lunch counters in the South. We learn he was the last one of the original Freedom Riders, protesting segregation on public buses and bus terminals. At 23 years old Lewis was the youngest speaker at the 1963 March on Washington, quickly followed by registering, and educating Black voters in Mississippi for Freedom Summer, getting brutalized during the Selma to Montogomery marches led by Martin Luther King, Jr., and becoming chairman of the Student Nonviolent Coordinating Committee. In November of 1987, he was elected to Congress. Now, he's 80 and battling stage 4 pancreatic cancer, but he remains undefeated as he continues to serve his 17th term in the U.S. Congress, and is up for re-election this year.

Most civil rights documentaries spend an immense amount of time painting this picture of noblemen in suit jackets on the frontlines, organizing in churches, and making preachy speeches to a congregation, almost appearing standoffish and heaped in respectability politics. However, here we're introduced to not just John Lewis the politician, but John Lewis the man. He has a scowling demeanor; however, when he smiles it's electric. His presence is one that is felt in any room that he enters as the film so carefully documents. There's footage of him dancing to Pharrell Williams', "Happy," while campaigning for his party's gubernatorial candidate Stacey Abrams in 2018. Moments like this allow us to relish in his relatability and aspire to not just learn from him, but to be fearlessly optimistic despite circumstances.

There's footage of him giving a tour of his home, where he shows off the art collection he started with his late wife, Lillian Miles. There's a wooden birdcage with chicken figurines, an ode to where he came from, and the evolution of his ambition. As a child, he wanted to be a minister and would pretend he was preaching to a congregation of chickens, a story he jokingly recounts often. Although he may maintain all seriousness in his tireless pursuit, we get the sense that he has chosen not to lose himself in this work.

Lewis went from fighting for the right to vote to seeing the election of the first Black president, and now the undoing of Barack Obama's legacy by Donald Trump, whom he reportedly believes is the worst president for civil rights in his lifetime. In 2013, he watched the legendary Voting Rights Act of 1965 dismantled by freeing nine states namely in the south to change their election laws without federal approval. This resulted in the redrawing of district lines in many states, a reduced number of polling locations, and stricter voter-ID laws, nearly undoing much of the work Lewis almost gave his life for. While the documentary doesn't spend much time addressing his re-election, it provides more than enough context to the gravitas of his work to ensure that Black people were allowed to vote.

"One of my greatest fears," he says, "is one day we wake up and our democracy is gone." The film serves as a timely fixture in our current socio-political climate. Over the last couple of weeks, the resurgence of the Black Lives Matter movement has become a global fight. While exhaustive, it's a bit different this time around; there is a piercing sense of hope that we're getting somewhere. The Civil Rights Movement of the '50s and '60s began this work, but it's up to this generation to continue onward. The final scene of the documentary shows Lewis giving a speech we've heard him make before: "We will create the beloved community. We will get there. I still believe we shall overcome."

The film allows us to consider how we will show up to the frontlines in whatever jobs or roles we occupy. There's a lot to glean from the battleground Lewis has stood on for six decades while demanding fairness, a hope, and dream, of every American. "Good Trouble" is of importance now more than ever.

Good Trouble: John Lewis by Magnolia Pictures and Participant is in select theaters and available on demand.