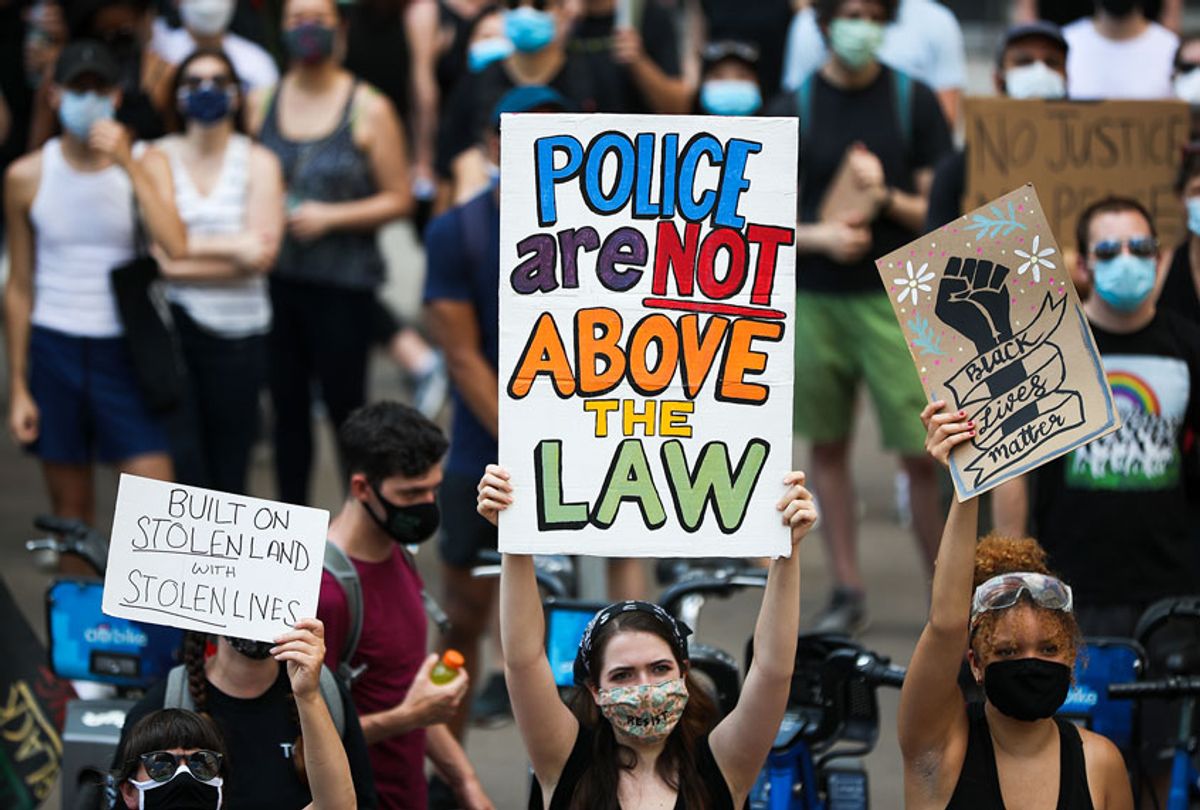 A crowd of peaceful protesters rallied outside a New York police headquarters Monday after a video appeared to show a Schenectady officer kneeling on a man's neck prior who was later taken into custody.

The video shows the officer kneeling on 31-year-old Yugeshwar Gaindarpersaud outside of his home on Monday, according to the Albany Times-Union.

It was recorded by his father, Jaindra Gaindarpersaud, who can be heard pleading with the officer to stop on the tape.

"What has he done to you?" the father yells as the officer appears to lodge his knee into his son's head.

The officer can be heard demanding that the father "back up" and "go back inside."

The father and son later joined protesters outside the Schenectady police headquarters. Jaindra Gaindarpersaud told the crowd that the officer came into their backyard and confronted his son, prompting the struggle. He further alleged that the officer responded to his pleas by jamming his knee into his son's head even harder.

"When I see that . . . George Floyd comes to my mind," he said. "This officer has no sympathy. We don't need officers like this. We need officers to protect us — not to kill us, and they kill many people already and they're still trying. This has to stop."

He alleged that the officer came onto his property without a warrant and "harassed" him, as well as that he lost consciousness during the struggle.

He alleged that he did not wake up until he got to a hospital.

"If he had me like five more minutes on the ground I would be gone," he added.

Schenectady Police Chief Eric Clifford drew praise after the protests over Floyd's death after he kneeled in solidarity with protesters and marched alongside them.

Clifford did not respond to questions from reporters. Odo Butler, the head of the Schenectady branch of the NAACP, told The Times-Union that Clifford said "Gaindarpersaud was drunk and not complying" with commands.

The Schenectady Police Department said it was investigating the incident. Police said they were called for a complaint that tires were slashed as part of an ongoing neighbor dispute. They claim that the suspect fled on foot and the struggle ensued after the officer caught him.

"The department has been made aware of a video circulating on social media partially depicting the incident. The incident in its entirety is currently being reviewed by the Schenectady Police Department's Office of Professional Standards. We ask that anyone who witnessed the incident or has video footage to contact the Office of Professional Standards," the department said in a statement. "The Schenectady Police Department is committed to fair, impartial and transparent investigations.  As soon as the investigation has concluded or more information can be released in regards to the incident, it will be made available."

"The Schenectady NAACP stands against the use of excessive force and tactics that cause extreme physical harm or death by the Schenectady Police Department and all law enforcement," Butler said in a statement. "We demand that all citizens be treated equally regardless of their race or ethnicity. We are in a critical time, and any inexcusable behavior by law enforcement must be addressed immediately."

The officer is not being named at this time, police said.

"I need justice," Yugeshwar Gaindarpersaud told WRGB. "He needs to get fired.