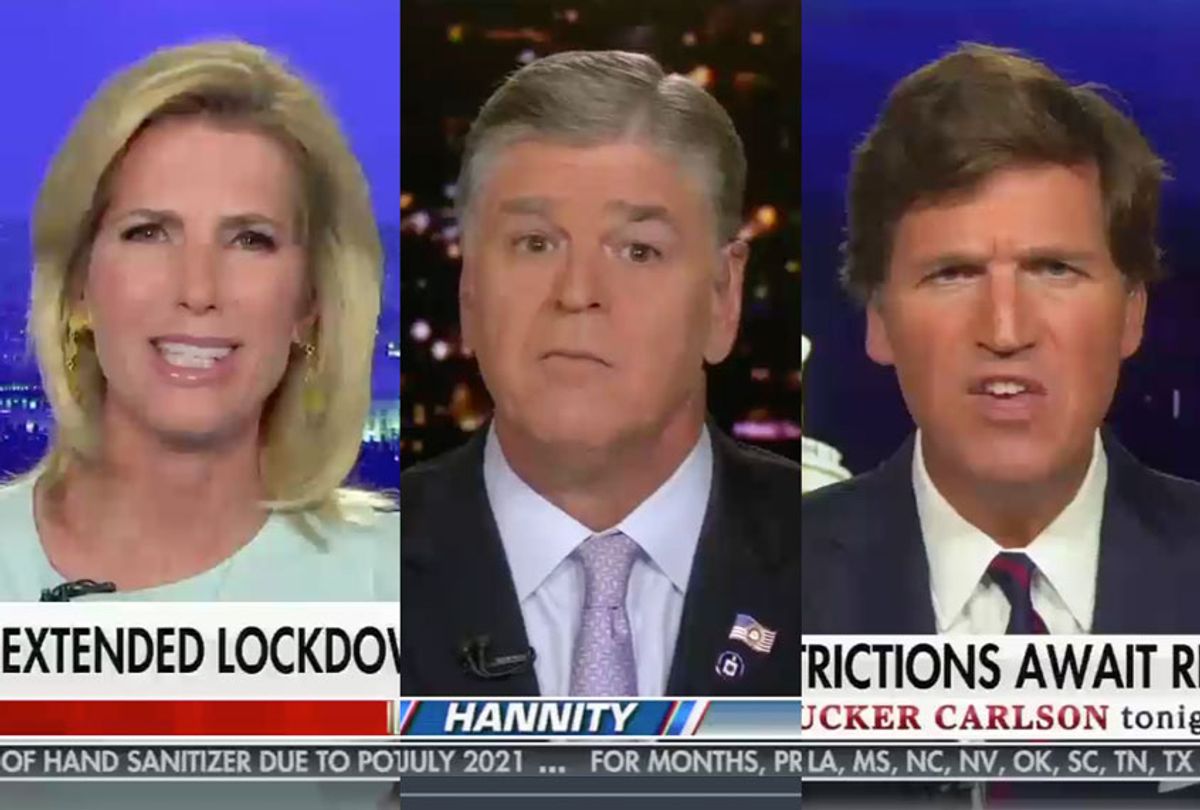 As coronavirus cases and hospitalizations surge nationwide, Fox News opinion hosts have downplayed the severity of the spike and pushed dangerous misinformation about preventative and safety measures used to combat the pandemic, such as the use of face masks and social distancing.

The conservative channel came under fire early in the pandemic for playing down the magnitude of the threat, including comparisons to the seasonal flu. Fox News previously insisted to Salon that its programming also included segments which relayed the threat posed by the new coronavirus. Primetime host Tucker Carlson had long sounded the alarm about the dangers of the pandemic, the network argued.

But while Carlson "received plaudits in March for forcing [President Donald] Trump to take the coronavirus seriously," he has since "sung the exact opposite tune on the pandemic," The Daily Beast reported. Carlson and his guests have repeatedly pushed the idea that the U.S. coronavirus death toll is "inflated and possibly a hoax." The numbers of human lives lost now totals more than 130,000.

Carlson's show veered into even more dangerous misinformation on Tuesday when the Fox News host falsely claimed that there was no scientific basis for the use of masks and social distancing to combat the spread of the virus. Carlson is a political commentator with no background in medicine.

"Many schools that do plan to reopen will do so under a series of restrictions that have no basis of any kind in science. It's kind of a bizarre health theater," he said. "Students will be kept six feet apart. Everyone will have to wear a mask. Class sizes will be limited."

This is simply not true. An analysis of 172 studies on coronavirus interventions found that "mask wearing significantly reduces the risk of viral transmission." Numerous studies have also demonstrated the "effectiveness of physical distancing."

Carlson, of course, knows this as well as anyone.

"Of course, masks work. Everyone knows that," he said, correctly, back in March. "Dozens of research papers have proved it. In South Korea, Japan, Hong Kong, the rest of Asia — where coronavirus has been kept under control — masks were key."

Yale epidemiologist Gregg Gonsalves expressed concern that Carlson was "peddling pseudo-science and dangerous mis-information" as cases rise around the country.

"Everyone on the board of the Fox Corporation, all the executives at Fox News are complicit in this," he tweeted. "He's either stupid, crazy or both. This is just garbage spewed out to millions that will endanger lives."

Fellow host Sean Hannity, who has urged viewers to wear masks on his show, released a PSA saying he does not "have a problem wearing a mask" to "defend grandma."

Steve Doocy, the co-host of Trump's favorite morning show "Fox & Friends," also urged the president to wear a mask as a "powerful symbol" to encourage his supporters to "slow down the spread of this thing."

But Hannity and fellow Fox News hosts also sought to downplay the rise in infections as the country hit a new record Tuesday, with 60,000 new confirmed cases.

Hannity attempted to play down the surge in infections and hospitalizations in Florida by arguing that the increase was "happening among younger people."

Hannity also recently hosted Trump for a softball interview, where the president declared that the virus is "fading away" when the exact opposite is true.

"I would not be surprised if we go up to 100,000 a day if this does not turn around," Dr. Anthony Fauci, the head of the National Institute of Allergy and Infectious Diseases testified to Congress last week.

And Hannity insisted last month that it was "wrong, wrong, wrong" to shut the country down in order to slow the spread of the virus.

Host Laura Ingraham dismissed the recent infection spike by claiming that "Democrats" were expressing concern about the infection rates to damage the "Trump [economic] recovery."

Ingraham hosted a guest last month who repeated the myth that the coronavirus is just an "influenza-like illness" and argued that the recent rise affecting a younger population "might not matter that much."

Studies examining the role that Fox News played early in the pandemic highlight the dangers of the misinformation spread on the nation's highest-rated cable news network.

A Fox News spokesperson disputed both studies and argued that Hannity made "repeated, specific warnings" about the virus starting in January. But a March poll found that Fox News viewers were more likely to believe the virus was exaggerated, and an April poll found that Fox viewers were more likely to believe misinformation about the origin of the virus and when a vaccine might become available.

These research efforts "put numerical weight . . . behind what many suspected all along: Americans who relied on Fox News, or similar right-wing sources, were duped as coronavirus began its spread," Washington Post media columnist Margaret Sullivan wrote. "Those who relied on Fox or, say, radio personality Rush Limbaugh, came to believe that vitamin C was a possible remedy, that the Chinese government created the virus in a lab and that government health agencies were exaggerating the dangers in the hopes of damaging Trump politically."

"We are receiving an incredible number of studies and solid data showing that consuming far-right media and social media content was strongly associated with low concern about the virus at the onset of the pandemic," Irene Pasquetto, the head of the Harvard Kennedy School Misinformation Review, told The Post. "Empirical evidence clearly shows that this social group tended to take the disease less seriously and delayed their own response to the virus."