How bad could a second term really be? Think Donald Trump 2: Police-state boogaloo

Trump has made his second-term agenda clear: Crush his enemies — and he doesn't just mean Muslims and immigrants 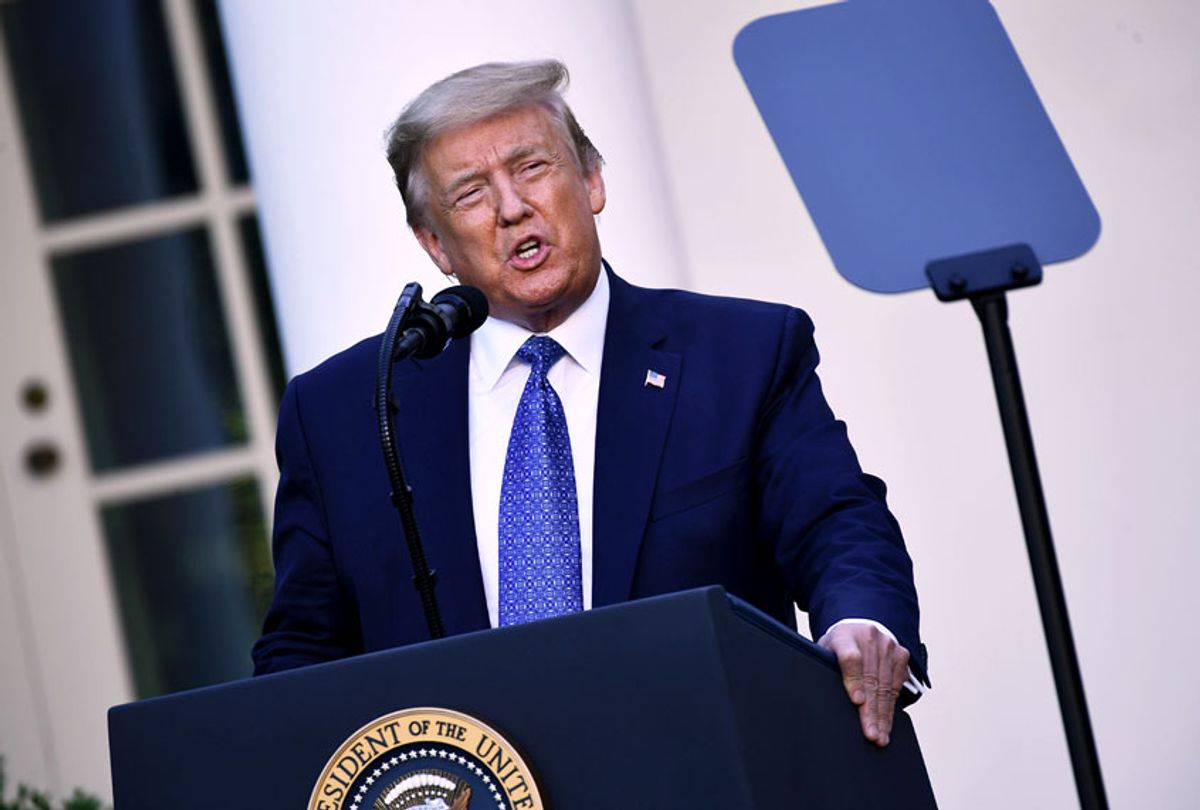 US President Donald Trump delivers remarks in front of the media in the Rose Garden of the White House in Washington, DC on June 1, 2020. (BRENDAN SMIALOWSKI/AFP via Getty Images)
--

It would appear that President Trump is quite serious about the new strategy for dealing with the surging COVID-19 pandemic that was reported earlier in the Washington Post:

White House officials hope Americans will grow numb to the escalating death toll and learn to accept tens of thousands of new cases a day, according to three people familiar with the White House's thinking, who requested anonymity to reveal internal deliberations. Americans will "live with the virus being a threat," in the words of one of those people, a senior administration official.

Trump spent the day yesterday exhorting state and local authorities to open their schools in the fall regardless of the circumstances, saying that he planned to apply a lot of pressure to get it done. He didn't offer any federal support for this demand, clearly not having even thought about the possible complications for teachers, administrators and families. According to CNN's Daniel Dale, Trump said in an interview that there's a lot of time to figure it all out, apparently unaware that in many districts school would normally start in as little as six or seven weeks from now.

It's curious that someone who clearly doesn't care about education is so adamant about this subject, but the likeliest explanation is that he believes the only reason state and local officials are reluctant to reopen schools because they want to hurt him politically. In other words, even the issue of how to conduct the school year during a raging pandemic is all about him.

Last week Trump was asked by his most fervent acolyte, Sean Hannity, to share with his assembled fans at a Fox News town hall what his priorities for a second term might be. It was quite a revealing answer:

Yes, I know that sounds like inane gibberish, but it really did say something. Basically, what Trump admitted in that answer was that he had no idea what he was doing in the first term and now he thinks he's got the hang of it. The question is, what does he want to do with it now that he's supposedly figured it out?

Trump has no specific policy agenda or legislative priorities, but then he never did. There is his silly wall, of course. And he is inordinately proud of the fact that he signed off on judicial appointments that were chosen in advance by the Federalist Society, apparently not realizing that accomplishment would have been carried out by any Republican president who could hold a pen. Likewise with the huge tax cuts for the rich and the bloated military budgets.

He took credit for the strong economy he inherited and he believes it will rebound from the current disaster as soon as people accept all the sickness and death from the coronavirus as the natural order of things and get back to work. And there are his massively overrated "trade deals" and foreign policy disasters.

But none of that is really what Trump has learned about being president and they're obviously not what interests him going forward. The experience Trump has gained during his tumultuous three and a half years in office is that the presidency is immensely powerful and he can get away with anything.

Should he win a second term, the first and most obvious way he will use the power will be this:

His post-impeachment purge will be child's play compared to what he'll do in a second term. With henchmen like Attorney General Bill Barr, Secretary of State Mike Pompeo and Director of National Intelligence John Ratcliffe newly emboldened by Trump's re-election, I don't even want to think what will become of those the president considers his political enemies in a second term.

From the sound of his speeches and comments over the past several weeks, it's clear he believes his enemies are not just elected officials or the so-called deep state. Here's how he described them at his Mount Rushmore event last weekend:

In our schools, our newsrooms, even our corporate boardrooms, there is a new far-left fascism that demands absolute allegiance. ... Make no mistake: this left-wing cultural revolution is designed to overthrow the American Revolution. ... That is why I am deploying federal law enforcement to protect our monuments, arrest the rioters, and prosecute offenders to the fullest extent of the law. ...

Here tonight, before the eyes of our forefathers, Americans declare again, as we did 244 years ago: that we will not be tyrannized, we will not be demeaned, and we will not be intimidated by bad, evil people.  It will not happen.

Those "bad, evil people" are his fellow Americans.

We saw what happened a month ago when Trump came close to provoking a military insurrection by demanding that active duty troops be brought into the streets of America. It can't have escaped anyone's notice that Trump was energized by this confrontation with protesters and has been obsessed with it ever since. He can hardly speak of anything else.

It is tempting to see this as merely Trump ginning up his base for the campaign. And there is an element of that, to be sure. But Trump's real agenda from the beginning has been to turn back the clock to a time in his mind when the country was safe and secure in the hands of police and political leaders who knew how to keep the "bad, evil" people in their places. Remember this passage from his infamous "Central Park Five" ad:

When I was young, I sat in a diner with my father and witnessed two young bullies cursing and threatening a very frightened waitress. Two cops rushed in, lifted up the thugs and threw them out the door, warning them never to cause trouble again. I miss the feeling of security New York's finest once gave to the citizens of this City. Let our politicians give back our police department's power to keep us safe. Unshackle them from the constant chant of "police brutality" which every petty criminal hurls immediately at an officer who has just risked his or her life to save another's.

That same man, unchanged, was sitting in the White House when the Black Lives Matter protests against police brutality broke out last month. We all saw his reaction. This is the cause he's been waiting for his whole life.

Trump knows that if he is re-elected he will have virtually unlimited power, and he is promising his followers that he is going to use it to fight the culture war. He's not being metaphorical. He means it quite literally. If you want to know Donald Trump's agenda for a second term, this is it.