What sways voters amid the coronavirus crisis? Calling out Republicans over inaction on gun violence 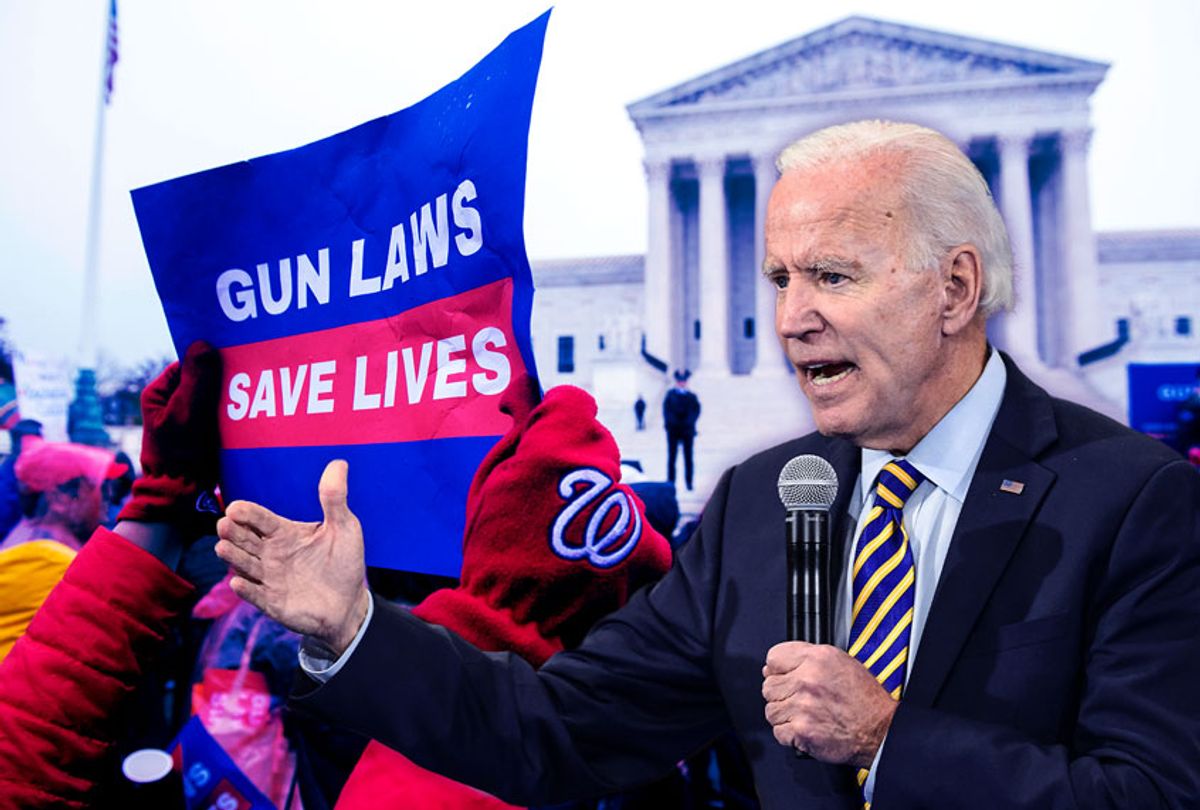 A massive survey of 13 battleground states found that gun safety-themed messages were among the most impactful in swinging voters to presumptive Democratic nominee Joe Biden amid the coronavirus pandemic.

Campaign messaging on the impact of the coronavirus on the country's gun violence crisis was the second most effective in shifting support to Biden, closely behind Democratic messaging on taxes, according to a poll of 16,500 voters in battleground states such as Arizona, Florida, Michigan, Pennsylvania, Texas and Wisconsin. The poll, which was conducted by Civis Analytics on behalf of the advocacy group Everytown for Gun Safety, was exclusively shared with Salon.

The poll showed that linking gun safety to the pandemic was nearly as effective in moving voters to Biden as Democrats' "gold standards" messages on core issues like health care and Medicare, Social Security and taxes. The findings show that voters are highly focused on gun safety in the context of the health crisis, which could serve as a road map for other Democrats in state and local races.

"Surging gun sales, high unemployment and home confinement are a dangerous combination, so it's no surprise that more Americans than ever are looking for candidates who will pass common-sense laws to keep guns away from people who shouldn't have them," John Feinblatt, president of Everytown for Gun Safety, said in a statement. "It should come as no surprise that voters now rank gun safety, which is a life-or-death issue if there ever was one, right up there with healthcare and retirement."

The pandemic has magnified the country's gun violence crisis. A Brookings Institution study found that 3 million more guns were sold between March and June than the same period from last year. Gun sales were 50% higher than expected in June, rivaling the surge in firearm sales which followed the 2012 Sandy Hook shooting.

Another study from the University of California Firearm Violence Research Center suggested that gun violence surged nearly 8% between March and May as a result of the increased gun sales. Though the authors of the study acknowledged that it is difficult to show causality, the numbers show spikes across the board. There were 354 more firearm deaths between March and May compared to the same period last year, according to an analysis by Everytown. There have been hundreds more shootings in big cities like New York and Chicago compared to the same period last year.

The increase in gun sales and violence was coupled with millions of people being forced to stay home and keep their kids out of school. The number of unintentional shootings by children increased by more than 30% between March and May. There have also been reports of domestic violence increases around the world, though many violent domestic crimes are not reported. Studies have found that access to a gun makes it five times more likely that an abuser will kill his woman victim.

The economic shock of the lockdowns has also had a significant impact.

"Unemployment is a risk factor for suicide . . . Based on historical precedent, the U.S. risks a 20 to 30% increase in firearm suicides, potentially costing the nation an additional 5,000 to 7,000 lives — about 20 more per day — in 2020," according to a report from Everytown. More than half of suicide deaths are from firearms, and access to a firearm has been found to increase the risk of death by suicide by three times.

"What we've also seen is that COVID has led to increases in gun violence, and that's happening everywhere. Gun sales have surged. Shootings and gun homicides are up. Calls to domestic violence hotlines are up. Issues of domestic violence are up. Unintentional shootings by kids at home — that's up significantly," Charlie Kelly, senior political advisor at Everytown, said in an interview with Salon. "Risks of gun suicide are through the roof."

Everytown, which spent $30 million in the midterms to help Democrats who support gun safety win back the House of Representatives and the Virginia state legislature, plans to spend $60 million in 2020. The group commissioned the messaging poll to determine whether the gun safety issue that was so effective in defeating Republicans last cycle would "still resonate" amid "all the uncertainty," Kelly said.

The messaging poll found that the link between gun violence and the pandemic is high on the minds of voters.

"Gun safety is clearly a kitchen table issue in the minds of voters," Kelly said in an interview. "It's alongside bread and butter concerns like health care, taxes and retirement security. And we believe that it really could be the difference maker in the presidential election and critical swing states — and then down ballot races across the country. And that's why we're betting so big and playing so big in 2020."

The poll tested the effectiveness of nine potential general election messages between two groups. One is the "gold standards" messaging. The other were messages highlighted the dual impact of the coronavirus and gun violence and the gun lobby.

The survey asked respondents to state their preferred candidate before asking them about their choice again after reading one of the messages. Highlighting the Republicans' support for a tax cut bill which gave 83% of the benefits to the richest Americans and corporate interest was the most effective, resulting in an average 2.2 percentage point gain for Biden. But highlighting the coronavirus' impact on gun violence resulted in 2.1 percentage point swing toward the former vice president, a bigger increase than Democrats' messages on Medicare and Social Security and protecting pre-existing conditions in the Affordable Care Act.

Highlighting the pandemic's link to the crisis is a "critical persuasion tool" in elections, Kelly said.

"It moves the needle significantly among independent voters, and it's also a huge mobilizer. And it's the key for mobilizing voter demographics we need to turn out in order to win in November," he said. "The numbers really bear this out — young folks, communities of color. It truly works to mobilize and turn folks out."

Independent and young voters were most swayed by the gun safety messaging. Biden saw a gain of 3.1 points among independents and a 2.9 point gain among voters between 18 and 34 after they were read the gun safety messaging, roughly the same as Democratic messaging on taxes. The messaging also performed more strongly than issues like Medicare, Social Security and pre-existing conditions among suburban women.

"Given the nexus between gun violence and the coronavirus, I think it's especially powerful in states like Arizona and Florida, Texas, North Carolina, [where] you're seeing the pandemic worsening — not get better," Kelly said, adding that the group had already launched a $250,000 campaign in Texas focusing on "the fact that Republicans failed to do anything on gun safety and background checks, when gun violence kills 3,200 people in Texas each year."

An earlier survey commissioned by Everytown in May found that voters from all parties, and independents, overwhelmingly favor policies like requiring background checks on all gun sales and red flag laws that block domestic abusers from possessing guns.

"If a candidate does not support, for example, background checks, red flag [laws], some of these very basic common sense policies, two-thirds, three-quarters of voters outright will not even support that candidate," Kelly said. "It's a persuasion tool. It mobilizes voters. Obviously, it's a critical litmus test issue, as well. And for that reason, I just don't know that there's another issue that has the same resonance and intensity that gun safety does across the board."

The intensity particularly surged in states like Texas and Arizona, where Republicans have long opposed any sort of limitations on gun ownership.

"We did a lot of polling earlier this year — Texas, Arizona, so many of them. People are asking for stronger gun laws by a five, six, in some cases, eight or nine to one margin," Kelly said. "People saying two-thirds, three-quarters, almost 80% of voters saying that a candidate's position on gun safety is extremely important to their vote."

Republican inaction on these issues could be their downfall in November.

"It's just been a real call to action for folks to say, 'Look, enough is enough. You had your chance, you failed, and now we're going to come vote you out in November,'" Kelly said. "And, obviously, from a message perspective, it's the right message because everyone supports these common sense policies, and folks really can't believe when they hear that their state legislative leaders are unwilling to do anything on gun safety."