Trump is "weaponizing the DHS" as his "own occupying army to provoke violence," Oregon Sen. Ron Wyden says 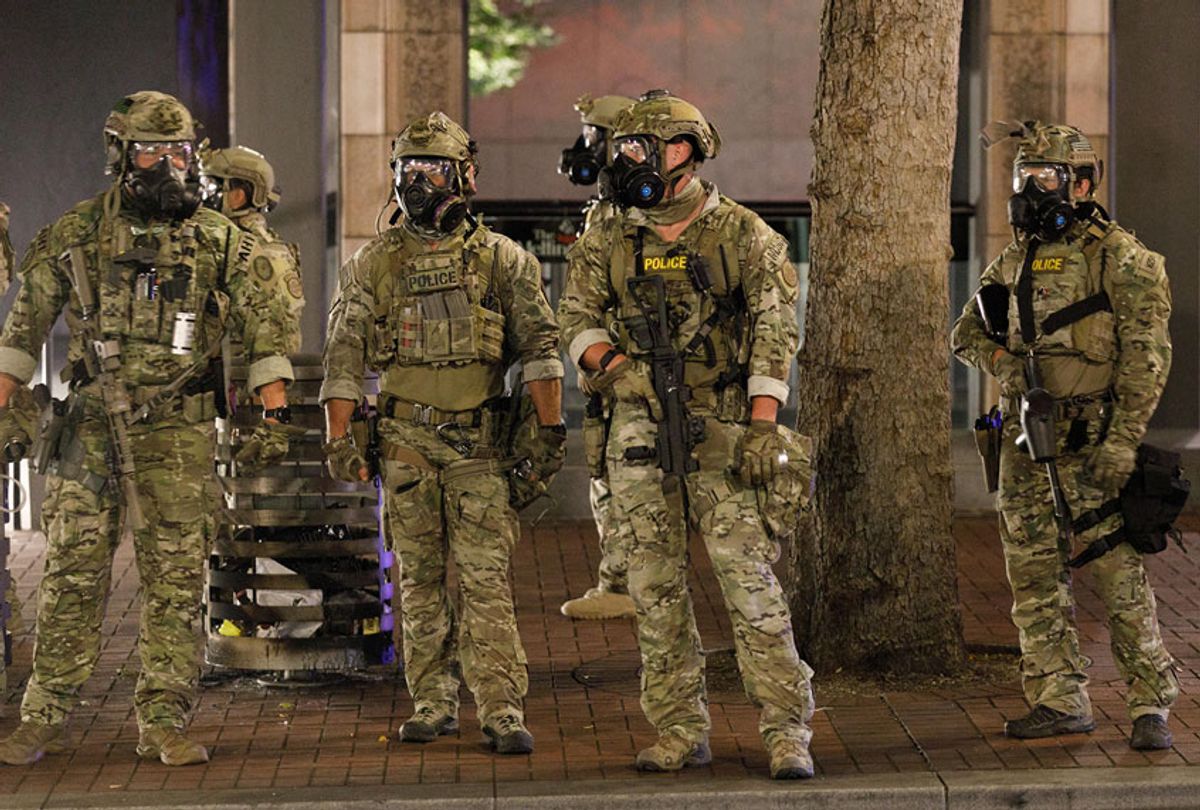 Police confront demonstrators as Black Lives Matter supporters demonstrate in Portland, Oregon on July 4, 2020 for the thirty-eighth day in a row at Portland's Justice Center and throughout Portland, with a riot declared about 12.20 am on July 5. CS tear gas and less-lethal weapons were used, and multiple arrests were made. (John Rudoff/Anadolu Agency via Getty Images)
--

Democratic leaders in Oregon called on the Trump administration to withdraw federal forces from Portland after footage emerged of camouflaged federal officers snatching protesters off the streets and detaining them in unmarked minivans.

Officers from the U.S. Marshals Special Operations Group and Custom and Border Protection's Border Patrol Tactical Unit have been deployed to protect federal property in Portland amid ongoing protests since July 14, according to Oregon Public Broadcasting. But the officials have also detained protesters who are not near federal property, the outlet reported, and it is unclear if all of the detained individuals were involved in alleged criminal activity.

One viral video showed two silent camouflaged officers lead a protester into an unmarked minivan as fellow protesters shout that they're "kidnapping people."

The officers were dispatched as part of President Donald Trump's executive order to protect American memorials, monuments and statues amid ongoing protests in cities like Portland.

"We've done a great job in Portland," Trump said Monday during a White House event. "Portland was totally out of control, and they went in, and I guess we have many people right now in jail. We very much quelled it, and if it starts again, we'll quell it again very easily. It's not hard to do, if you know what you're doing."

Instead escalating tensions with demonstrators, the president's decision has actually had the opposite effect, The Washington Post reported. Federal officers have tear gassed protesters despite a state law which prohibits chemical irritants from being used on demonstrations.

On Saturday, federal agents shot a man in the face with non-lethal munitions, fracturing his skull.

"A peaceful protester in Portland was shot in the head by one of Donald Trump's secret police," Sen. Ron Wyden, D-Ore., wrote on Twitter. "Now Trump and [Acting Homeland Security Secretary] Chad Wolf are weaponizing the DHS as their own occupying army to provoke violence on the streets of my hometown because they think it plays well with right-wing media."

Wolf visited the city Thursday to tour a federal courthouse vandalized with graffiti.

"It's time that we take a stand. It's time that local leaders here publicly condemn what violent anarchists are doing. Only then, will local police, federal police get this under control," he later said in an interview with Fox News host Sean Hannity. "Earlier this week, I called the mayor and governor. I offered DHS support to locally address the situation in Portland. Their only response was, 'Please pack up, and go home.' That's just not going to happen on my watch."

"The city of Portland has been under siege for 47 straight days by a violent mob while local political leaders refuse to restore order to protect their city. Each night, lawless anarchists destroy and desecrate property, including the federal courthouse, and attack the brave law enforcement officers protecting it," Wolf said in a statement. "This siege can end if state and local officials decide to take appropriate action instead of refusing to enforce the law. DHS will not abdicate its solemn duty to protect federal facilities and those within them. Again, I reiterate the department's offer to assist local and state leaders to bring an end to the violence perpetuated by anarchists."

Oregon Gov. Kate Brown, a Democrat, responded to Wolf's statement by arguing that the deployment of federal forces was merely "political theater."

"This political theater from President Trump has nothing to do with public safety. The president is failing to lead this nation. Now, he is deploying federal officers to patrol the streets of Portland in a blatant abuse of power by the federal government," Brown said. "I told Acting Secretary Wolf that the federal government should remove all federal officers from our streets. His response showed me he is on a mission to provoke confrontation for political purposes. He is putting both Oregonians and local law enforcement officers in harm's way."

"This, coming from the same president who used tear gas to clear out peaceful protesters in Washington, D.C., to engineer a photo opportunity," she added. "Trump is looking for a confrontation in Oregon in the hopes of winning political points in Ohio or Iowa."

Protesters Mark Pettibone and Conner O'Shea told Oregon Public Broadcasting that they were stopped by an unmarked minvan Wednesday at around 2 a.m. local time.

He said he ran when officers came out of the car and hid when a second van went after him. Pettibone was unable to escape.

"I am basically tossed into the van," Pettibone told the outlet. "And I had my beanie pulled over my face so I couldn't see, and they held my hands over my head."

Both men said they could not think of anything they did to warrant a response from law enforcement. Pettibone told OPB that he was not told why he had been arrested. He was released about 90 minutes after he refused to be interviewed without a lawyer.

"All United States Marshals Service arrestees have public records of arrest documenting their charges," the U.S. Marshals Service told the outlet in a statement. "Our agency did not arrest or detain Mark James Pettibone."

Federal officers have charged at least 13 people with crimes related to the protests, while others like Pettibone, have been arrested and released, OPB reported.

"Usually, when we see people in unmarked cars forcibly grab someone off the street, we call it kidnapping. What is happening now in Portland should concern everyone in the U.S.," the ACLU said in a statement. "These actions are flat-out unconstitutional and will not go unanswered."

"It's like stop-and-frisk meets Guantanamo Bay," attorney Juan Chavez, the head of the civil rights project at the Oregon Justice Resource Center, told OPB. "You have laws regarding probable cause that can lead to arrests. It sounds more like abduction. It sounds like they're kidnapping people off the streets."

"We do not need or want their help," Mayor Ted Wheeler, a Democrat, said. "The best thing they can do is stay inside their building, or leave Portland altogether."

"I am proud to be among the loud chorus of elected officials calling for the federal troops in Portland's streets to go home," Commissioner Jo Ann Hardesty said. "Their presence here has escalated tensions and put countless Portlanders exercising their First Amendment rights in greater danger."

The deployment is not limited to Portland. Federal officers have also been sent to Seattle and the nation's capital, according to Willamette Week.

"I think Portland is a test case," Zakir Khan, a spokesman for the Oregon chapter of the Council on American-Islamic Relations, told The Washington Post. "They want to see what they can get away with before launching into other parts of the country."