No rallies, no Death Star: Trump’s campaign is disintegrating before our eyes

Brad Parscale? Who’s he? Nothing Trump did in 2016 is working — his campaign is being managed by the coronavirus 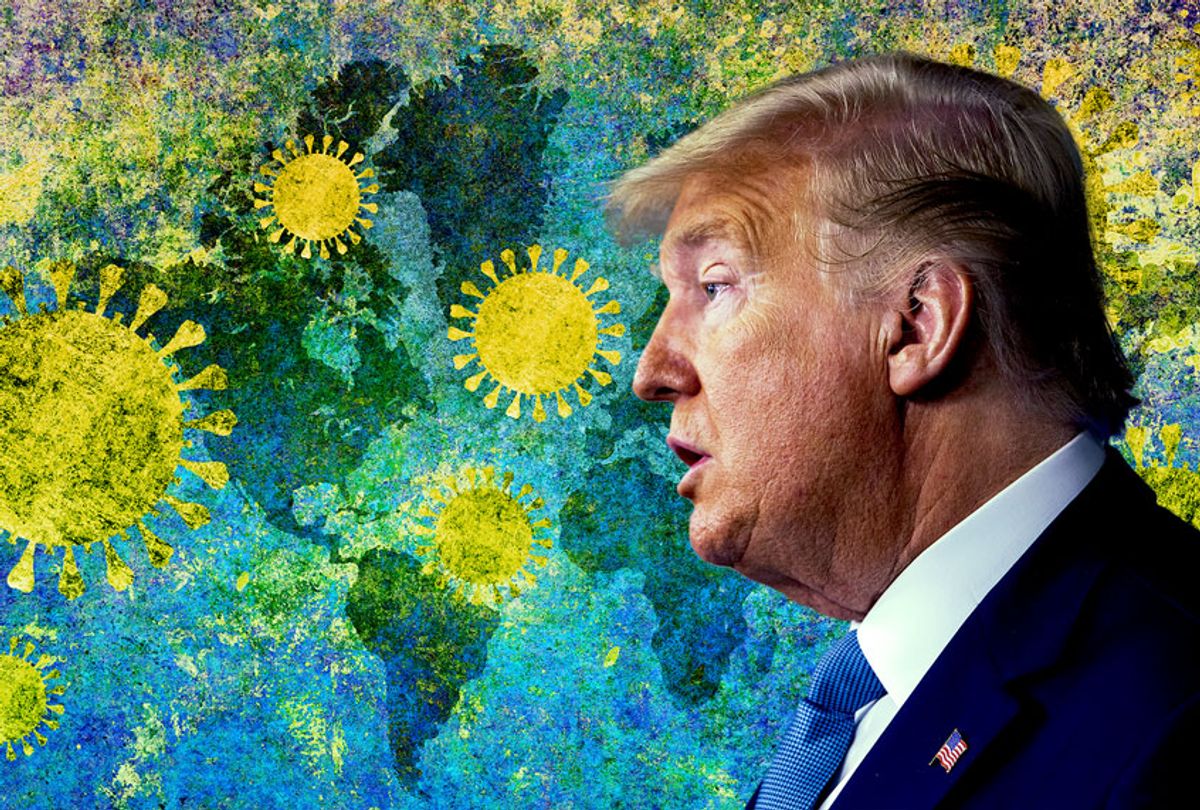 If you want to know exactly how well Donald Trump's re-election campaign is faring as we count down the final three months before Election Day, all you have to do is Google "list of rallies for the 2016 Donald Trump presidential campaign" and compare it with what you've seen lately.

Now that was a presidential campaign! Not dozens of rallies, hundreds of rallies! Trump held 187 rallies during the Republican primaries, between June 15, 2015, and June 3, 2016. He held rallies in Costa Mesa, California; Warwick, Rhode Island; Vienna, Ohio; Evansville, Indiana; Warren, Michigan; Bethpage, New York; and dozens and dozens of other cities and towns.

I remember the rally in Bethpage, because I went to it. It was held at the Grumman Studios on April 6. I was curious to see how the gold-plated flim-flam man I had followed when I lived in New York City in the '70s and '80s was doing on the campaign trail, so I logged onto the Donald Trump for President website.

Here is what I found: a short list of the upcoming rallies and an online application for a ticket to each of them. There were rallies scheduled for Rochester and Albany and Pittsburgh and Hartford, so I filled out the brief form for my ticket to the Bethpage rally and printed it out. Then I went looking for the rest of the Trump campaign website — you know, the white papers and list of endorsements and positions on hot-topic issues.

There weren't any more pages on the Trump campaign website. You could apply for tickets to the next few rallies, and that was it.

As it happened, I had been on the Hillary Clinton for President website recently for the same reason, looking for an event I could attend so I could get a look at the candidate in action. On the left of the main page, there was a list of upcoming campaign events — fundraisers, rallies, town meetings and so forth, covering several weeks, as I recall. Hillary wasn't appearing at a single one of them. Instead, "surrogates" stood in for her – Bill Clinton, Chelsea Clinton, various senators and sometimes a governor. But no Hillary. On the right side of the page were links to about 35 campaign "white papers" giving Hillary's positions on everything from immigration to crime to health care to gun control. But at least for the few weeks covered by the campaign's main webpage at that moment, Hillary Clinton was not to be found.

In the same few weeks covered by the schedule on the Clinton for President website I looked at, Trump appeared in Connecticut, New York, Indiana, Maryland, Pennsylvania, Delaware, Rhode Island, West Virginia, California and Oregon.

Trump's campaign after he won the Republican nomination was just as busy. He appeared in 129 rallies between June 10 and Nov. 7 of 2016. He was all over the place: fairgrounds, convention centers, Las Vegas casino hotels, airports, sports stadiums, concert venues, even an equestrian center in Jacksonville, and a maritime park amphitheater in Pensacola, day after day, rally after rally, sometimes two in different cities on the same day.

Meanwhile, in some office park in San Antonio, Texas, a political unknown by the name of Brad Parscale was gearing up to run a virtual campaign on social media, raising money and running ads on Google, Twitter, and Facebook to a targeted audience, largely using the names of people who had signed up for tickets to Trump's rallies during the primary and general election.

You know the result of Trump's 300-plus rallies in 2015 and 2016, supplemented by Parscale's expert manipulation of Facebook and Twitter with some Russian hacking and social media mischief thrown in. He won.

And he planned to win again in 2020 by following the same playbook: dozens, perhaps as many as a hundred rallies, complimented by a brand new Parscale digital operation he labeled the "Death Star" in a May tweet.

So how's the Death Star firing, Brad my boy?

Parscale was removed as campaign chairman this week, replaced by a former Chris Christie factotum named Bill Stepien, one of whose career highlights was being named in the infamous "Bridgegate" scandal involving the closure of several lanes of the George Washington Bridge in 2013. Stepien saw duty as "field director" during Trump's 2016 campaign, and the way things are going now, directing traffic is about all that's left for him to do in 2020.

As for those rallies? Well, Trump appeared at a grand total of 10 rallies back in January and February before the coronavirus took hold of the White House and began to strangle its grand plans. Last month, a rally was held in deep-red Tulsa, Oklahoma, which was intended to kick off the Trump 2020 general election campaign. You know how wonderfully that turned out. After bragging on social media about a million tickets that had been sold for the Tulsa arena (which held only 19,000), Trump was able to "fill" the arena with just over 6,000 of his most loyal base voters. An "overflow" rally outside the arena was canceled when nobody showed up.

A few days later, Trump held another rally at the Dream City megachurch in Phoenix, attended by an audience of about 3,000 students.

Few attendees at either rally wore protective masks, despite a local ordinance requiring them in Arizona. There was an outbreak of coronavirus in Tulsa following the rally there, and the Republican governor of Oklahoma, Kevin Stitt, who attended the rally, tested positive for the virus this week. On Wednesday, Oklahoma saw its largest one-day increase in coronavirus cases, rising by 1,075, nearly a 5 percent increase in the state's total number of cases.

The Republican National Committee announced plans for a scaled back convention next month in Jacksonville, complete with social distancing and masks. Most convention events will be restricted to about 2,500 delegates. On the final day, Aug. 27, when Trump gives his acceptance speech, alternate delegates and guests will bring the total allowed inside the arena to about 7,000. The Trump campaign has been scrambling for new venues to hold rallies where they won't have to worry about the kind of depressed turnout they got in Tulsa. As of this weekend, no new rallies had been scheduled.

But even more worrisome for Trump was a story in the New York Times last week reporting that Facebook is considering banning political ads on its site sometime before the November general election. Facebook advertising was as important to Trump in 2016 as rallies were, and with the campaign facing the possibility of no more rallies at all, Facebook looked to be even more important this year.

If Facebook pulls political ads and Twitter continues to fact-check Trump's tweets for lies and hate speech, all he will have left is Rose Garden press conferences like we saw on Tuesday, when Trump accused Biden of being against windows (!) and accused him of plans to disarm America's military, among sundry other unhinged accusations and cries of "Where's Hunter?" referring to his rival's son, Hunter Biden. By Thursday, Trump was railing about Biden's plans to deprive home dishwashers of water and blind everyone with low-wattage LED light bulbs.

We haven't even gotten into Trump's cratering poll numbers. He is down by double digits nationally, down by double digits in most battleground states, and even down in double digits among his own Republican base when it comes to his performance in handling the coronavirus. And then there are the worst numbers of all: almost 140,000 dead, with the CDC estimating 170,000 by Aug. 8. A record 77,000 people were diagnosed with the virus on Thursday, and 926 died. The numbers keep going up almost every day.

There are only 15 weeks left before Election Day on Nov. 3, and a lot can happen in American politics in 15 weeks. We learned that in spades in 2016, didn't we? But Trump isn't just running against Joe Biden. He's running against a virus that doesn't belong to a political party, doesn't watch Fox News, and doesn't care how many times the president of the United States tries to wish it away. The virus has a big vote this year, and so far, it's voting against Trump. It's one of the tragedies of our political system that so many people have to die for one incompetent, corrupt man to lose the presidential election.