"The Alienist" returns, but strains against its beautiful but oh-so-serious corsetry

The second season of TNT's Victorian-era murder mystery wants to speak to history, but rigor mortis has set in 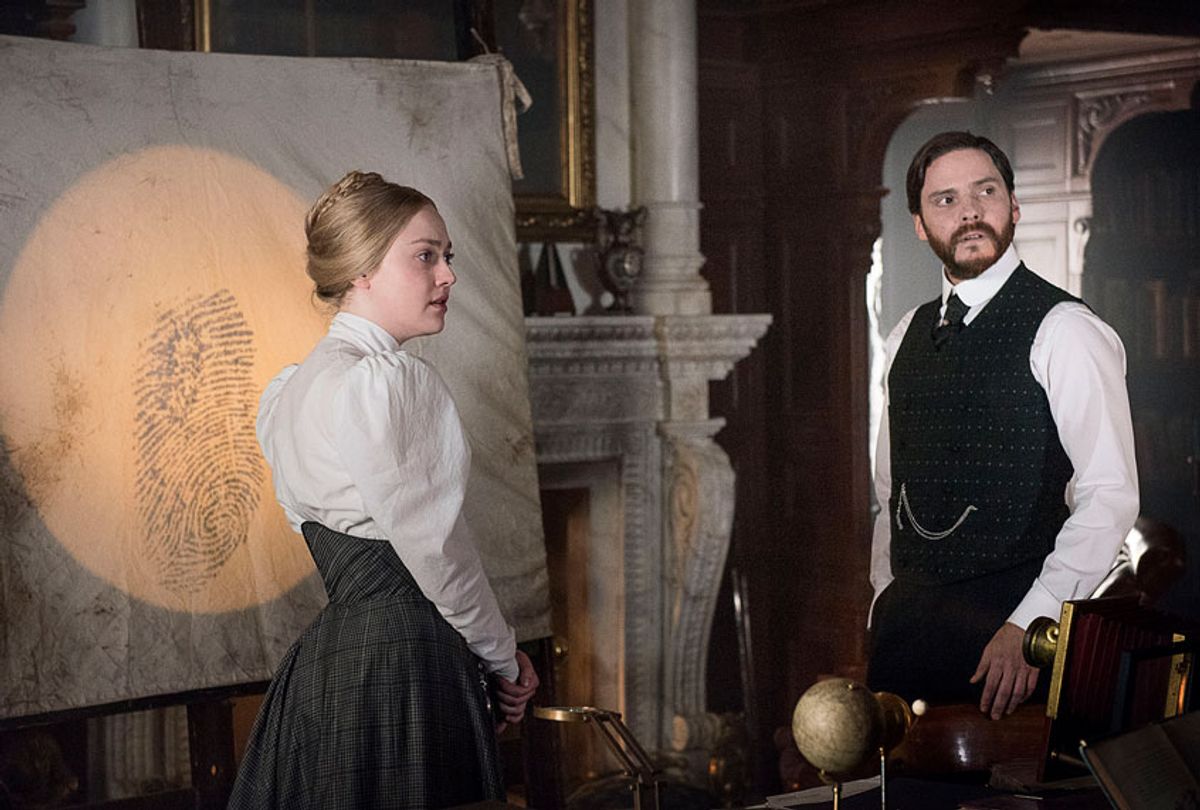 Watching a period piece strain to meet the present's political and social circumstances can be painful. Doubters only need to sit through an hour or two of "The Alienist: Angel of Darkness," the follow-up to TNT's 2018 adaptation of Caleb Carr's "The Alienist," to understand the meaning of that. In fact, you don't even need to take in that much.

Within the first few minutes that Dakota Fanning's Sara Howard lands in the story – first as she speeds her carriage through the main thoroughfare of turn-of-the-20th century New York City, then as she stiffly addresses the staff at her detective agency – her performance and those of the women surrounding her struggle against the production's corsetry.

Sara Howard, now out on her own and determined to make a name as a female detective, is a serious woman who is serious about the world taking her seriously. In a roomful of men watching a wrongfully convicted woman about to be executed, she objects and spitefully quotes Thomas Jefferson at them. Alas, the argument is pointless as her dispirited colleague Dr. Laszlo Kreizler (Daniel Brühl), reminds her with stiff formality. The only man in the place that has a whiff of life and sanguine emotion about him, as always, is journalist John Moore (Luke Evans), but only because he's an educated man with a bit of rough around the edges.

Viewers got to know these characters in the original season of the series, a drama that was in many respects years too late to the serial killer mystery party but draped itself in enough Victorian-era atmosphere and opulent set design as to intoxicate the viewer to stick around for at least a few episodes. The team of sleuths, led by the analytical, dispassionate alienist Kreizler, moved within that world's beauties and grotesqueries quite smoothly.

Initial episodes met the challenge Carr set with regard to his 1994 novel's descriptiveness, where it was simple enough for a reader to get as lost as in the elaborate formality of the rooms these characters traversed and even their lengthy dining excursions. But I did not plow through all of its 10 episodes enthusiastically. The title's enthusiasts seemed to like it well enough, given the steady ratings; at any rate, TNT picked up "Angel of Darkness" months later after an angry summer largely defined by #MeToo.

The choice is a natural given both the steady viewership and the appeal of the second story's focus on Sara as she battles to make headway in her profession and to help the cause of women's rights and suffrage. Against this backdrop is a lurid eight-episode mystery involving the ritualistic kidnapping and murder of infants – one of which turns up, most gruesomely, in a place marked by innocence.

"Angel of Darkness" may be set in 1897 but the script's intentional highlighting of the similarities between then and now are obvious. Like Carr's introduction to this world and its familiar characters, the disparity between the wealthy and the poorest of the poor is draw with a razor's sharpness and made tangible by way of a difference in lighting and filth levels.

Not a bit of the original's atmospheric quality is lost in the years that have passed between the two seasons; it's still a gloriously lovely and brutal series to take in. But the seriousness of evoking the parallels between the sensationalist journalism of turn-of-the-20th century America and today's version appears to have gone to the heads, and the bodies, of its actors. If Fanning's relative stiffness was excusable in "The Alienist" owing to the idea that Sara's confidence in her intellect was new and constantly being assaulted in this man's world, here she's calcified her emotions. Brühl's Kreizler feels even stiffer, to the point of making Ted Levine's still-crooked Thomas Byrnes, the former police chief, achieve Snidely Whiplash levels of hamminess.

He's only one character among a bevy of side players who come off as cartoonishly two-dimensional which is good news for Evans, who comes off OK in the midst of this. No matter. The entire cast could behave as cold and stiffly as corpses, and as long as we're also wheeled through brocaded beauty and inspired grotesquery, this follow-up will have done its job.

If the goal of "Angel of Darkness" is to speak to the now and make us think, however, that trail only leads to a dead end.

"The Alienist: Angel of Darkness" premieres Sunday, July 19 at 9 p.m. ET on TNT.