Remember, "Indian Matchmaking" is as much of a entertainment fable as all of romance reality

Netflix's hit provides some education about arranged marriage, but leaves contextual info off the show's biodata 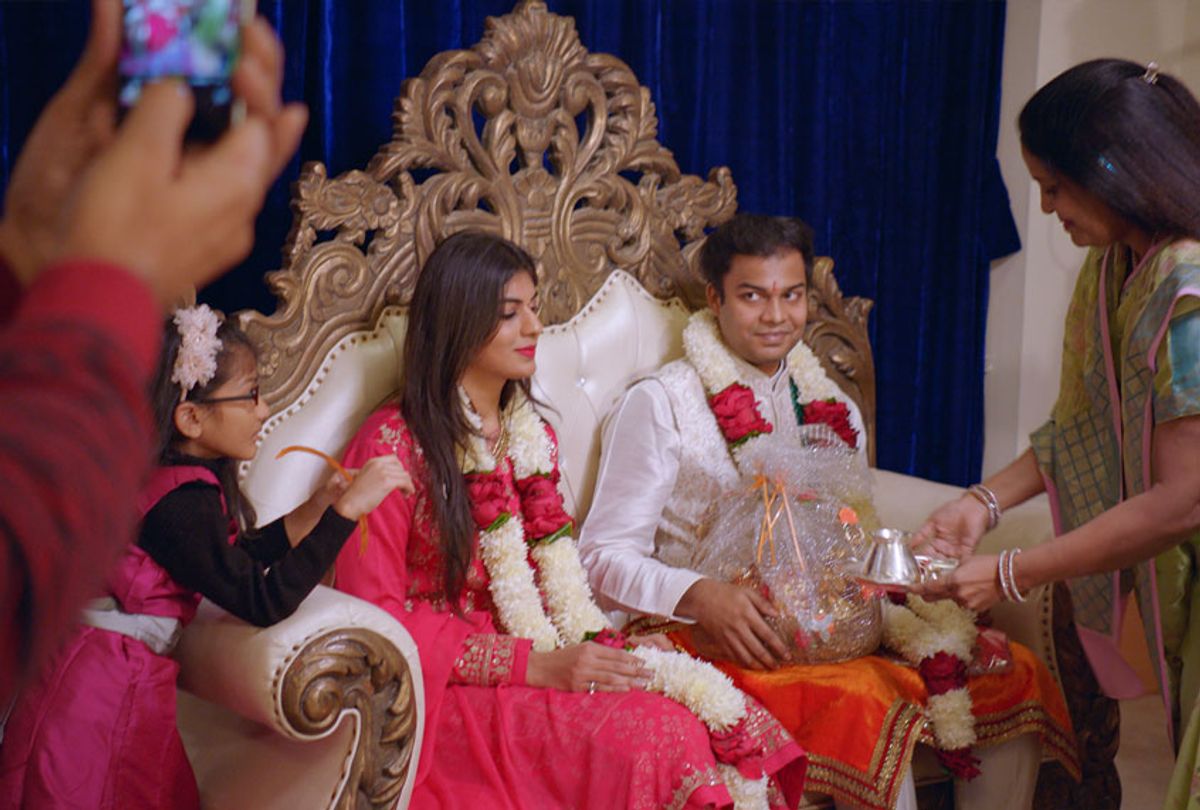 Out of all the recent Netflix docuseries to catch fire with audiences, the runaway success of "Indian Matchmaking" takes the cake for its provocative approach. Few other series ignite feelings and viewpoints about the difficulties of modern dating, courtship, romance and marriage like this one, and the clients upon whose behalf Mumbai matchmaker Sima Taparia works to find love definitely vary in their expectations on each of these fronts.

The series' approach also assumes a level of understanding as to why viewers are tuning in, which likely comes down to several parts curiosity – about a culture about which the average American viewer who isn't of Indian descent may not fully understand, and about arranged marriage generally – under a mounded dollop of yearning for entertainment variety in a time of limited diversionary choices.

By employing the same plot accelerants and editing that make such series as "Dating Around" or "Married at First Sight" so addictive, a person can't help but invest in the romantic aspirations and character follies of Sima Aunty's main featured clients, four of whom are based in the United States and three in India. That "Indian Matchmaking" also allows us to tag along on these various journeys without pausing to explain the culture beyond translating specific colloquialisms should be to its credit.

Then there's that other sense of provocation, where a close and hard read of "Indian Matchmaking" reveals infuriating choices in its editing, such as breezing by Sima's casual perpetuation of colorism and bias in the service of of clients and their families.

Or lack of transparency with regard to the class similarities among the featured subjects or the cost of Sima's services. Some of this matchmaker's motivations and personal quirks are in themselves worth interrogating, along with the passive implication by both her and the production's styling that arranged marriage is a standard across a culture presented as more or less homogenous  – which it isn't – and that it may even be preferable to so-called "love" marriages. (The outcomes of the pairs that have been revealed in the various and inevitable  "where are they now" articles tell us that ain't necessarily so.)

None of this necessarily takes away from the massive entertainment value to be had in watching "Indian Matchmaking," to be clear. But it does bring the perils of presenting a culturally specific version of the practice in a romance reality series format with little to no expository context into sharp relief.

Series creator Smriti Mundhra, who co-directed the 2017 documentary about arranged marriage called  "A Suitable Girl," leaves out all of that film's unblinking truths about arranged marriage in favor of presenting the rosier side of the practice with little questioning or judgment. And there's some usefulness in that approach in terms of shedding light on a practice many Westerners view negatively.

The matchmaker herself is featured prominently in Mundhra's 2017 film and has been with her husband for nearly four decades, having been matched with him at a young age. Her daughter Ritu, one of the main subjects the filmmakers follow, describes her mother as a socialite, and the film makes the family's wealth and status fairly clear.

That detail might be useful for "Indian Matchmaking" viewers to consider. Although it's less important to acknowledge than a few phrases and inscrutable turns begging to be discussed and dissected, such as: What does that coded reference to preferring "North Indian" options mean?

Are potential suitors in some scenes simply nervous, bored or horrified? Is Sima more invested in serving her would-be brides and grooms or the client's parents, some of whom linger nearby to support, others impressing their will upon their sons or daughters? In any case, the matchmaker speaks freely to the audience about how tough and yet rewarding her gig can be, and uses the case of each client to make grand summaries about questing for love. And this may be attractive and even useful for the average Tinder user who was already sick of swiping right or left before the pandemic put another damper on their dating lives.

That doesn't make the matchmaking process look like a simpler solution. In fact, for all of its merry illusion and choices to drop several storylines in places perceived to be "good," "Indian Matchmaking" actually confirms one's suspicions that finding The One is an arduous process whether a single person seeks human assistance or goes it alone using tech or in-person social situations.

Within eight episodes we meet main seven people searching for marriage partners to whom Sima presents elaborate curriculum vitae known as "biodatas," extensively listing the backgrounds and personal desires of potentially suitable matches. Sima also works with an astrologer and a face reader to validate her instincts on each and in the case of one woman, grants her a good excuse to break out a nice sapphire cocktail ring for everyday use.

None of her clients fit the working-class descriptor. One, Mumbai-based jewelry designer Pradhyuman Maloo, views himself as being of a status near royalty and flat-out turns down some 150 potential matches, driving his parents to the limits of their sanity. Akshay Jakhete, a recent college graduate, is under serious pressure from his parents to find a bride although his apparent lack of enthusiasm around the process, or life in general, is perceptible to anyone with eyes that work.

Then there's the empowering Ankita Bansal, a clothing designer who shook off her family's pressure to get married – particularly after a few people oh-so-helpfully suggested that she needed to lose weight to find a husband – and built a successful business instead. She's seeking a husband on her own terms with Sima's assistance.

The contenders living in the United States, meanwhile, include: Austin, Texas high school teacher Vyasar Ganesan, the son of a single mother who divorced Ganesan's violent father when he was quite young; Denver-based Rupam, whose divorcee status is considered a stigma and shortens her list of options; and Nadia Jagessar, a New Jersey event planner set-up early on to be this season's designated Cinderella story. There's one more who will be addressed later.

Each comes from families that might be economically described as comfortable at the very least. Certainly this image of class similarity is nothing new in romantic reality, a subgenre built upon peddling heteronormative visions of fantasy dates, happily ever after outcomes, princess fetishes, and overwhelming whiteness. (This isn't even the first series about arranged marriages; the short-lived "Arranged" followed couples matched by professionals or their own families from a variety of backgrounds, including white American evangelical couples.)

A popular critique of this show points out the producers' willingness to let Sima's frequent citations of fair skin and slender builds as the standards of quality in potential brides fly by without any pushback. Then again, these qualifications are part of pretty much every dating series cast to say nothing about qualifications in dating site profiles.

Sima simply says the quiet part out loud, which is the difference. The question is whether the viewer perceives this as a normal trait of desirability in a culture, or as an abhorrent double standard the matchmaker applies to women more than men, along with her insistence that hard-to-match female clients be more flexible and compromising.

Taking all of this into account, which most people won't, "Indian Matchmaking" is still as undeniably appealing as any series operating on a similar level of unreality, such as "The Bachelor" or "The Bachelorette." In the way of all romance reality, it is easy to love, loathe (on a surface level) or empathize with Sima's clients. Sima serves more as a host than an audience guide although with each client she dispenses what she considers to be sage advice for finding a life partner, primarily flexibility and a willingness to compromise, which some take to heart and others not so much, and with good reason.

"Indian Matchmaking" gives viewers tastes of all these elements in each person's story and tosses in some comedy of persnickety behavior for good measure. Those who have seen the series can probably guess to whom that refers: Houston-based attorney Aparna Shewakramani, this season's highly memeable anti-heroine who is either adored for clinging to her high standards (the most famous being for rejecting a potential suitor for not knowing that there are salt flats in Bolivia – how declassé!) or derided for the same reason.

But she's never presented side by side with Ankita, a woman with similar expectations and who loudly questions the methods and motivations of both Sima and another supposedly more modern matchmaker she brings in to assist in Ankita's search, whom Ankita likes even less. The series intentionally leaves every storyline open, save for one that ends with a pre-engagement party involving a pair that displays zero chemistry with one another. In doing so, it presents Ankita as seizing her own version of a happy outcomewith no regrets, which may be the best moral of the story this fairy tale series has to offer.

It also implicitly reminds the viewer of what we're watching, which is a soft-scripted fable version of a topic dear to the series creator's heart. Those seeking more substance following their "Indian Matchmaking" binge would do well to sit through Mundhra's 2017 documentary, which grants a somewhat broader sense of what arranged marriages can look like for rich people or for poorer while leaving out any cases demonstrating versions of the practice that are not equitable or even humane.

Nevertheless, one line from the documentary sticks more than any quip from "Indian Matchmaking," an observation from one of the main subjects who relinquished a promising, satisfying career and uprooted herself from her hometown to marry into a politically prominent family in another part of the country. Throughout "Indian Matchmaking" Sima stresses that both the women and the men are free to say no; this woman's story tells another tale.

She did what she had to do, she says, with the understanding that one day she'd be able to resume working. What happens is worse than that. "You lose your identity when you get married," she says, "and that's one thing I never wanted to do." More than 80% of people who come to her home, she adds, don't even know her name. This, from the mouth of a wealthy woman otherwise happily married to a man around whom, by her report, her whole life revolves.

So yes: enjoy the sweetness of "Indian Matchmaking." Laugh, dish, share the memes, and at least view any assertion from the self-assured Sima with the same skepticism you'd reserve for any relative who claims to know everything. Their personal reality is not necessarily universal . . . but it sure can be entertaining to take it in.

All episodes of "Indian Matchmaking" are current streaming on Netflix.

"A Suitable Girl" is available on Amazon Prime and streams free for Prime subscribers.