Trump had threatened to veto the bill, vowing “we’re not doing anything without a payroll tax cut” 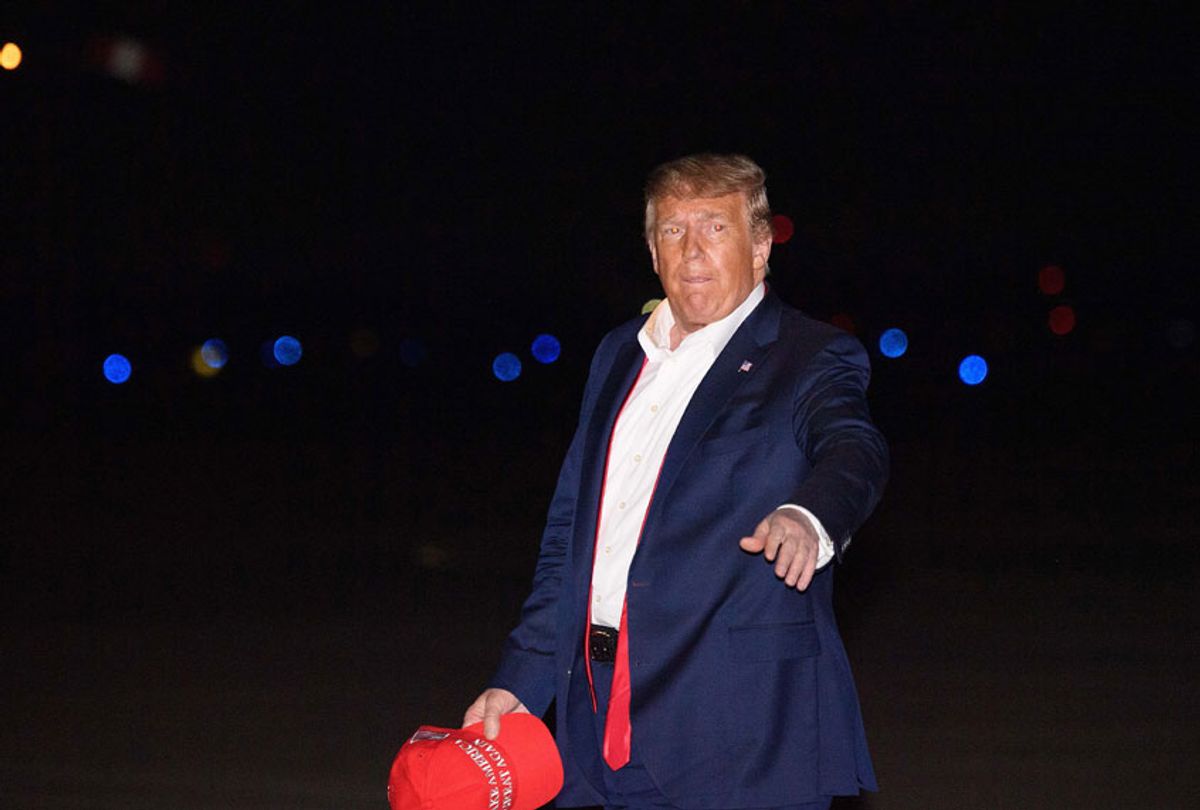 US President Donald Trump steps off Air Force One at Andrews Air Force Base in Maryland on June 21, 2020 after returning from a rally in Tulsa, Oklahoma. (NICHOLAS KAMM/AFP via Getty Images)
--

President Donald Trump blamed Democrats after his own party rejected his demand for a payroll tax cut in the next phase of coronavirus relief.

Treasury Secretary Steven Mnuchin announced Thursday that the tax cut, which would do nothing to help the 30 million unemployed workers and do little to aid employees, "won't be in the base bill."

Mnuchin insisted in an interview with CNBC that the administration believed the "payroll tax cut is a very good pro-growth policy," even though it overwhelmingly benefits the richest 20% of earners while cutting funding for the Social Security and Medicare trust funds. It was also "vehemently opposed" by Republicans at a recent meeting with administration officials.

The notion was dropped from the Republican plan despite a veto threat from Trump.

"We're not doing anything without a payroll tax cut," Trump declared in a Sunday interview with Fox News.

Despite the strong pushback from his own party, Trump blamed Democrats after his top priority quickly going down in flames.

"The Democrats have stated strongly that they won't approve a Payroll Tax Cut (too bad!). It would be great for workers," he claimed on Twitter. "The Republicans, therefore, didn't want to ask for it. Dems, as usual, are hurting the working men and women of our Country!"

"This is not the dynamic that we've observed first-hand on Capitol Hill," Politico congressional reporter Jake Sherman said in response to the tweet.

"This is some serious revisionist history," NBC News Capitol Hill correspondent Garrett Haake added. "A majority of Senate Republicans didn't want a payroll tax cut, THAT's why they didn't ask for one in negotiations."

The payroll tax cut, which would do nothing to help the 11% of the workforce who lost their jobs amid the pandemic, was scrapped in favor of another round of $1,200 direct payments.

"The president's focus is — he wants to get money into people's pockets now, because we need to open the economy," Mnuchin said.

But the administration and Senate Republicans are still pushing to dramatically slash the $600-per-week federal unemployment benefit boost set to expire next week. Republicans have argued that the benefit is larger than many workers' previous salaries and are a disincentive to return to their old jobs.

Analyses have shown "no evidence" that is the case, and about 70% of unemployment recipients who went back to work last month returned to jobs that paid less than the enhanced benefit. An analysis by JPMorgan Chase found that the generous unemployment benefits have helped counteract a steep drop in spending by those still employed. A former Treasury Department economist estimated that even a partial cut to the unemployment benefit would shrink the U.S. economy and cost hundreds of thousands of jobs.

Though many businesses have reopened, California and Texas, the two most populous states in the country, have rolled back their reopenings and shut down hundreds of businesses, while the city of New York has indefinitely delayed the reopening of indoor dining and gyms. Job openings are still down about a quarter from where they were before the pandemic hit, and there are more than three times as many unemployed Americans as there are job openings.

Mnuchin's comment came as the Labor Department reported that 1.4 million people filed new unemployment claims in the past week, the first increase since March.

Democrats have rejected Republican calls to cut the enhanced unemployment benefit, prompting the GOP to mull a temporary extension through December, which would slash the benefit from $600 per week to $100 per week. If the extension is included in the upcoming relief bill, Republicans are pushing to cut it to under $200 per week.

House Democrats passed a $3 trillion bill, which included a full extension of the $600-per-week benefit in May. Republicans refused to start negotiating until this month. Mnuchin admitted on Thursday that he was unsure a bill would pass before the unemployment benefits and other CARES Act measures expire.

"I don't know. We'll see," he told Politico. "We're trying to get it out as quickly as possible."

Democrats said Republicans should have acted sooner rather than push for piecemeal extensions now that time is running out.

"One of the reasons we're up against this cliff is because Republicans have dithered," Senate Minority Leader Chuck Schumer, D-N.Y., said on Thursday, adding that Republicans and the White House were "so divided, so disorganized, so unprepared that they have struggled to even draft a partisan proposal within their own conference."

The GOP wants to limit its proposal to around $1 trillion. That includes at least $500 billion for the Department of Health and Human Services and various health programs, the Pentagon and farmer and infrastructure programs, according to Politico. It also includes $25 billion for coronavirus testing.

The proposal would also provide $105 billion to help reopen schools — with schools that reopen for in-person learning despite concerns over infection spikes around the country set to receive more funding — and $90 billion to extend the Paycheck Protection Program, which helps small businesses keep paying workers.

The Democratic proposal included $1 trillion to help states and cities deal with massive budget shortfalls caused by the economic shock from the pandemic, though the GOP proposal includes no such funding. Instead, it would only give local leaders more flexibility on how they can spend the $150 billion Congress allocated back in March.

McConnell has also pushed to include a provision which would protect companies from liability if their employees get sick at work. Democrats strongly oppose such a measure.

"What we have seen so far," Speaker of the House Nancy Pelosi, D-Calif., said during a Thursday news conference, "falls very short of the challenge that we face in order to defeat the virus and to open our schools and to open our economy."