Trump’s stormtroopers crush liberty on the streets of Portland

If Trump loses the election, he could use this new private army of brownshirts to overthrow our republic 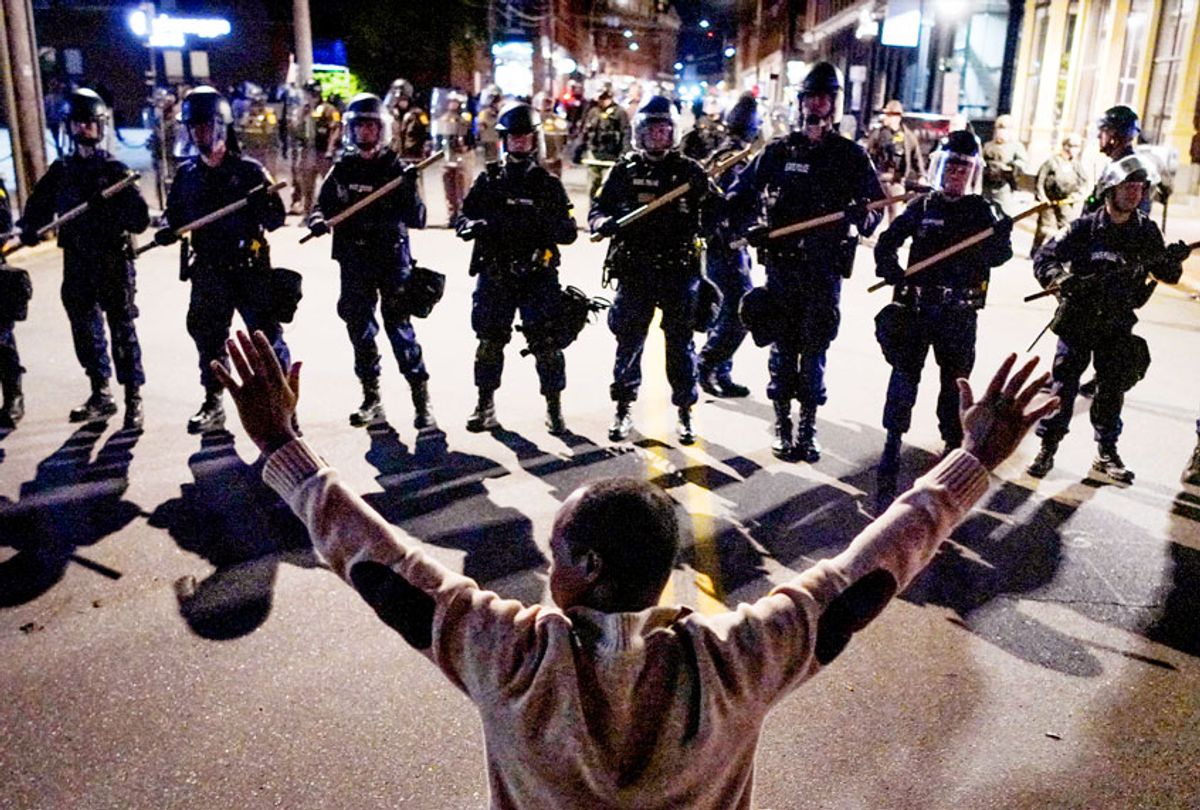 Sending armed federal law enforcement dressed in combat fatigues to grab people off the streets is an intentionally provocative strategy. Some of those arrested, and one shot with a rubber bullet that fractured his skull, appear in videos to have been acting lawfully when they were attacked by what amount to Trump's secret police.

The attacks ordered by the wannabe dictator in the Oval Office — and overseen by his consigliere, William P. Barr — come with unlimited potential to provoke more violence. Widespread use of these tactics, especially as Election Day nears, could even create a pretext for attempting to overthrow our republic and the peaceful transition of power to a new president should Trump lose the popular vote and the Electoral College.

Such actions could provoke a civil war by emboldening the armed anti-Semites, fascists, nativists, racists and haters of liberty for people they dislike. That risk is remote, at least today, but that could change quickly.

Those are strong words, and the worst may not come to pass. But given the threat of Trump's malevolent nature and mental illness pose, it would be foolish not to warn about the potential in his egregious abuse of power in Portland.

Sadly, the actions of local officials in Portland, its two U.S. senators and other elected officials have been milquetoast. Writing letters and making phone calls asking Trump officials to please stop is like holding a hand up to a tsunami.

While it would itself be provocative, Mayor Ted Wheeler could order Portland police to arrest anyone grabbing people off the street who is not in uniform. Wheeler is also the city's police commissioner.

Trump is a friend to enemies of law and order. Not only has he called neo-Nazis, Confederacy romanticizers and anti-Semites "very fine people," he has pardoned and commuted the sentences of criminals whose felonies he thinks were proper conduct, as with Roger Stone and former Phoenix-area sheriff Joe Arpaio.

In 2018, Trump pardoned two ranchers involved in the seizure of the Malheur National Wildlife Refuge in southeast Oregon, part of a 41-day standoff by people who claim, like Trump, that they are above the law.

And it's not just private citizens who think violence is the answer to policies they dislike. Last summer State Sen. Brian Boquist, a Republican state senator in Oregon, threatened during a television interview to shoot any police the state's Democratic governor might send to force GOP legislators to meet at the Capitol. The Republicans had fled the Capitol to avoid a vote on a climate change bill.

In these circumstances, who knows if those grabbing people off Portland streets — sometimes covering their heads as if they were battlefield prisoners and tossing them into unmarked rented vehicles — are indeed federal cops or just opportunistic and politically motivated kidnappers?

Law enforcement, used legitimately, has a duty to protect demonstrators and reduce the risk of violence. We see this all the time during heated protests, where local police often segregate opponents and confer with protest leaders to minimize risks to the safety of people and property.

So why arrest Trump's insignia-lacking agents? Better to act in the name of safety and let it all be sorted out in court than to endanger the Portland citizenry by creating opportunities for private militias to exploit such situations. Better, too, to get a clear court ruling on whether Trump is abusing his powers or we need new federal laws to prevent such dangerous actions.

Contempt for the Constitution

The Portland abuses should be viewed in the context of Trump's utter disregard for our Constitution. He has falsely claimedthat Article II lets him do anything he wants. George Consovoy, one of his lawyers, told a federal judge last October that were Trump to actually shoot someone on Fifth Avenue, the New York police could not investigate, even if the victim was killed.

At every turn, Trump emphasizes his view that he is above the law, even after all nine Supreme Court justices explicitly told him otherwise. (The two dissenters in the Manhattan grand jury case both agreed with that principle, just not Chief Justice John Roberts' majority opinion in full.)

Trump said Sunday he may not accept the election results if he loses.

We've reported in the past about what will happen if Trump refuses to leave the White House. For sure he has thought about how to hang on if voters reject him. Of course, he may try to escape the ignominy of being a loser by playing golf on Inauguration Day or hosting a self-congratulatory party for sycophants at Mar-a-Lago. But should he try to hold on to the Oval Office the moment his successor is sworn in, the Secret Service's duty will shift to the new president. They would frog march a recalcitrant Trump out of the building.

But that assumes we are not in the midst of nationwide violence fomented by Trump's agents provocateurs and that he has not fired senior Secret Service agents who refuse to swear allegiance to him—as he tried to get James Comey to do when he was FBI director — and replaced them with loyalists.

Trump appeals to his slowly shrinking base by conflating protesters and anarchists, with little evidence of the latter. But those who only get their news from Fox, Breitbart and the like evidently believe Trump is their savior and those who criticize him are — take your pick — anarchists, corrupt, communists, fools, idiots or, worst of all, liberals. For many Trumpers, empirical facts don't matter.

On Sunday, Trump told Wallace on Fox, "You know, if you look at what's gone on in Portland, those are anarchists and we've taken a very tough stand. If we didn't take a stand in Portland, you know we've arrested many of these leaders. If we didn't take that stand, right now you would have a problem like you, you—they were going to lose Portland. So, let's see…"

Lose Portland? The locals are laughing.

Trump is the principal reason protests in Portland have persisted and grown larger, as the smart newspaper Willamette Week reported Monday morning:

"Trump deployed federal police to Portland to quell six weeks of protests. He has achieved the opposite effect. The crowds gathering outside downtown courthouses on July 18 and 19 were as large as any Portland has seen in the past month. The crowd also appeared significantly older than at any previous demonstration.

"That's in no small part because reports of aggressive tactics by federal officers — including shooting a protester in the face with a munition, detaining people in rental vans, and tear-gassing a county commissioner — have galvanized residents of this city to confront what they see as a military occupation."

The Portland Oregonian, in a Sunday editorial, mocked a Trump minion for turning annoying protests into an attack on our nation and also called out Trump's self-serving trouble making:

"It's a good thing there was photographic evidence establishing that acting Homeland Security Secretary Chad Wolf actually visited Portland last week. Because based on his florid statement about our city "under siege," a reasonable person would assume the entire city is in flames and no one can go outside safely at night.

"In Wolf's Portland, a mob that 'escalates violence day after day' has been terrorizing the city. He paints a picture of the Wild West or a future dystopia where lawlessness abounds, and local authorities sanction criminality. And in go-for-broke hyperbole, Wolf equates vandalism of the federal courthouse with an attack on America itself.

"Yes, parts of downtown have been trashed. Many public and private buildings have been shuttered to protect them from further damage. But let's call Wolf's visit what it is: A political play ­by a Trump appointee using Portland as the backdrop. He is seizing the opportunity to create a false narrative of the federal government saving the day.

"In truth, federal intervention has only made things worse."

This kind of provocative behavior by the Trump administration is not all that far from disappearing people Argentina-style. That Customs and Border Patrol and other federal law enforcement agents are willing to shoot a man for holding up a portable music player should remind us that bureaucrats, including those who should be in uniform, do as they are told. That's why we saw babies and small children ripped from their mothers and fathers and put in cages, some of whom have quite literally disappeared.

These actions come as Trump is losing his bullying grip on Republicans. Since he won the Republican nomination four years ago this month only one Republican in Congress has had the fortitude to reject his antics, Justin Amash of Michigan. He quit the GOP. The rest act as collaborators, instead of officials charged with defending our Constitution against all enemies, including Donald Trump.

Even Mitt Romney and the now-former senator Jeff Flake have acted in inconsistent ways as they fear Trump in varying degrees.

After sometime-Trump-supporter John McCain died in 2018, the once vocally anti-Trump Lindsay Graham of South Carolina went all-in for Trump. Graham is a profile in cowardice.

That elected Republican officials and some Democrats so fear Trump they will enable his attack on our Constitution, or at least look the other way, tells us that we are not safe so long as Trump holds office. If he gets away with his dictatorial moves in Portland now, we may all soon discover that our liberties are but a memory.