Will Joe Biden repeat Obama's mistakes? Because repairing our damaged democracy is critical

Joe Biden sees himself as a healer — as a campaign strategy, it's working. Governing is quite a different matter 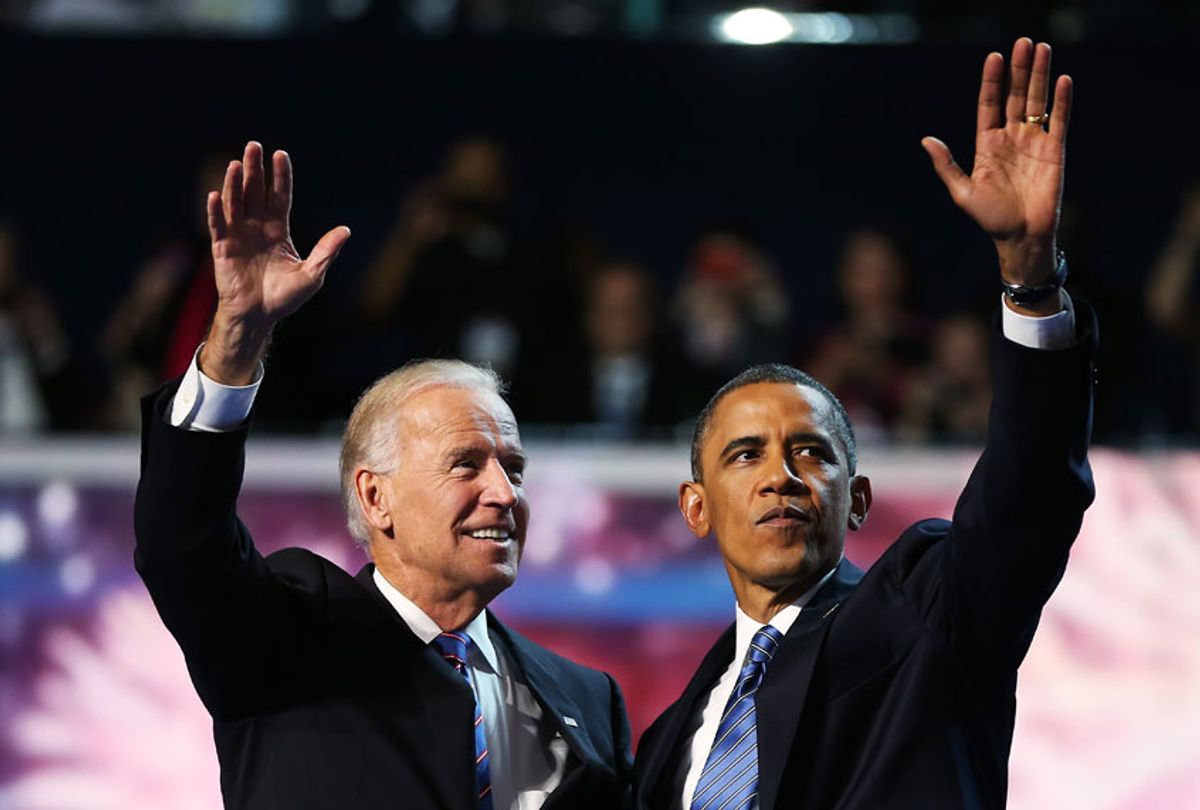 I don't know how many people have been watching Joe Biden's speeches or reading about his policy rollouts, but they've really been quite good. This week's socially-distanced conversation between Biden and Barack Obama was well done. These events may be under the radar but if the polls are any gauge whatever Biden is doing, or not doing, is working.

Biden is offering much more progressive policies than I think people expected and his rhetoric is exactly right for the moment. In contrast with Trump's callous ignorance about what people are going through in this nerve-wracking crisis, Biden offers empathy and understanding in a way that is obviously authentic and heartfelt.

He has also demonstrated a willingness to sit down with people with whom he has policy differences and engage respectfully, in a way that shows he understands policy in a serious yet personal way. This dialogue with the health care activist Ady Barkan is an excellent example of his ability to listen and show open-minded consideration of views that challenge his own.

In this moment of national angst, it may just be that Joe Biden turned out to be the right man to challenge Donald Trump, for reasons we could not have anticipated six months ago.

So far, within the weird constraints of COVID-19, Biden is running a pretty skillful campaign designed to reassure progressives that he's heard their demands, while also reassuring independents and some regretful Trump voters that he's a safe harbor. Perhaps all concerned are so desperate to get rid of Trump that they are willing to cut him a lot of slack, but he hasn't stepped on his own storyline and that in itself isn't easy.

But the reality is that even if you set aside the three and a half years of chaos that had Trump's campaign floundering even before the pandemic hit, his shocking demonstration of ineptitude and indifference to suffering has made that pitch more effective than it would have been before. I don't think anyone would have predicted last January that the most technologically advanced nation in the world could be so incompetent and heartless that within a few months it would end up leading the world in death and illness in a global pandemic, all due to the lack of decent, capable national political leadership. This kind of failure really was unthinkable.

Donald Trump's incompetence and narcissism contrasted with Joe Biden's compassion and experience is the framework for a campaign that really isn't about restoring America's soul or its "greatness," but rather about restoring Americans' confidence that their government is even capable of recognizing their distress and delivering basic services, much less upholding its democratic ideals.

If Biden wins the election and we get through the transition without a constitutional crisis and civil unrest (and both are very possible) his administration will immediately have to deal with the economic fallout resulting from Trump's mishandling of the pandemic. It's highly likely that the health crisis will still be acute as well. On top of that, there will be an immediate need to deal with foreign policy and national security issues, as well as a full appraisal of the destruction wreaked on the administrative state, particularly with respect to environmental and financial regulation. It's a lot.

But as much as I think that Biden's campaign of unity and healing has been effective, I'm terrified that spirit will carry over too far into actual governance, to the extent that the assault on democracy we've seen under the Trump administration is swept under the rug — much as the electoral hardball and abuses of power during the Bush administration were ignored when Obama took office. He too ran as a "uniter" and was forced to face a major crisis from the moment he took office. Obama and his closest advisers decided they would not "look in the rearview mirror" because the new president was convinced he could deal with the Republicans in good faith. He set out his disastrous proposal for a Grand Bargain, including major budget cuts, even before he was inaugurated.

That mistaken assumption of goodwill was rewarded with total GOP intransigence and an obstructionist "grassroots" movement funded by big-money interests that fought the new administration every step of the way. And I would argue that the Obama administration's unwillingness to hold the Bush administration accountable for its crimes and misdeeds led inexorably to the disaster we've experienced under Donald Trump. The lesson the Republicans took from what Bush did (and yes, what Reagan and Nixon did too) was that they could get away with anything.

The damage Trump and his accomplices have done to our democracy is just as thorough as the disaster of his incompetent pandemic response and the resulting economic chaos. Unless the next administration treats that with the same urgency there is every reason to believe that the corruption, the shattered norms, the nepotism and cronyism, and the desire to use federal law enforcement, the military and the courts for partisan and personal purposes will be a permanent fixture of any administration led by a president with authoritarian impulses. (Tom Cotton, Liz Cheney and Josh Hawley are all out there waiting.)

Right now, we have a rogue Department of Homeland Security and a corrupt Department of Justice literally sending paramilitary troops into American cities, largely or entirely to stoke a violent reaction because Trump believes that will help him get re-elected. The director of national intelligence, John Ratcliffe, is an unqualified Trump flunky put in place to protect him and provide partisan actors with information to smear their political enemies. God only knows what foreign actors are "helping" them do that.

Just as Trump seems incapable of perceiving that he cannot get the economy back on track without dealing with the pandemic, Democrats have refused to accept that they cannot attempt to fix the nation's problems until they fix the underlying wreckage of our democracy. That means they must hold hearings, form commissions, write new laws and otherwise tackle this ongoing Republican assault on our democracy once and for all. If Biden's  Department of Justice independently finds that laws were broken, they should prosecute. This simply cannot be ignored any longer.

I don't think anyone would argue that America isn't sick right now, both literally and figuratively. Joe Biden sees himself as a healer and, as I've shown, it's a compelling part of his appeal. But you don't heal a deep, festering wound just by putting a Band-aid over the problem and pretending that everything is fine. I think Trump has proved that. Biden and the Democrats must face up to the hard work of fixing our democracy if we expect it to survive. I wish I had more confidence that they were up to the task.