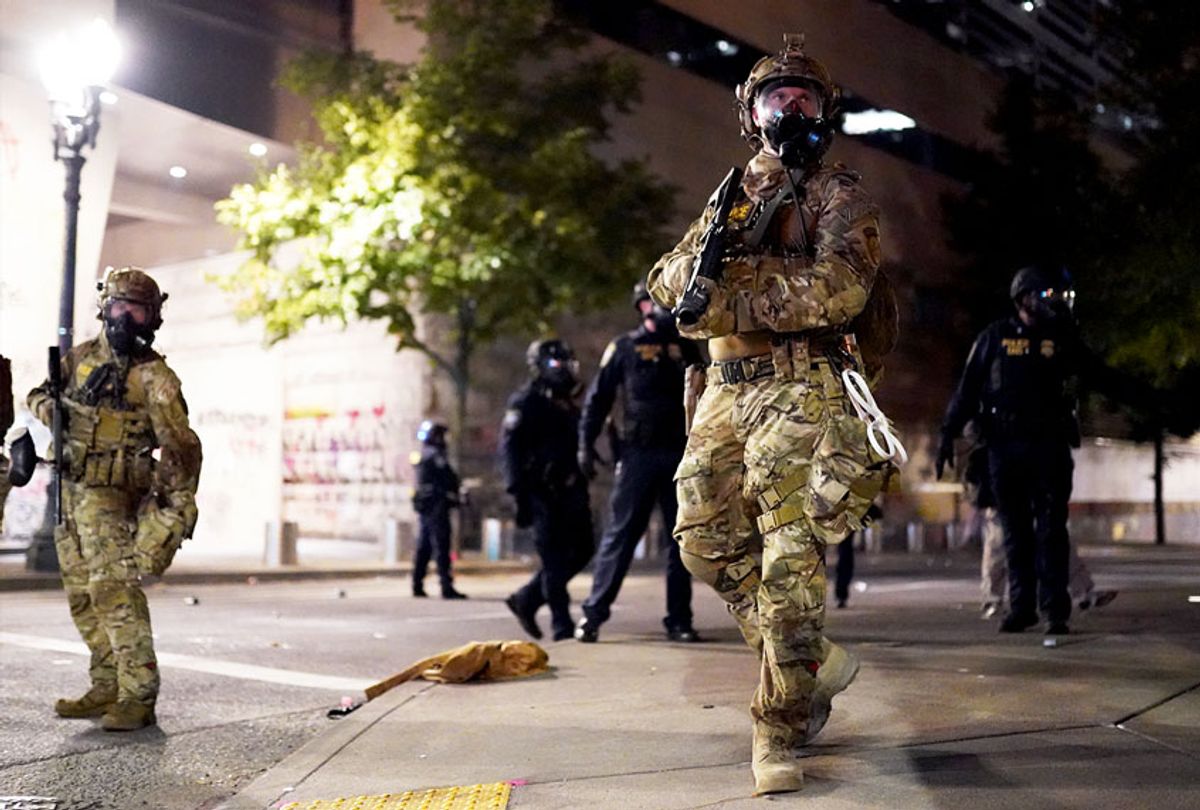 A federal officer watches a crowd of protesters during a standoff between the two groups at the Mark O. Hatfield U.S. Courthouse on July 21, 2020 in Portland, Oregon. State and elected officials have called for the federal officers to leave Portland as clashes between protesters and federal police continue to escalate. (Nathan Howard/Getty Images)
--

If the street scenes during protests in Portland, Oregon, looked familiar this week, it's because you've seen them before … in Iraq.

Heavily armed troops in camouflage garb with helmets and tactical vests moving through a community like an occupation army? Check.

Hostile civilians gathered together on the street in protest of the occupation army? Check.

Complete lack of knowledge about the civilian population on the part of the occupying army — whose members are not from the area and are there on temporary assignment? Check.

No lines of communication between the two sides? Check.

Random civilians grabbed off the street and hustled away to God-only-knows-where without probable cause or criminal charges? Check.

Stagnant situation on the ground that doesn't get better no matter how many troops are moved in and how many civilians are grabbed off the street? Check.

Occupying army operating on orders from distant commanders far away from the action, who have limited information from the scene and no local authority? Check.

The whole thing deteriorating into a quagmire from which neither side will back down? Check.

It's so eerily similar, the old quote from then Secretary of Defense Donald Rumsfeld comes to mind: "You go to war with the army you have, not the army you might want or wish to have at a later time," he told a group of soldiers who were complaining about the haphazard manner of their assignment to Iraq and their lack of proper equipment.

That's precisely Trump's problem, isn't it? He hasn't been able to "go to war" with the army he wants against Black Lives Matter protesters — because his real army has refused to take the battlefield. Remember? That happened after Trump used some National Guard troops under federal control to clear protesters out of the way near Lafayette Park for his disastrous photo-op with a borrowed Bible outside St. John's Church on June 1. It turned out that Trump had somehow mouse-trapped the chairman of the Joint Chiefs of Staff, Gen. Mark Milley, to accompany him.

But shortly after that, Milley and other military commanders reacted forcefully and negatively to Trump's use of active-duty soldiers against peaceful protesters. By the end of the week, all regular Army soldiers had been sent home from their temporary assignments to Washington, and military leaders had drawn a line in the sand that they would not cross. Without threatening to disobey orders from the commander in chief, military leaders made it clear that they would not facilitate Trump's militarization of his response to protesters around the country.

Trump wanted a show of force against protesters who had taken to the streets to show their support for Black Lives Matter. Protesters were in the streets by the thousands to protest the killing of George Floyd as well as other killings and use of force against Black Americans by police. Trump seized on the spreading unrest to launch a new push for "law and order" in an effort to boost his sagging campaign for re-election.

But where? And how? It looked at first like Trump would order the streets cleared in downtown Seattle, during the period when they were occupied by protesters, but Seattle took care of that with their own cops. So he focused his attention on the uprisings in Portland that had been going on nightly since the end of May against both the Floyd killing and the death of Jason Washington, a Portland resident killed by police in 2018.

Trump couldn't order in the 82nd Airborne Division. He tried that in Washington and failed. So he ordered William Barr, his attorney general, and Chad Wolf, the acting secretary of homeland security, to cobble together a homemade militia using officers from Immigration and Customs Enforcement, the Transportation Security Administration and Customs and Border Protection.  These are civilian enforcement agents trained to patrol the borders with Mexico and Canada, check travelers at airports for contraband in their carry-ons, and inspect shipments of imported goods coming across our borders from foreign countries.

How do you create an intimidating army out of a bunch of civil servants whose previous experience in law enforcement has been locking up little kids and their moms along the border and frisking traveling salespersons at airports for bottles containing more than three ounces of shampoo?

Drape them in plenty of camo, of course. Give them a budget and turn them loose on the internet to visit sites like TacticalGear.com, where you can buy everything from a Condor Three-Fold Mag Recovery Pouch to High Speed Gear Taco Kydex handcuff pouches to Blackhawk Highstorm Advanced Tactical Elbow Pads V2 to a Condor Open Top M4 Mag Pouch to a Safariland Quick Release Leg Strap SLS Tactical Thigh Holster to a Hazard 4 Small ID Window Patch.

No, on second thought, forget the Hazard 4 Small ID Window Patch. You won't be needing that particular piece of camo tactical gear because you won't be displaying any identification at all.

The unmarked, unnamed Trumpian shock troops look like they've been assembled from an off-the-shelf parts bin. It's lame-o "law and order," done on the cheap. And that's the problem with insta-militias like the one deployed in Portland and those planned for deployment to Chicago, Albuquerque, and other metropolitan areas around the country with mayors who happen to be Democrats. How intimidating can a pretend army be if it's wearing patches that say  "Transportation Security Administration"? What are protesters going to do? Throw up their arms and cry out, "I give up! I forgot and packed my nail clippers!"

The camo-goofs sent out by Barr and Wolf to terrorize protesters in Portland are using tear gas, "non-lethal" riot control weapons, and paintball guns firing pepper pellets. Some photographs from the scene in Portland clearly show these government militia armed with M4 rifles and carrying 9mm handguns in leg holsters, but there have been no reports of lethal ammunition being used against protesters. Yet.

Protesters have been wearing bicycle helmets, goggles, face shields and heavy clothing, including some tactical vests probably purchased from the same outfitters the militarized government thugs use.

Recently, the protesters in Portland have had some success against the government militias by arraying a "Wall of Moms" with interlocking arms against the armed government troops. When tear gas was used against the moms, dads began showing up armed with leaf blowers to dissipate tear gas away from protesters. They are the same tactics used by the Yippies in Chicago in 1968 when they showed up at the Democratic National Convention and announced they would run a 145-pound pig named Pigasus for president.

Sometimes confronting force with humor is the best tactic. Moms in yellow T-shirts and dads with leaf-blowers are the perfect way to show up Trump as a pitiful helpless giant. His moves to bring fascism to the streets of America are working about as well as his attempts to wish away the virus that is ravaging the country in a silent riot of disease and death.

Donald Trump is a toy fascist. This time we don't need the Yippies to run a pig for president. The Republican Party is doing that for us.