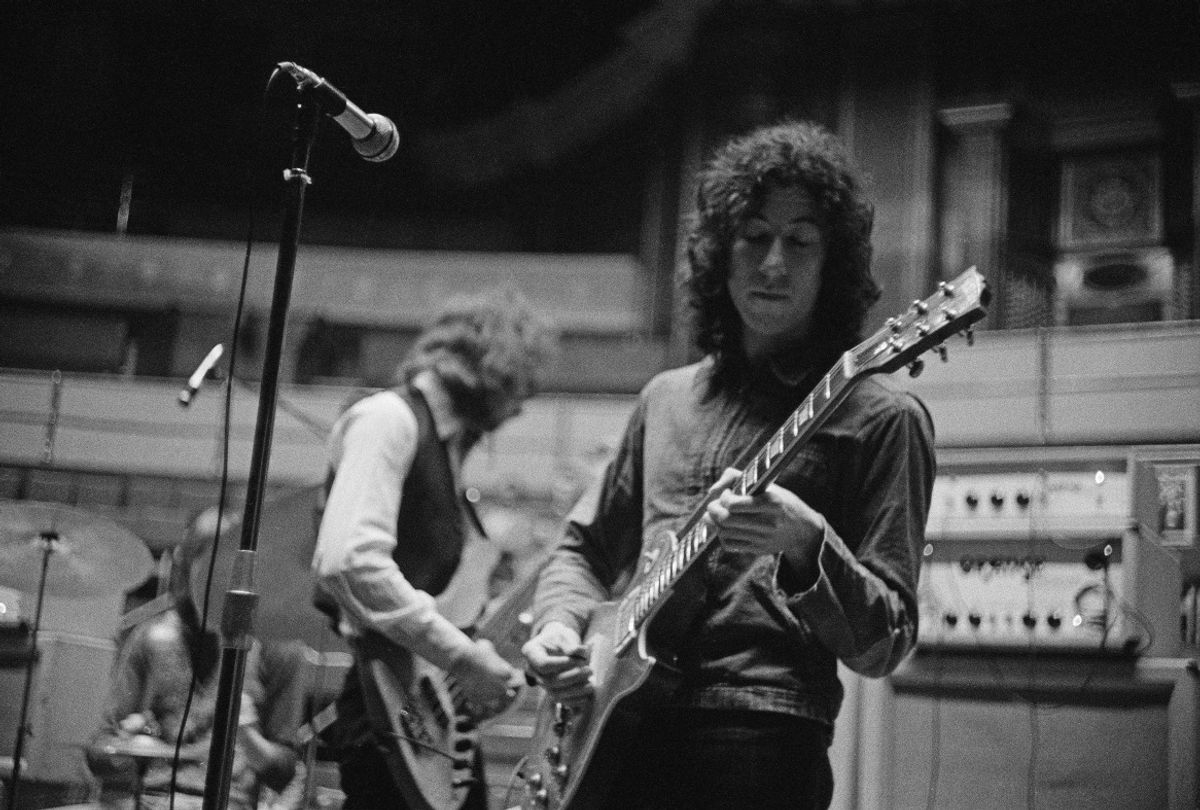 Peter Green, founder of Fleetwood Mac and the band's widely admired guitarist and vocalist in its early years before drug abuse and mental illness foreshortened his career, has died. He was 73.

Solicitors acting on behalf of his family said in a statement, as reported by the BBC: "It is with great sadness that the family of Peter Green announce his death this weekend, peacefully in his sleep.

"A further statement will be provided in the coming days."

"Peter, in his prime in the '60s, was without equal," said John Mayall in "Man of the World," a 2009 BBC documentary about Green. "He was a force to be reckoned with."

In 1966, Mayall helped establish Green as a guitar hero when he hired the 20-year-old musician to replace Eric Clapton in his blues-rock unit the Bluesbreakers.

Green's liquid tone (produced on a 1959 Gibson Les Paul) and lyrical, imaginative solo work instantly made him one of England's most highly rated guitarists. After only a year and one album with Mayall, he exited to start up his own band, which he christened Fleetwood Mac in honor of his Mayall colleagues who ultimately became its rhythm section, drummer Mick Fleetwood and bassist John McVie.

With co-lead guitarist/vocalist Jeremy Spencer, Green fronted a powerful quartet that delivered a stirring brace of Chicago blues covers and some of their own similarly styled material.

One Green "original" of this era, the minor-key "Black Magic Woman" – essentially a straight lift of Chicago guitarist Otis Rush's classic 1958 recording "All Your Love (I Miss Loving)" – became a No. 4 U.S. hit for Santana in 1970.

The band rapidly morphed into a powerful and versatile hard rock unit that won a growing fan base in America with its live shows; it scored a U.S. major label deal that it would retain for 50 years.

However, Green's disillusionment with the music business, deepening involvement with psychedelic drugs and mental instability led him to exit the band in May 1970, days after the release of the doom-infused, keening single "The Green Manalishi (With the Two Prong Crown)," his last work as a member of Fleetwood Mac.

Green's discontinuous solo career began with the all-instrumental 1970 solo album "End of the Game." But his escalating psychiatric problems, diagnosed later as schizophrenia and treated with electroconvulsive therapy, led to his arrest in 1977 after he threatened to shoot his accountant with a pump-action rifle.

He told his biographer Martin Celmins in 1996, "I guess I took one trip too many."

Following extended hospitalization, he lived with his family. Though he returned to recording in the late '70s, he wrote little of his own material; his wife and his brother Mike penned the majority of the songs for his albums of the '80s.

After another protracted layoff from music, Green weaned himself off his psychiatric medications; rejuvenated, he returned in 1996 with his Splinter Group, devoting himself largely to performing the classic blues repertoire.

He was inducted into the Rock and Roll Hall of Fame as a member of Fleetwood Mac in 1998.

He was born Peter Allen Greenbaum in London's East End on Oct. 29, 1946. He got his first guitar from his brother Len, after his older sibling became disinterested in learning to play the instrument. An early influence on his style was Hank Marvin, lead guitarist for the Shadows, but his playing came to encompass the styles of such American blues stylists as Otis Rush, B.B. King and Freddy King.

Green played both bass and guitar for London acts that included the Muskrats and the Tridents. His highest-profile gig before joining Mayall's band was as lead guitarist for keyboardist Peter Bardens' group the Looners.

He coveted Clapton's role in Mayall's popular blues group, and when the presence of the group's established star became intermittent in 1966 before he left permanently, his persistent lobbying of the Bluesbreakers leader paid off with a substitute gig. Green took the guitar chair permanently with Clapton's departure for Cream.

Green recorded "A Hard Road," his only full set with Mayall, with a rhythm section that included McVie and drummer Aynsley Dunbar; the latter was ultimately replaced, very briefly, by Fleetwood. The album featured a haunting instrumental penned by Green, "The Supernatural," which prefigured his similarly impressionistic work with Fleetwood Mac.

By 1967, Green's reputation among British blues guitarists was nearly the equal of Clapton's, and, seeking more control over his career, he exited Mayall's group. Fleetwood, whom Mayall had sacked for persistent misbehavior, joined immediately, while McVie, who was hesitant to leave his salaried status with his long-term boss, came aboard after making another album with the Bluesbreakers.

With Spencer handling Elmore James-style slide numbers and Green essaying flashy single-string solo work, Fleetwood Mac scored immediately in the U.K. with its self-titled debut album (No. 4, 1968) and the follow-up "Mr. Wonderful" (No. 10, 1968), both cut with producer Mike Vernon.

After Kirwan was added to the lineup in early 1969, the band traveled to Chicago to record another set of pure blues with such local stars as guitarist Buddy Guy, pianist Otis Spann and harp player Walter Horton at Chess Records' fabled studio.

But by the time of that session, "Albatross" had vaulted to No. 1 on the British chart, and Fleetwood Mac's sound altered quickly and dramatically; a U.S. tour on which they played several dates with the Grateful Dead had introduced them to both the San Francisco group's jamming style and (via the American band's sound man and in-house chemist Owsley "Bear" Stanley) the potent hallucinogen LSD.

Green's introspective "Man of the World" — a song guitarist Spencer later described as "almost like a suicide note" — and the two-sided electric/acoustic opus "Oh Well" both hit No. 2 on the British charts in 1969. One of the best known songs of Green's era with the band, "Oh Well" has been covered by artists ranging from Tom Petty & the Heartbreakers to Haim over the years.

Those ambitious singles were followed by the album "Then Play On," released in the U.S. by Warner Bros.; there, Spencer remained largely sidelined in favor of a biting two-guitar attack by Green and Kirwan. The collection contained Green's latter-day concert showcase "Rattlesnake Shake."

By early 1970, Green was beginning to show the signs of severe mental illness; some observers believe his condition was exacerbated during the band's tour the previous year by an acid trip at Munich's notorious hippie enclave the Highfisch-Kommune. (According to Fleetwood and McVie in the "Man of the World" documentary, Kirwan also partook at the party and suffered from mental illness afterward. Kirwan died in 2018.)

Green railed against rock 'n' roll materialism, gave away his money and property and unsuccessfully asked his band mates to divest themselves of their earnings. He announced his intention to leave the band that spring.

Following his departure from Fleetwood Mac, Green returned for sporadic guest appearances: He briefly substituted for Jeremy Spencer, who had himself bolted the band to join the religious cult the Children of God, on a 1971 U.S. tour, and he made cameo appearances on the albums "Penguin" (1973) and "Tusk" (1979).

Green's condition deteriorated precipitously following the release of the jam-oriented "The End of the Game." In the late '70s, he suffered what biographer Celmins described as "a full-blown nervous breakdown." Though he returned to recording and live performing with his guitar skills largely unimpaired, he would never pen another memorable composition.

However, he ultimately reclaimed his musical career and, taking the stage arm-in-arm with Fleetwood Mac's latter-day star Stevie Nicks, he appeared at the band's Rock and Roll Hall of Fame induction in New York in 1998. He continued to perform and tour over the years.

Divorced from Jane Samuels Green, he is survived by their daughter Rose Samuels-Greenbaum.