Street smart: The case for closing streets to cars — and opening them to schools

Our city's streets are an untapped asset, where we can move K-12 classrooms cheaply and safely 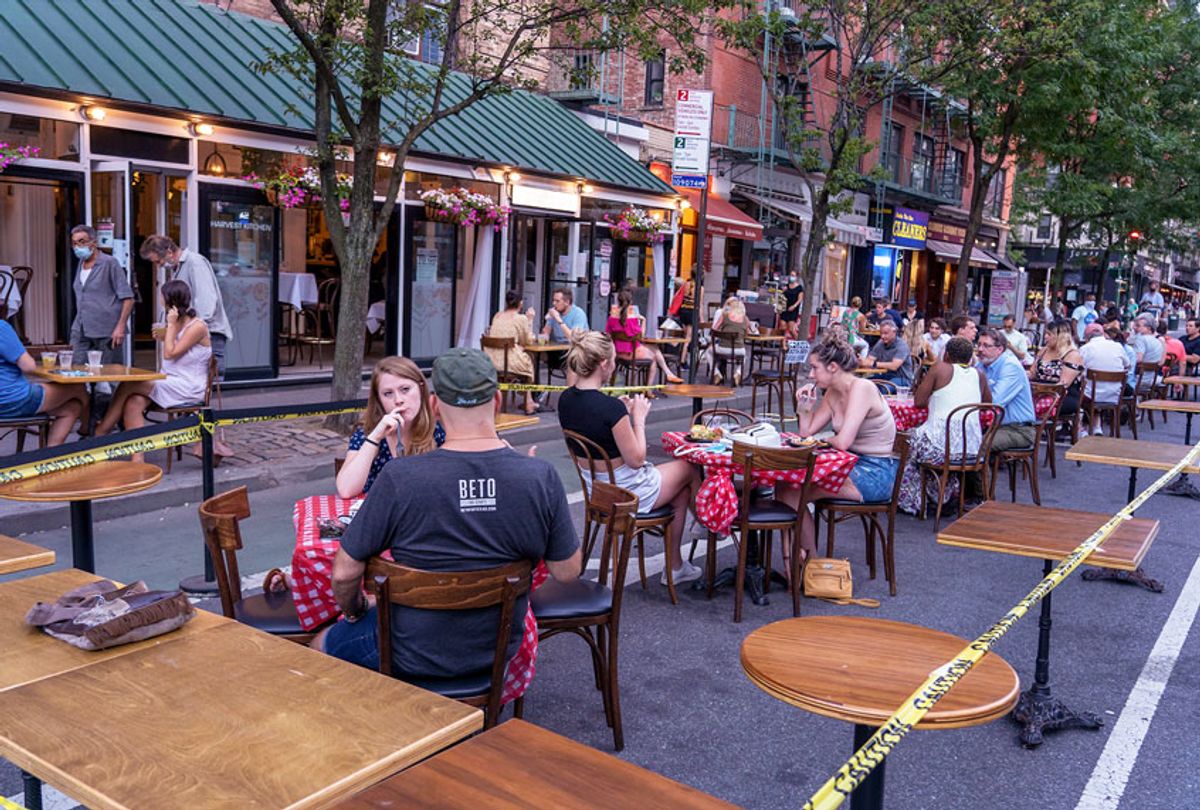 Harvest Kitchen restaurant has extended its outdoor area by setting tables on the street for their customers as the city moves into phase two re-opening from the coronavirus pandemic in New York City. New York State Governor Andrew Cuomo has announced that New York is on track for Phase 2 re-opening. (Ron Adar/SOPA Images/LightRocket via Getty Images)
--

A slogan of Parisian protesters in the 1960s, seen in graffiti and chants alike, ran like this: "At the end of our streets, the stars." The maxim encapsulated a positive vision of urban spaces beyond the repressive and car-choked hellscapes they'd become under the weight of modernity. Now, as more and more cities experiment with closing streets to vehicular traffic and opening them up to pedestrians, the Parisians' utopian sentiments are becoming more common.

Examples of successful street closures abound around the globe. Few cars drive down Broadway in midtown Manhattan these days; not since the street was closed to vehicular traffic and transformed into an open-air plaza lined with tables and benches. Following the World Trade Center attacks, New York barricaded many of the streets in the Financial District, creating a pedestrian corridor that nearly two decades on, has become a vital pedestrian thoroughfare. Now, to alleviate the crowded conditions that public parks are experiencing as sun-starved residents emerge from months of self-quarantine, the city is exploring the possibility of strategically closing cross streets. In Europe, metropolises from Madrid to Milan, Barcelona to Berlin, have all benefitted from closing streets to cars and converting them to other uses. Paris is looking to expand its sidewalks to accommodate social distancing by appropriating more than 70% of its on-street parking spaces.

Yet the most important role for urban streets may lie ahead. As city schools look for guidance about reopening, one option literally waits outside their door: Closing off the streets in front of schools and turning them into classrooms. This "found space"— which, it's critical to note incurs little or no cost to create at a time when cities' tax-revenues are declining precipitously and operations budgets are being cut—satisfies common-sense social distancing practices that current indoor classroom configurations typically preclude.

To this end, may I propose an analogous refrain of the Parisian appel aux armes: 'At the end of our streets—our stellar schools.'

Once schools reopen, parents everywhere can get back to work and rebuild the economic growth cycle in restaurants, retail, and the myriad of mom-and-pop enterprises that have vanished (hopefully not permanently) in the past several months.

Getting our schools open for our children triggers the reopening of our communities and must take top priority. It needs the cooperation of city agencies; in particular the municipal departments that control streets and sidewalks.

If streets can become parks for the citizens who can no longer enjoy the city's pools and playgrounds, why not also turn them into classrooms when our children are ready to return to school?

In fact, our streets already are classrooms. Anyone growing up in the city is familiar with the phrase "street smart": It's what happens when our children play tag, hide and seek, pick-up ball, and eventually find their way safely around the neighborhood. Modern educators see the value in this kind of "experiential learning" — the opportunity for children to learn through unstructured, hands-on play and making activities. What better way than to teach by example, and respond to this pandemic by creatively repurposing one thing into another?

In practical terms, reopening schools hinges on reducing the number of children in the classroom at any given time. Just like in our workplaces, where planners are discussing staggering employees to take turns working remotely from home, educators are also looking at that option. The problem with that idea is that parents will have to stay home too, so it's not an ideal solution. But do the math: If a school can double its number of classrooms, it can cut the occupancy of those rooms by half.

It's a little stretch of the imagination, but by setting up learning environments in an empty, secure street using moveable partitions and stackable/collapsible furniture, teachers and students can plan and design custom-made spaces, improving the iterations on a weekly basis, while partnering in the transformation and problem-solving with their own hands and minds.

In inclement weather, students could stay at home, in a variation on the traditional snow day celebration. But during most of the shoulder seasons, the fresh air and natural light are welcome assets. Schools in rainy locations might look to London-based theatre consultants Charcoalblue, who are working on plans for a pop-up venue that can be easily assembled for outdoor events; street-schools could adapt that same kind of flexible, mobile model to their needs.

If city leaders, agencies, and school authorities are willing to play in the same sandbox, they can transform the streets with a coat of water-based paint, turn fences into chalkboards, erect heated tents, and roll out outdoor sinks and water fountains — all actions that can deployed immediately

For one year, let's dedicate the valuable, flat, and accessible square footage we now cede to parked and moving fossil-fuel-consuming polluters (whose absence in the past several weeks city dwellers around the world have so enjoyed!) to our children.

Extreme weather would be the only reason why half the class would have to work remotely from home, but then again, who doesn't love a snow day—even one in spring?