Trump's myth-making mistake: His campaign projects his delusions and failures onto Biden 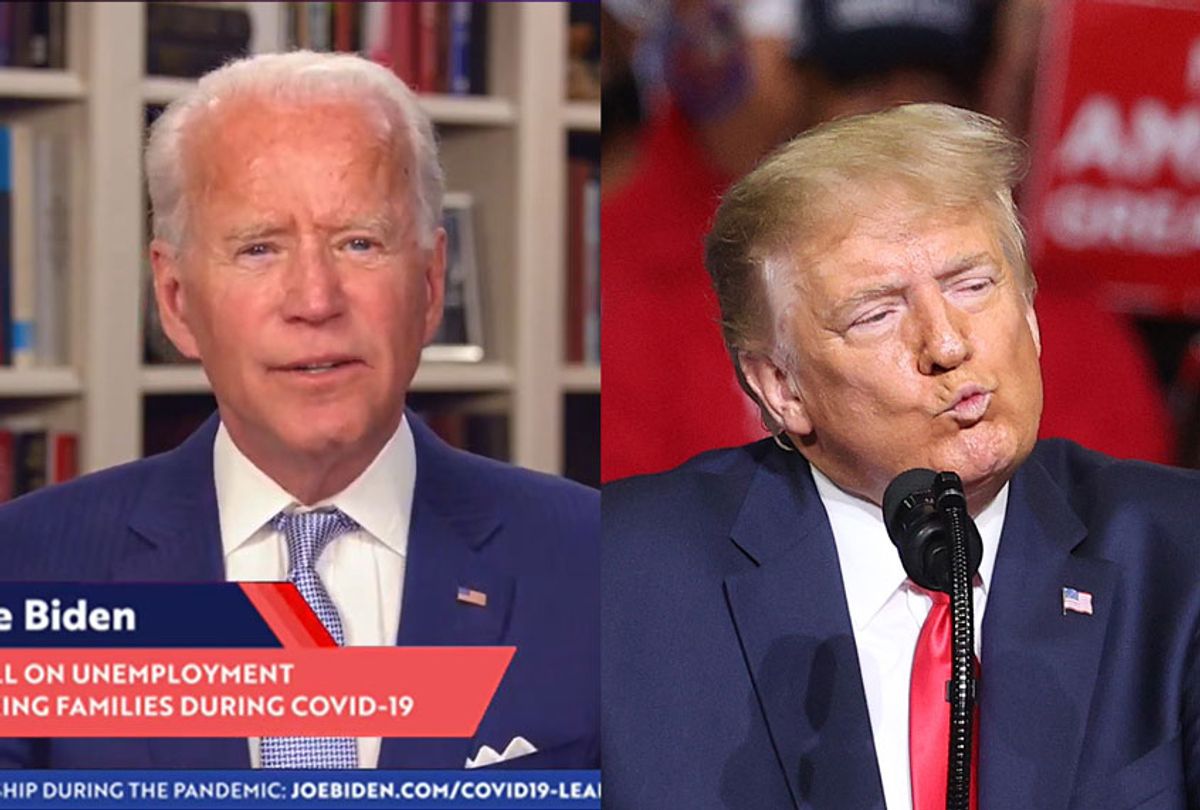 Down in the polls, Donald Trump is betting that voters will decide only that Joe Biden will look worse.

To me, just how Trump is doing that is more than concerning: Trump is choosing an unsubstantiated, scattershot campaign based on myths and false associations that present dangers that just are not borne out.

If Trump actually believes in Trumpism, anti-immigrant policies, preservation of racist symbolism, his tariff-laden approach to foreign trade and security issues, his bull-in-a-china-shop approach to foreign affairs and support of only the wealthy, he should stick to those.  Obviously, he should knock off his braggadocio about leadership during the coronavirus, since we are losing that fight Bigly.

Still, calling out Biden as a demon who will invite widespread riots and social rot seems unnecessarily over the top. They just disagree about approaching divisiveness and direction as president.

Let's agree that there has been a continuing fountain of media commentaries about the gap between the world as Trump sees it and the realities of coronavirus, joblessness, recession-like economics, international and domestic racial strife.

But as the Trump campaign is suggesting in its ads, in Trump's remarks, written and ad-libbed, if you don't like what you have now, it'll be worse under Biden, whom Trump constantly seeks to belittle and to paint alternately as a doddering fool or an extreme leftist.

Meanwhile, the Left, which now has become a disorganized amalgam of anyone anti-Trump, is most happy that Biden is not Trump, and somewhat only reluctantly accepting of a Biden who is making efforts to include enough progressive stances in his quiver to keep Democrats united.

Still, the consensus seems to be that Trump is having trouble making his dystopian view of Biden-as-leader stick.

We can also agree that politics as is practiced in these United States has never been pretty or straightforward. Exaggeration, partisanship, monied interests, gerrymandering and other electoral tricks are always part of the scene — whether foreign actors are involved or not.

But here's a typical line of attack, this one from a Breitbart.com news report picked up and promoted thematically by Tucker Carlson on Fox and social media: "Joe Biden's radical proposal for the Democrat Party platform for 2020 seeks to put an end to America's suburban communities by forcing low-income housing into every neighborhood and flooding every community with immigrants, legal or otherwise."

Yes, general platform-type statements for the Biden camp include support for expanding affordable housing and enforcing Fair Housing Act provisions, that there should be a comprehensive approach to immigration and that we should do whatever is possible to address racial, income and class distinctions.

But ending suburban communities? Hardly. If anything, Biden's current successes in polling seem to ride on more suburbanites switching camps to support him. It's a sample of the turning and twisting – something both sides are good at – of well-intended aspirations to make them sound like anti-choice, anti-individual, anti-local decision-making.

Trump held an expansive "press conference" in the Rose Garden this week that was, by multiple accounts, a rambling monologue mostly attacking Biden (31 times) and Democrats. By most measures, it was more campaign rally talk than national policy.

To Washington Post columnist Dana Milbank, it was "an hour-long diatribe against Joe Biden, attributing a platform to his Democratic opponent that bore hardly any resemblance to anything occurring in the real world."

Among Trump's contentions: Biden will incentivize illegal alien child smuggling," "abolish immigration enforcement," "abolish our police departments" and "abolish our prisons, I guess." Democrats are even "calling for defunding of our military," Trump said. Democratic mayors possibly "wouldn't mind" if terrorists "blow up our cities."

Milbank asked: "Um, Biden would abolish windows? "I'm not making this up!" Trump said, mid-jeremiad. (Actually, he was)."

While presidents have used their office to campaign for reelection, "Trump's reinterpretation of that approach was downright bizarre."

I think we're ready to vote now, but we must endure four more months of this type of depressing make-believe. It falls to us to hear all this (or switch off the messaging altogether) with some skepticism.

It seems a shame because even Trump acknowledges that these two candidates represent a very clear choice in a variety of actual policy positions, from climate change and environment to foreign policy to the role of race in society and income inequality. They have legitimate differences without resorting to made-up exaggerations meant to gin up fears.

As Trump grows more cornered politically, we can anticipate that he will make up more outrageous untruths to advance his own cause by denigrating Biden's.

For his part, Biden has presented ads depicting a mix of very positive, low-key assurances of caring about people during coronavirus as well as out and out attacks on the very practices that Trump presents as effective leadership. While opinionated, there appear to be fewer let's pretend moments in Biden's messaging. Instead, Biden is open to criticism about his actual record over 45 years in government, about his flexibility and responsiveness to a growing push to the Left and a persistent problem with gaffes.

The polls to date, which can be wrong, but are interesting for their trend differences,  seem to reflect much more anti-Trump than pro-Biden, if that makes a difference.