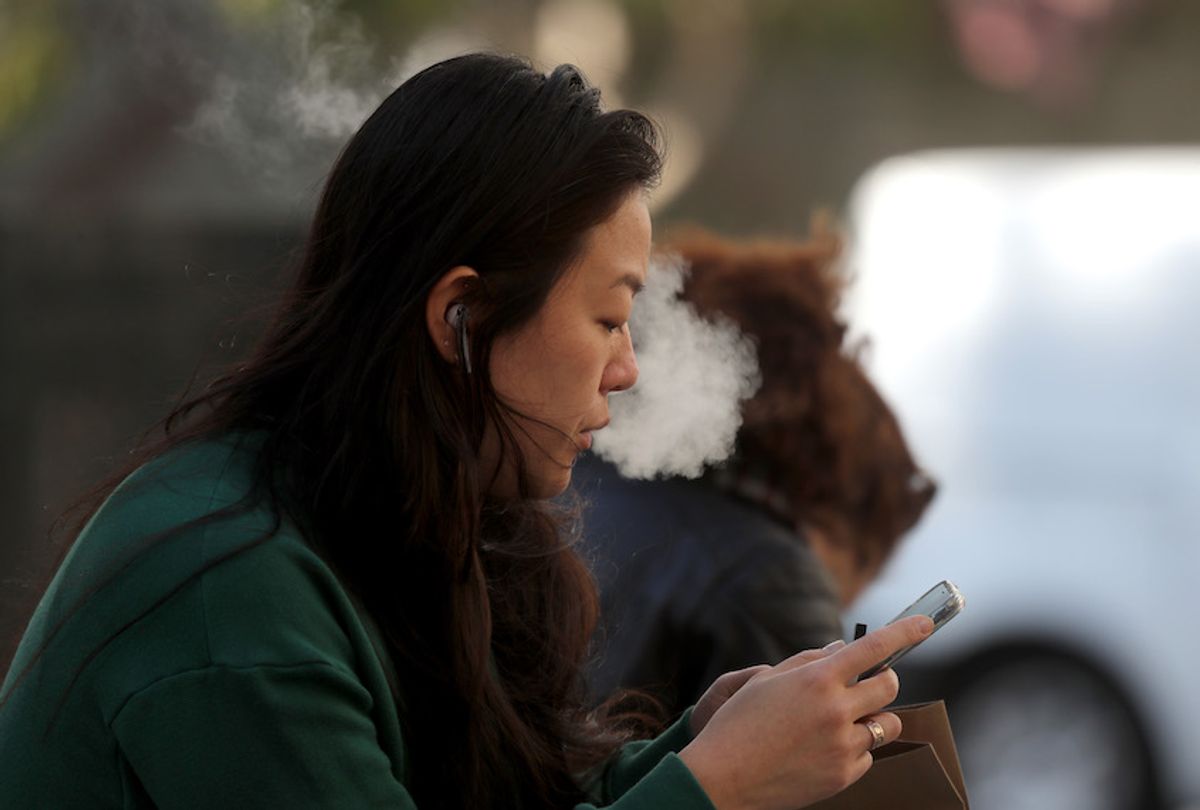 SAN FRANCISCO, CALIFORNIA - NOVEMBER 08: A pedestrian smokes an e-cigarette on November 08, 2019 in San Francisco, California. The Center for Disease Control (C.D.C.) has reported that an additive sometimes used in vaping products known as vitamin E acetate may be the cause of a national outbreak of e-cigarette-related lung injuries that has been linked to dozens of deaths. (Photo by Justin Sullivan/Getty Images) (Justin Sullivan/Getty Images)
--

The Food and Drug Administration has issued warning letters to 10 companies it says are illegally selling flavored e-cigarette products that have come under attack as targeting teens.

FDA Commissioner Stephen Hahn said in a press release that the agency was concerned about the soaring appeal of e-cigarettes to youth. The letters identified products being marketed with images of candy, soda and cartoon ninjas, and directed the companies to stop selling the offending brands. Companies that fail to comply with FDA warning letters may face product seizures or civil penalties.

One of the FDA letters went to Cool Clouds Distribution Inc., and its CEO, Umais Abubaker, who the agency said sold the wildly popular Puff Bar e-cigarette brand through the website puffbar.com. A lawyer who has represented Cool Clouds said it is no longer distributing Puff Bar products.

For reasons that are unclear, the FDA did not include other companies and individuals known to have been involved in Puff Bar sales, including Puff Bar, a California corporation that distributed the brand's disposable vapes, and DS Technology Licensing LLC, a Delaware corporation that owns trademarks for Puff Bar products.

In an email to FairWarning, an FDA spokeswoman did not indicate why the others were not included, but said the agency "determined that the most responsible person and firm for these online violations" are Abubaker and Cool Clouds. FairWarning was unable to reach Abubaker.

Matthew Myers, president of the Campaign for Tobacco-Free Kids, said that while the FDA's actions are encouraging, he's concerned that this is just the start of a game of whack-a-mole.

"It's important to realize that some of the products that went off the market today, like Puff Bar, appear to come from multiple different distributors," Myers said. "And what isn't clear is if they've gotten all of the distributors."

That seems unlikely. FairWarning found that many of the Puff Bar devices cited in the FDA warning letter were available on other retail websites. DS Technology, for example, which owns trademarks for various Puff Bar products, has "numerous" licensed distributors in the U.S., according to the company's attorney, Todd Gallinger.

Until recently, a major retailer was the Puff Bar company, which listed Nick Minas and Patrick Beltran, both in their twenties, as CEO and chief financial officer, respectively. As reported by FairWarning, their previous e-cigarette marketing ventures had led to run-ins with regulators, including the FDA. In an interview, they told FairWarning they merely operated the puffbar.com website, and would not say who hired them. On July 13, the website announced it was ceasing sales.

Despite the likelihood that the prohibited products are still being sold, the flurry of warning letters was praised by public health advocates. They had criticized the FDA for exempting certain disposable e-cigarette products—including Puff Bar—from a general ban on flavored e-cigarettes announced in January.

"We're gratified that FDA has finally listened to parents' outraged voices about Puff Bar, one of the most egregious e-cigarette companies operating illegally and targeting our teens during the pandemic, no less," Meredith Berkman and Dorian Fuhrman, co-founders of Parents Against Vaping E-Cigarettes, said in an email.

As of this morning, many of the companies issued warning letters had removed products from their websites. But FairWarning found that many other products—mainly flavored e-cigarette liquids—could be easily found elsewhere. For example, a company called Vapedeal removed its listing for Strawberry Churrios by The Milkman, but FairWarning found it on other vape websites—including one owned by Nick Minas and Patrick Beltran.

Majestic Vapor was ordered to remove an e-liquid called "Steep Vapors – Pop Deez" that came in what looked like a popcorn box. But the FDA did not mention a similar e-juice on Majestic's website—Cinna Pop Deez—that is advertised in a package that has imagery of caramel popcorn. Another e-liquid sold on Majestic's website, "Fuggin eLiquids – Rainbow Road," shows a bottle surrounded by scoops of ice cream. A different company removed an image that the FDA flagged but left the product up for sale.